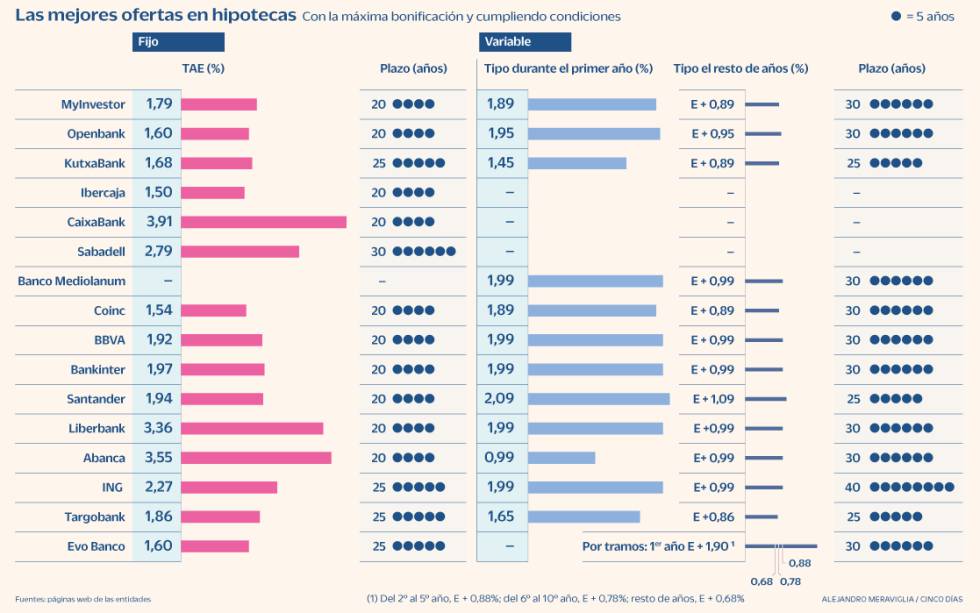 After the stoppage a year ago due to the arrival of Covid-19, the resurgence of the demand for housing has redoubled the bank’s commitment to the mortgages, stoking the commercial battle that has been fought for some time. The financial entities they want to regain the market lost during lockdown and restrictions and are willing to further improve their offerings to capture – and also steal – mortgage customers. The result is being the launch of aggressive campaigns, more interest reductions and improved conditions to assume loans from other banks, which is known as subrogation, which also guarantees a portfolio of debtors with solvent profiles.

The recovery of the economy after the worst of the pandemic is little by little favoring the purchase of houses and pulling the mortgage segment out of the pothole. After suffering a historical drop of more than 31% last January, activity seems to be reactivated and new operations shot up 35% in May, according to Statistics data. According to the president of the Spanish Mortgage Association (AHE), Santos González, although it is still too early to see if this trend will consolidate, “it seems that the market stagnation has been diluted and it seems that the stagnant demand, which always occurs in crisis situations and which has been expectant, sees the light at the end of the tunnel and it is getting animated ”.

When demand wakes up, the attractive proposals of the banks are contributing to a great extent, especially in terms of prices. The strong competition in the sector has led interests to minimum levels never seen before, especially in fixed rates, which on average are around 2.75% when before 2020 they had never fallen below 3%, according to the INE. With the Euribor hovering around minimums, which hurts banking income on the side of variable loans, the sector has focused on encouraging the hiring of fixed rates, with which it increases its margins. And this is where the mortgage war is truly being fought.

“It is more convenient for banks for customers to opt for a fixed interest rate. The entities have multiplied their hooks to attract customers, but the main hook is the cut in fixed rates. In this way, it is possible to speak again of a price war within the sector ”, they assure from the HelpMyCash financial comparator. And it seems that the strategy is paying off, as fixed rates are gaining more and more strength compared to variable rates and already represent 56.2% of new hires, a record percentage.

Also Read  My child is always angry, what should I do?

Mariola Soriano, research analyst at Instituto de Evaluations, also underlines that “this type of loan generates greater stability in the long term, a very desirable factor for both parties in times of economic uncertainty.”

Ibercaja offers a 1.5% APR and is at the level of digital banks such as Coinc

Several entities have positioned themselves in the fight for potential customers. Ibercaja recently lowered the interest on its 20-year fixed mortgage to 1.5% APR, thus placing itself at the level of digital entities, which tend to market the cheapest prices and have also reduced prices in recent weeks. Coinc announces a 1.54% APR, while Openbank and Evo Banco publish a 1.6% APR, although the latter has a 25-year term. Kutxabank also has stable rates of the lowest, of 1.68% APR. Santander, CaixaBank, Bankinter, BBVA, Abanca, ING and Liberbank have also lowered their fixed mortgages since the beginning of the year. In addition, entities such as Banco Santander or Caja de Ingenieros give lower interest to customers who can cover 30% or 40% of the purchase with their savings.

In general, they are discounted products and it is necessary to direct the payroll and take out some insurance. For its part, the MyInvestor neobank is distinguished by being the only entity that does not require linked products, or even carry assets. In case the client wants to take out insurance or investment products, then he receives an annual cash payment. Openbank also gives incentives and gives up to 1,000 euros to clients who bring them friends who need a mortgage. For its part, Banco Santander has launched a new mortgage for young people that finances up to 95% of the purchase.

MyInvestor does not require linked products and Openbank gives away up to 1,000 euros

Manuel Artal, director of commercial strategy at Ibercaja, declares that now “we are seeing a fairly dynamic market and in the first quarter the data confirm a consistent and increasing demand”. He points out that “before there were more levers to attract customers, such as deposits or accounts, but now mortgages are the only asset and it is logical that the focus of the bank is focused on this point.”

In variable mortgages, and despite the fact that some entity has raised spreads in recent months to offset the Euribor, such as Santander or MyInvestor, spreads below 1% can be found without problems. TargoBank offers 0.86% more Euribor.

This showcase of such low prices and a certain change in habits as a result of the arrival of the virus have led to an option that was once little used: the mortgage subrogation or change of bank to obtain better conditions in the interests, the terms or to get rid of related products. Following the statistics from Statistics, in recent months creditor subrogations have skyrocketed, more than 200% year-on-year last January and almost 500% in March. Similarly, subrogations to the debtor (change of owner) and novations (new agreement with the same bank) have stood out in a spectacular way. In this case, up to almost 700%.

The new one Mortgage law that came into force in June 2019 opened the door to subrogation, a practice that has been plunging banks into a veritable war to steal loans from the competition. “Through subrogation, experienced clients arrive who have already undergone the risk measurement of other banks,” something highly valued by entities, Santos González acknowledges. On the other hand, market sources explain that during home confinements, users have had more time to inquire about the new possibilities that the market offers to save. “More and more people discover that it is possible to change banks and pay less every month,” they comment.

MyInvestor was one of the first entities to detect this opportunity and launched an aggressive subrogation campaign. Now they account for 75% of its production. But the number of banks that offer this alternative has been multiplying and so do Deutsche Bank, Santander, Openbank, Bankinter, Kutxabank and ING. In the orange entity, surrogacy represents 6% of the demand, which increases to 14% if novations are included. As in Banco Santander, they have a savings simulator available to the client. “The final conditions that we apply depend on the degree of indebtedness, the term and the client’s profile.” And the same happens in Openbank, they clarify from the group chaired by Ana Botín.

Also Read  Amanda Gorman denounces having been a victim of discrimination: “One day you are an icon, the other a threat” | People

In the spotlight are all the mortgages formalized between 2009 and 2017, since they were signed at higher average interest rates than the current ones, so the subrogation allows a potential saving that varies between 10,000, 20,000 euros throughout the life of the loan, according to MyInvestor calculations. The entire banking sector ensures that it has noticed an increase in subrogations and that the trend is upward since 2020.

For its part, fromSinComisiones.org they believe that “the fact that a mortgage market is overweighting its portfolio of subrogations instead of its portfolio of new concessions means that it is not looking at future benefits, but rather the solvency of the debtors. The bank is giving priority to those who can pay over what they can pay ”.

Monetary politics. Although no rate hikes are expected in the medium term, further declines are not expected. In fact, from Ibercaja they point out that “market interest rates are tightening up.” In addition, the rise in inflation has opened the debate on the possible reduction of stimuli by central banks. In this context, banks already have little room to continue lowering loan prices. Manuel Artal presumes that “there will not be another moment of such tight mortgage rates and the logical thing is that in the medium term the trend will be a slight rebound, of 0.25% or 0.30%”.

Profit margin. With the Euribor on the floor, still close to -0.5%, and the fixed rates so low, the banks hardly get any income from mortgages. “The mortgage business is essential for banks and price discrimination is necessary to be competitive in such a wide market, but there are no margins for price wars,” says Santos González, who assumes that the sector is taking advantage of the demand pull after the pandemic.