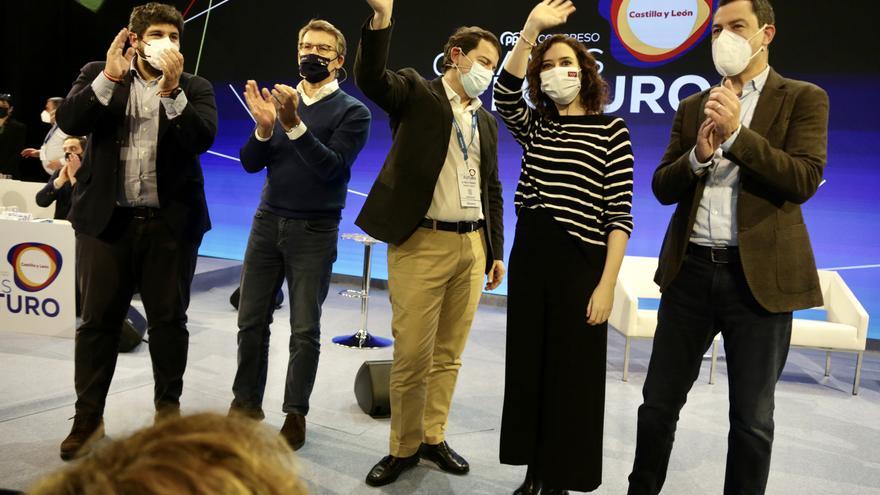 Less than a month before the elections in Castilla y León, the autonomous presidents of the PP supported Alfonso Fernandez-Manueco in the congress that crowns him again as leader of the PP in his community and that served to definitively start the pre-campaign. The game is played a lot in the appointment of February 13 (even Teodoro García Egea, Pablo Casado’s number two recognized it in the conclave) and all the barons turned to a unit that had not been produced for months.

The objective is none other than rowing to achieve a victory similar to that of Madrid in Castilla y León. Isabel Díaz Ayuso, who arrived at the congress along with the rest of the presidents and who continues to arouse special interest among the members, joined the words of her counterparts in acknowledging that the elections in this autonomy “go far beyond” their borders. “Spain needs Castilla y León to demonstrate that Sánchez’s project is finished and that May 4 was not an anecdote.

Right after, he asked Mañueco to demonstrate that “Sánchez’s nightmare has an expiration date” and assured that the party will make it clear “that 2022 is going to be a horrible year for all those who go against Spain, for the alleged moral superiority of the left that tells us that we have to impoverish ourselves, that it goes against the family, the self-employed and the businessmen”.

His words were read among the main leaders in drive key, in a more generous speech than in past congresses (sharing the success of the May polls and expressly citing Pablo Casado so that he arrives at Moncloa as soon as possible) and which caused less stir than in congresses such as the one in Castilla La-Mancha or Andalusia, when tension levels with Genoa were at maximum.

He did leave a message to the national leadership when he insisted that the internal congresses “are very good” because they serve “to unite the party and give support to the presidents”, showing between the lines (once again) that she also wants her congress as soon as possible and who aspires to lead the PP in Madrid. For the Madrid conclave there is still no clear date on the calendar and that is something that continues to bother Sol. But the electoral urgency and the need to obtain good results in this community forced a truce (controlled and that will last only a few weeks) to row all at the same time. After that, it will probably resume.

On the results and the need for the Castilian-Leonese elections to go well, the president of Andalusia, Juanma Moreno, also spoke, who did not give any clue as to when they will be held in his community. Before or after summer. “These elections are also very important for me, as I am the next to take the exam. By God, get a good result!”, Moreno snapped, arousing applause from the ranks and highlighting, at the same time, the consequences that 13-F will have in one way or another.

Sources from Genoa recognize that the Andalusian president is right. A solid majority of Mañueco would boost the path of his community and increase the chances that the elections will be held before the summer. Other leaders acknowledge that if Vox get a consistent resultFor Andalusia the situation would be complicated. In any case, leaders of the leadership maintain that the internal surveys (and more after the meat controversy generated by Minister Alberto Garzón) continue to place them in the vicinity of the 39 attorneys, bordering on the absolute majority (41).

It is true that other leaders in the region are more conservative in their prediction and point to 35 seats. Everyone agrees that there will be a clear victory, but the number of representatives will determine the autonomy of the PP. Ayuso’s success was precisely to add more than the three leftists together, forcing Vox to support his investiture without being able to demand to enter the government. Mañueco wants exactly that model. And Casado is the first interested in all his regional presidents obtaining similar victories. as posted THE NEWSPAPER OF SPAIN, a newspaper that belongs to this group, Prensa Ibérica, the leader of the PP trusts his arrival in Moncloa to a cycle of change that began on 4-M and that now must continue to win all the elections that are presented.

The most authoritative voice in this regard was that of Alberto Núñez Feijóo. The president of the Xunta accumulates four consecutive absolute victories, as he himself recalled in his turn to speak in León, although he also pointed to Ayuso as a revitalizing element of the party: “Yours was the ‘match ball’ for the PP”, he told him. The first to intervene was Fernando Lopez Miras, president of Murcia, who justified the electoral advance in Castilla y León almost as his own. The motion of censure in his region was the beginning of everything. “In this land a carbon copy of what happened in Murcia was being repeated. Don’t be fooled. The approval of the Budgets was delayed, Citizens demanded measures that were not agreed upon, they had meetings with the PSOE… Does that sound familiar to you?” said the Murcian president. “I have lived it. Don’t be fooled”.

The national leadership acknowledged total satisfaction this Saturday night for seeing the congress script fulfilled. The starting image of the week (Teodoro García Egea and Isabel Díaz Ayuso together) was not accidental. It was the beginning of the political year and a declaration of intent for the elections in Castilla y León. The verification that all the barons, including the Madrid leader who maintains her pulse with Genoa, are willing to park the internal cracks to reissue a large regional majority.

This Sunday Casado closes the conclave at a sweeter moment than the previous ones, thanks to the unity that all the barons confirmed. Of course, with the constant fear that Vox could surprise. Santiago Abascal also managed to fill his rally in Valladolid on Saturday morning challenging the popular. Early elections are a test of the same dimension for manueco and the leader of the PP, who could not bear any defeat at this point.