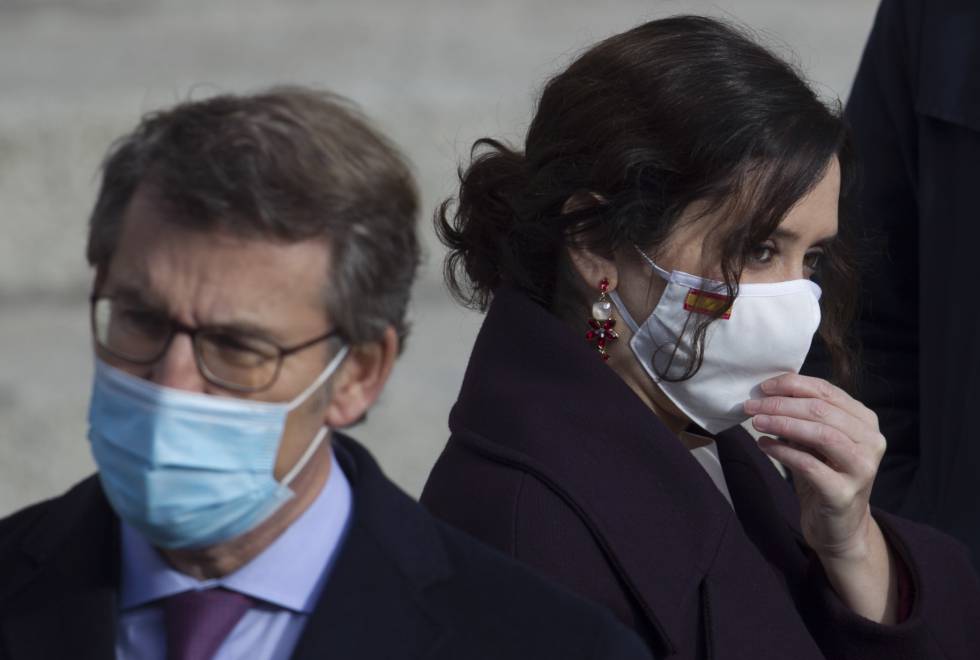 The barons of the PP that govern in Galicia, Castilla y León, Murcia and Andalusia do not support either with their decisions or with their words Isabel Díaz Ayuso’s commitment to keep shops and hotels open during the pandemic. After seeing how the president of the Community of Madrid ordered these businesses to close at 9:00 p.m., letting them work the rest of the day, and having up to four people per table, Alberto Núñez Feijóo expressed his surprise on Sunday in an interview in The voice of Galicia: “Madrid has opted for a decision for which I would not feel responsible if I had to apply it in Galicia and, therefore, I have opted for another”. The rest of the barons do not need to verbalize it, as a source from the Government of Castilla y León emphasizes, it is enough to go to the facts: Andalusia, Castilla y León, Galicia and Murcia have adopted tougher measures than those of Madrid.

“The Madrid thing draws a little attention. We would like to have the hotel industry open! ”, Says a source from the Government of Castilla y León. “Madrid risks a little because it plays with an advantage: in what would be a province it concentrates six million inhabitants and many hospitals, which gives it flexibility.” And he continues: “We, in the second wave, closed the large stores, the gaming sector, and the hospitality industry, which we gave help to keep the terraces in operation. It worked very well for us. They are effective measures. We have lowered the accumulated incidence to forced marches ”.

Thus, Castilla y León, where Alfonso Fernández-Mañueco governs, has just ordered the closure of the hotel business in Palencia and 52 other municipalities. In Galicia, the hotel business is completely closed throughout the region, non-essential commerce closes at 6:00 p.m. and shopping centers are not open on weekends. In Andalusia, where Juan Manuel Moreno Bonilla governs, non-essential shops and the hotel industry close their doors at 6:00 p.m., except in those municipalities that register an accumulated incidence in the previous 14 days of more than 1,000 cases, where closures are total.

And in Murcia, finally, the activity of the hotel industry is limited to local collection and home services. “We cannot normalize death. It hurts us, but without life there is no possible economy ”, said in November the president of the region, Fernando López Miras. Now, sources from the regional Executive defend that the closures are “a difficult measure, but necessary and, most importantly, effective”, although they express their “absolute respect for the formula adopted by the experts and technicians of the Community of Madrid”.

The region governed by Díaz Ayuso has chosen to impose the least possible limitations, which has also caused criticism in the PSOE: “Others in Spain are presuming to be less restrictive, so that when the barrier opens we all turn to complicate life ”, said this Monday the president of Castilla-La Mancha, Emiliano García-Page.

For months, the government of Díaz Ayuso wanted to make the region an oasis of activity in the desert of the closures of Spain. With hardly any restrictions after the first state of alarm, hoteliers and merchants worked relatively normally until last Monday, when their opening hours were limited (until 9:00 p.m.) and capacity was further reduced (from six to four people).

Now, the confessed obsession of the regional Executive is not to extend those restrictions on February 8, if the health situation allows it. That is the message that Díaz Ayuso and his vice president, Ignacio Aguado, have conveyed to hoteliers and merchants this Monday in two separate meetings. The team of the president of the Community of Madrid has designed a protocol of good practices for the premises with which it hopes to accelerate the reopening to full capacity. And meanwhile, he argues that the closure of the hospitality industry only serves to ruin businesses and increase unemployment, because the regions that have opted for the restrictions have not managed to control the spread of the virus.

This is what the data says. On Friday, the last day on which the Ministry of Health has given data disaggregated by communities, Madrid had a cumulative incidence in the last 14 days of 993.02 diagnosed cases per 100,000 inhabitants. Murcia (1,285.50) and Castilla y León (1,402.89) were worse off. On the contrary, Galicia (768.18) and Andalusia (899.07) improved the Madrid data. The contrast between the different ways of facing the pandemic of the PP barons has put the national leader of the conservative formation, Pablo Casado, in a bind this Monday.

“How would you manage the pandemic?” How Feijóo, or like Díaz Ayuso? They have asked him during an interview on the SER network.

“They are doing it exactly the same, the criteria are those of the World Health Organization,” Casado replied.

“Who is more responsible?” Feijóo or Díaz Ayuso?

“They are all responsible.

The mayor of Madrid and national spokesman for the PP, José Luis Martínez-Almeida, who has tried to swim and put away clothes, has expressed himself in the same line, reports Luis de Vega. On the one hand, he said, he understands that the words of Núñez Feijoó “are appropriate to the fact that he is president of Galicia and the scenario that Galicia has, which is different from the one in Madrid.” At the same time, Martínez Almeida has recognized that he would not like to be in the shoes of an autonomous president who has to face the pandemic “alone”. As for supporting Ayuso’s measures to release as soon as possible the restrictions on the hospitality sector, the councilor of the capital has affirmed that it coincides “word for word”, because the sector has to “recover as soon as possible the lost ground” . “Forgetting the economy is a mistake, but prioritizing the pandemic is inexcusable,” added Almeida.

All regional managers remember that each community is a world, with its idiosyncrasies, its particular problems, and its customized solutions. For this reason, every time that Casado puts Madrid as an example of management in the face of a virus that has already caused more than 20,000 deaths in the region, there are PP leaders who are surprised: among the models of Díaz Ayuso and Feijóo, for For example, it mediates a significant distance. And not only in the fight against the virus.