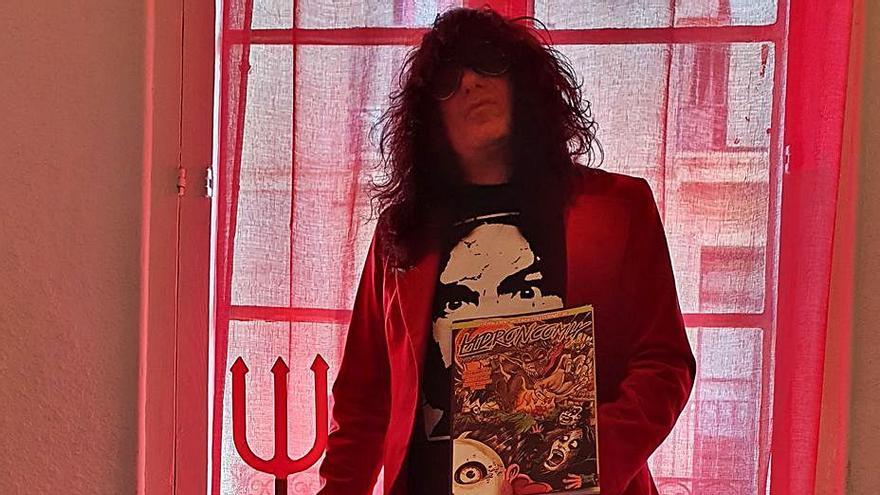 Born in San Vicente del Raspeig, Joaquín Ladrón is one of the exponents of the tremendous line of Subterfuge Comix (transgressive stories of ugly aesthetics) and a reference to the comic underground and independent of the country. He has published his comics for decades in Ruta 66 magazine, has designed numerous album covers and music band posters and is the author of comics such as The muco-gang O The candy man.

Drawing of the new comic about werewolves from Alicante.

“Now I am working on a comic for this publisher in the United States and they told me they wanted to publish a selection of my comics. I did not know what to select and I sent them everything so that they could choose and they have put everything in, “says Thief with a laugh.

The author explains that this anthology contains well-known comics published in the Subterfuge, El Batracio Amarillo or Herte’zine fanzines, such as Gusarapo or The New Poor, which speak of problems that never cease to exist, such as unemployment or the crisis – «it’s like If he had drawn it the day before yesterday because we are just as screwed up as thirty years ago, “he clarifies,” and they maintain “the rebellious and nonconformist spirit” that his comics exude.

But in this compendium there are also unpublished stories such as El Tabardillo, a comic half made with the Alicante cartoonist and animation director, Paco Sáez (San Miguel de Salinas, 1970), awarded the Goya for the best animated short in 2020 with Madrid2021 and responsible for supervising the storyboard of films such as Catch the flag or Tadeo Jones2, with whom he shared a class at the Orihuela School of Art. “It has been a great satisfaction working with him. The script is his, based on a character from his town, and the drawings have been made by me, with my style ”, he points out.

Covers of the Thief anthologies for the US and Spain.

Thief’s American adventure does not end there, as he is now finalizing the lycanthrope comic for Sparkle Comics, which he still has no title for and which he plans to finish in a month. I can only say that it is a werewolf story in which there is criticism. I am doing everything in pencil and I will deliver it in black and white ”, the author advances on this piece“ of classic horror with an underground touch ”.

“My editor, Marc Gras, tells me that I am a classic draftsman because I do everything with a pen, I go from the computer to the highest degree because the effect you see is not the same as if you do it by hand,” explains this pencil worker proudly. about whose figure and work linked to music the directors Xes Vilà and Manolito Motosierra are preparing a documentary.

Covers of the Thief anthologies for the US and Spain.

In the movie, it will be titled Ladroncomix. Ink and high voltage of Rock N Roll, Ladrón is the common thread between comics, the music press and rock, in which 38 people from the world of music and comics participate.

The sanvicentero, who paid homage to rock myths with his own cartoons and musicians’ texts in the Songbook and Songbook 2 books, is now the protagonist of the story and is spoken of by musicians such as Fernando Alfaro, Silvia Superstar, from Killer Barbies; Sergio Martos, from Schizophrenic Spacers; Carlos Galán, from Subterfuge Records; the cartoonists Miguel Gallardo and Miguel Ángel Martín or music journalists like Jesús Ordovás, from Radio 3.

The work will also take to Los Angeles with the production company Redbarre Media.