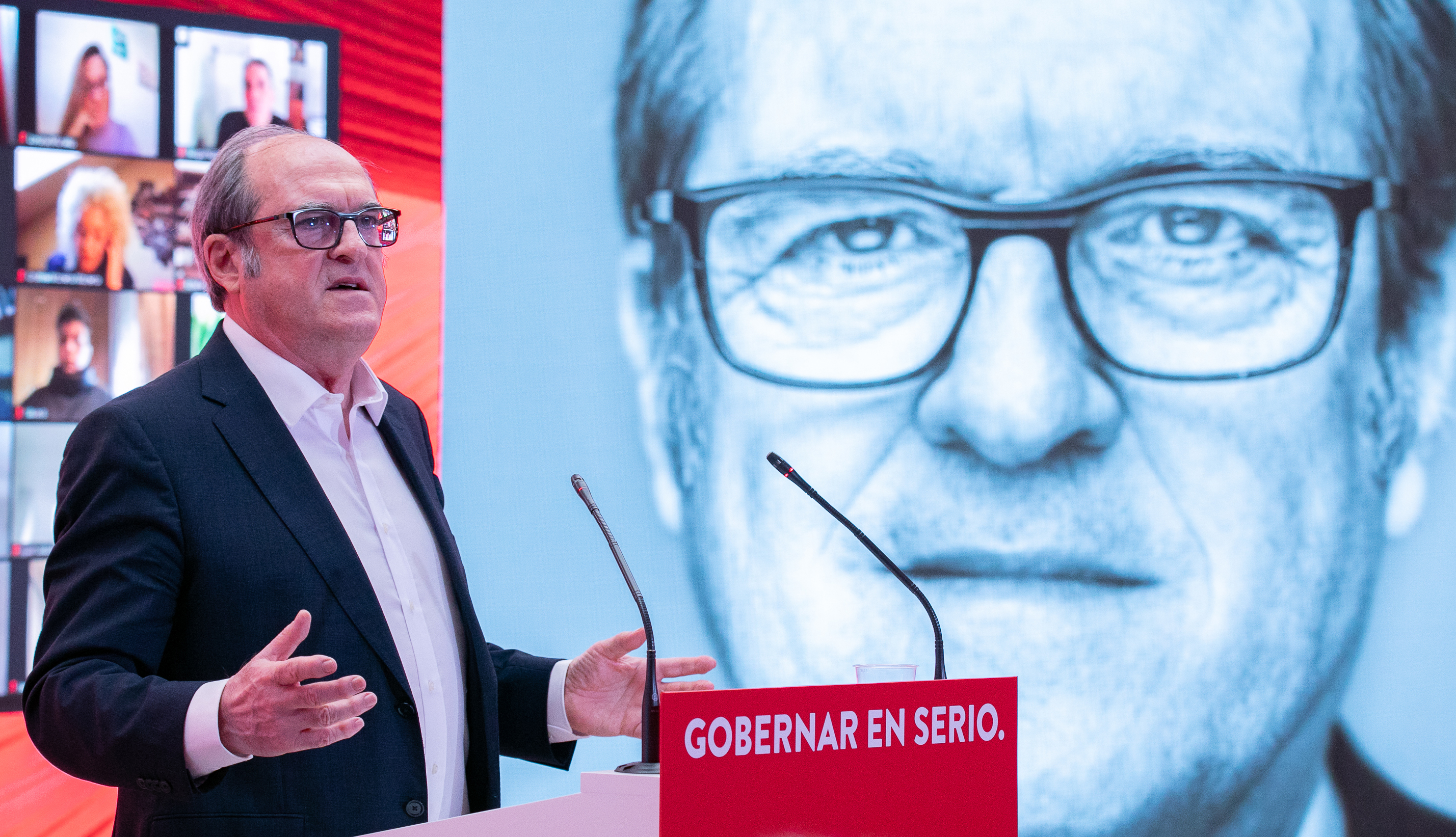 The campaign in Madrid is going to be long, because three weeks before it starts, almost all the positions are already fixed. The PSOE is looking for the center to prevent the 26 seats that Citizens can lose from all going to the PP, which would give a landslide victory to Isabel Díaz Ayuso. So much so that his candidate, Ángel Gabilondo, even went so far as to say this Monday that he would not govern Madrid with “this Pablo Iglesias”, in relation to the vice president’s harsh speech these days. The coalition that governs Spain does not seem in danger, but the partners will distance themselves as much as possible these weeks.

All the paths of the PSOE campaign lead to two numbers: 26, the seats that Ciudadanos now have and may lose; and 5, the percentage that Edmundo Bal, the candidate of Inés Arrimadas, must exceed to enter the Madrid Assembly on May 4. If Cs does not pass the cut, something that was taken for granted with Ignacio Aguado, the previous candidate, and it remains to be seen with the novelty of Bal, the chances that the PP will achieve an overwhelming victory that allows him to govern with Vox or even in solitary increase exponentially.

This reality, which they have very clear at the heart of Gabilondo’s campaign, according to socialist sources, is what conditions his candidate’s entire speech. In fact, even the decision to repeat with Gabilondo and not look for a riskier option also has to do with this factor. In the environment of Pedro Sánchez they believe that the former Minister of Education is an ideal figure to look for part of orphaned voters of Ciudadanos who do not want to support the PP, and less in the version of Isabel Díaz Ayuso.

Faced with this need to attract Cs voters or, failing that, to make this party overcome the 5% barrier, the PSOE faces the problem that this sector rejects Pablo Iglesias, who has just joined as a great star of the campaign . Faced with the risk that they will go to the PP so as not to support an option that may end up incorporating Iglesias into the Madrid Government, Gabilondo was blunt in an interview on La Sexta this Monday with a speech that contradicts the coalition of the Government of Spain .

The PSOE candidate assured that if after 4-M he had a sufficient majority to agree to a government, “he would do it with Citizens and with More Madrid”, but not with Iglesias. “Not with Iglesias,” he said to clarify later “with this Iglesias, no.” Gabilondo devoted a good part of the interview to criticizing both Iglesias and Díaz Ayuso for proposing a confrontation campaign with dilemmas such as “communism or freedom” or “the battle against fascism.” “It’s not about this, it’s not about this,” he insisted.

Requested by the evidence that “this Iglesias” whom he rejects is still vice president of the Government and is in coalition with the PSOE in La Moncloa, Gabilondo clarified that he trusts that these tones of Iglesias will change. And he pointed out that the people of Madrid have to vote first and then, depending on the results, a reading will be made of what the citizens have said and which government they are asking for.

The PSOE discovered its electoral tactic on Monday and launched itself for the center vote that Citizens in the Community of Madrid will lose, according to all the polls. The socialist candidate publishes a platform in this newspaper where he points out that if the polls allow it, he will govern “with More Madrid and with Citizens” because it is the formula with which he feels “most comfortable.” To seek the center vote, Gabilondo plants the party with which the PSOE governs Spain and also promises to “not touch taxation”, which means that it will not raise or lower taxes if it reaches the Government.

The campaign in Madrid, although it is still far from starting – formally it will do so on April 14 – is so unleashed that it seems clear that the PSOE-United We Can coalition will suffer the consequences in the coming weeks. The most sensitive issues that the Government discussed before the electoral call, especially the housing law, seem impossible to agree on in the campaign, so it is likely that they will be left for later. And there are new tensions, such as the prohibition of prostitution proposed by Vice President Carmen Calvo, which open new wounds.

It has already happened with the Catalan elections. The coalition suffered a lot of tension and everything was left for after the elections, in the confidence that there would be no more appointments for almost two years. But a month later there are already others summoned and everything, also the possible pact with the PP to renew the constitutional bodies, is left for after the elections. Politics is thus experiencing a new period of blockade, although government sources from both the PSOE and United We can insist that no one is considering a rupture of the coalition or an electoral advance in 2021, when the Budgets and the recovery fund are about to be executed. European Union and the pandemic and the economic crisis have yet to be resolved.

Movements like Gabilondo’s have to do, according to socialist sources, with the electoral campaign and the need to place the PSOE in a more focused position. But if after 4-M there was a possible sum that included Iglesias, there would be no problems in exploring it as it happened to achieve Sánchez’s investiture in 2020.

The moderation that Gabilondo preaches collides with Iglesias’ speech, which began with assertions about “criminal policy” on the right and forecasts that if investigated, the president of the community, Isabel Díaz Ayuso, will end up “in prison.” These are the examples that the Gabilondo environment puts to distance him completely from Iglesias. “It should be known that we cannot be with that confrontational policy, nor with the one that President Díaz Ayuso is leading,” they point out in the Gabilondo environment. Perhaps it has been too early for Ferraz that pronouncement on pacts, as it was observed this Monday in the attitude of the secretary of organization of the PSOE, José Luis Ábalos, who placed those phrases in the “autonomy of the candidate”.

The Madrid candidate settles in Ferraz

From the center to the left, right where the safe voters of United We Can begin. This wide fishing ground is where the socialist candidate, Ángel Gabilondo, is going to turn to the community of Madrid. Therefore, his adversary on the left is Mónica García, from Más Madrid, and Pablo Iglesias from Unidas Podemos. Nothing extraordinary and anomalous if it were not for the fact that Iglesias, second vice president of the Spanish government, is in coalition with the PSOE and, even if he leaves his post, he will continue to be the leader of the party that co-governs Spain.

The spaces will be differentiated and, while defending “the solidity” of the nation’s government, Moncloa will bet on the vote for Gabilondo, the “useful” left, to differentiate it from United We Can. So that there is no doubt about the commitment to the candidacy of the Professor of Philosophy, this will be installed from today in the federal headquarters of the PSOE, on Ferraz Street. In addition to all the technical assistance, Gabilondo wants to delimit the work of the Assembly from that of the candidate.

If there was a surprise yesterday in Ferraz due to the forcefulness with which Gabilondo excluded Pablo Iglesias from a government pact, in statements in La Sexta. Perhaps he was aware that he must introduce some nuance in linking the person to his current political position as a candidate. “With this Pablo Iglesias, no.” In the environment of the candidate they emphasize this precision that Gabilondo himself has already made. “It is not a refusal to him, it is a refusal to confront him,” added the candidate himself. In their environment, however, they recognize that in all this time the political relationship with the United We can group has been satisfactory and they have reached quite a few agreements, at all stages, and, now, with their last spokesperson, Isa Serra.

The moderation that Gabilondo preaches collides head-on with Iglesias’ speech, yet to be developed, which began with assertions about the “criminal policy” of the right and forecasts that if it is investigated, the president of the community, Isabel Díaz Ayuso, will end ” in prison ”. These are the examples that the Gabilondo environment puts to distance him completely from Iglesias. “It should be known that we cannot be with that confrontational policy, nor with the one that President Díaz Ayuso is leading,” they point out in the Gabilondo environment. Perhaps it has been too early for Ferraz that pronouncement on pacts, as observed yesterday in the attitude of the secretary of organization, José Luis Ábalos, who placed those phrases in the “autonomy of the candidate.” Now that Gabilondo is settling in Ferraz, there will be few surprises, always respecting the uniqueness and style of the professor, they acknowledge in the federal leadership.

Yesterday the candidate took many steps. No to Iglesias and closeness to Mónica García from Más País and Edmundo Bal from Ciudadanos, because they are not in a position of total war against the adversary. Gabilondo, however, cannot expect complicity from either of the two, since he is aware that the socialist candidate is also going after his electorate. On the part of Ciudadanos, you can expect a permanent reminder that socialists change their mind when they see the possibility of government. The coalition in the government of Spain is the proof.