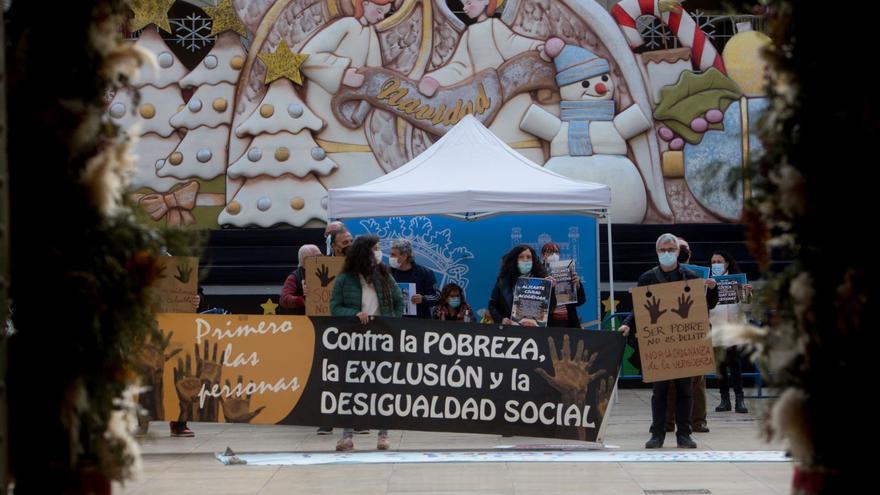 While the Valencian Courts approved the Budget of the Generalitat for 2022, the Municipal Plenary of Alicante gave the green light to commemorate December 4 as the Day of the Reconquest of Alicante. The initiative presented by Vox, which defended “not to forget the most important chapters of history”, such as “the day the Crown of Castile takes the city from Muslim rule”, had the support of the two partners of the bipartisan, PP and Citizens. That union in the last ordinary plenary session of the year, that of December, one week ahead of the calendar due to the Christmas holidays, was a constant throughout the plenary session.

In fact, in nine of the ten institutional declarations that were addressed, there was an alliance between the government of Barcala and the ultra formation, which also allowed the approval of two proposals contrary to the linguistic policies of the Consell (“imposition” of the Valencian and ” indoctrination ”in the classrooms, according to the bench on the right) and an initiative against the changes promoted by the Sánchez Government in the Gag Law, officially known as the Citizen Security Law. This common front served to reject the proposals of the left, which sought to recover the Department of Animal Protection and create the Department of the Elderly, in addition to removing the catafalque of the Falangist leader José Antonio Primo de Rivera from the Alicante cemetery and the tombstone with the shield of the yoke and the arrows and to promote a commission of advice, consultation and proposal in matters of toponyms of Alicante. Such was the “roller” of the right-wing bloc in the last plenary session of the year 2021, that only an institutional declaration of the left came forward. Specifically, an initiative of the Socialists for the City Council to carry out a study to determine an economic line of municipal aid to cognitive diversity associations to carry out respite activities in hotels in Alicante. That proposition divided the right, but not the bipartisan, with Vox backing the declaration of the socialists, as well as United We Can and Compromís.

This reinforced proximity between the three groups on the right wing is produced in the middle of the negotiation of the municipal budget for 2022 and awaiting the final approval of the ordinance against begging and prostitution, officially known as the Ordinance of Civic Coexistence, which He was once again the protagonist of the Plenary of Alicante. In this case, due to the protest organized by social entities, which took place in the Plaza del Ayuntamiento during the plenary session. With slogans such as “against poverty, exclusion and social inequality”, “being poor is not a crime” or “outside the ordinance of shame”, socialist groups showed their rejection of a text that is in the phase of allegations, to the waiting for planned change proposals such as those of Ciudadanos, which seek to “soften” a document that currently does not include social interventions and that raises fines to 3,000 euros. The ordinance was also discussed during the plenary session, although less than Compromís would have liked. The Valencian coalition raised an “in voce” question about what led the Barcala executive to promote a document so criticized by third sector entities. However, Barcala cut the matter off at the root, taking the floor to reply to Compromís’ spokesperson, Natxo Bellido: «After the initial approval, asking about the file seems reckless to me. He just wants to make a value judgment. The mayor, on the other hand, shunned the debate when Bellido reproached him on several occasions for reaching the end of the year without approving the Budget. The criticism was not accidental. This Wednesday, while the Plenary of Alicante addressed issues such as the linguistic policies of the Consell, the Gag Law or the celebrations for the “reconquest” of Alicante, the Cortes approved the seventh Botànic budgets. The Community of Madrid also gave the green light to its accounts for 2022. A procedure already passed in the Alicante Provincial Council and in the municipalities, by population, closest to Alicante in the Community: València (above in the population table) and Elche (under). The Alicante capital, however, continues without making progress in the approval of the accounts, despite Barcala’s commitment to do so before the end of this year.

Such is the delay that Vox has not yet made public its demands to reach an agreement, although it has already advanced that it will ask for cuts in “ideological” items, alluding to areas such as Equality, LGTBI or Cooperation. Alicante does not have a Budget approved in a timely manner since Sonia Castedo was in charge of the government. For seven consecutive years, the City Council has given the green light to late accounts, which ends up conditioning the budget execution during the year in question. Neither with the left tripartite, nor with the PP alone nor with the bipartisan one, has it been possible to comply with the process before the end of the year. This time it will not be different either.

In the absence of a budgetary debate, the December plenary session finally approved the Municipal Ordinance of Fiestas de Alicante. And he did so without votes against, with the only abstention of United We Can for not guaranteeing zero mistreatment at parties. The text, according to the councilman Manuel Jiménez (PP), supposes to fulfill a historical demand of the sector to “regulate the celebrations and festive activities in the public thoroughfare, allowing the coexistence with the citizenship”.

This matter touched unanimity in a polarized plenary session, where there was only unity to approve the payment, through an extrajudicial credit recognition, of some pending invoices from the Post Office. On the other hand, with four abstentions, the payment of pending bills for some rehabilitation works in the castle of San Fernando went ahead, amid criticism of United We Can and Compromís for the lack of coordination of the competent councils, thus adding to the words that the Controller left black on white in a report.

Another high official, the municipal secretary, was the accidental protagonist of the plenary session by forcing to modify one of the initiatives of the bipartisan on the Valencian, despite Barcala’s reluctance. The secretary alleged, in an unusual position, that two of the three agreements in the declaration were not related to Alicante, when speaking of the “harassment campaign” against a minor from Canet (Barcelona) after the Supreme Court ruling that it obliges to teach 25% Spanish in classrooms. The session ended earlier than planned because the right wing blocked the debate on a Compromís initiative against hunting in the municipality, voting against the urgency.

Despite the bitter debate that lasted for a good part of the last ordinary plenary session of the year, in the final stretch of the session all were good wishes, given the general lack of luck of the Corporation in the Extraordinary Christmas Giveaway, which was also talked about. Of course, congratulations with a message. While some spoke of “Bon Nadal” or “Merry Christmas”, others preferred “Happy Holidays”.

While waiting for the bipartisan of Alicante to make its Budgets project for 2022 public, the mayor, Luis Barcala, announced this Wednesday that the policy items for the elderly will be increased by 50%. This was advanced during the debate of a proposal by the socialist municipal group for the creation of a specific council for the elderly in the Alicante City Council, which was rejected by the bipartisan partners (PP and Cs) and Vox. The three left groups (PSOE, United We Can and Compromís) voted in favor of the initiative. In the final stretch of a debate in which representatives of centers for the elderly participated, who criticized the management of the municipal government, Barcala defended that the “important” thing is not to create councils, but their “content.” Next, he estimated the increase in the Budget for the elderly at 50%.