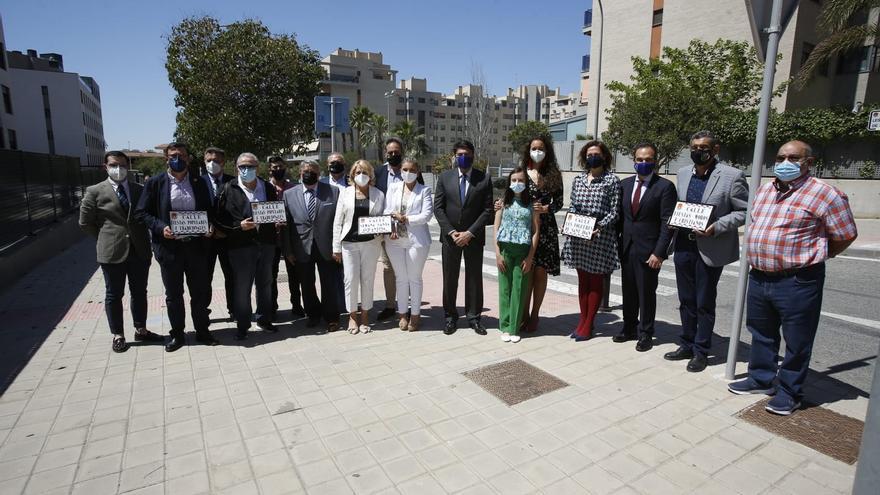 The first vial to be discovered was the one dedicated to the traditional festivals of Alicante, located on Vía Parque at the intersection with Cardenal Francisco Álvarez El festero Óscar Llopis He assured that this type of recognition is “important, because there is talk of traditional festivals and more at the moment”. “For us it is a push to continue working, there are many people and many neighborhoods behind these festivities. It is about the Tabarca, San Roque, San Antón, Raval Roig, Santa Cruz and San Gabriel festivals, where we dedicate ourselves to recovering folklore. and the history of the city “, Llopis pointed out.

The second street uncovered this Friday has been the one destined to the Moors and Christians, formerly known as Ciudad de Matanzas El festive Juan de Dios Bermúdez, from Altozano, has pointed out that “it is a recognition of the festivities, it is good that we all have streets because we are a capital where there is always a party.”

Third, within an act in which part of PAU 2 has been covered to visit the four points, the time has come for the Holy Week in Alicante, a road that until now bore the name of Toyooka City “It is a very important recognition, because we are a collective that moves a lot in the city of Alicante, both economically and faithfully. We are very grateful, we thank the City Council” , said Esmeralda Giner, advisor to the Presidency of the Greater Board.

Finally, turn for San Juan’s bonfires, which now give name to a street known as Wenzhou City. The official festivals of the city have been represented by the president of the Federation, Toñi Martín Zarco, together with the two Belleas del Foc. “It is very good news. Until now we had streets of foguerers, Bellesa del Foc … It is a success, and above all that we have all the festivals in the city,” Martín-Zarco pointed out.

For its part, at the end of the tour through the new streets of PAU 2, the Mayor Barcala He stressed that today was the day to “pay off a debt with the Alicante festivities”. “The city incorporates its parties into the street. It is a reason for satisfaction and more so in this neighborhood of PAU 2, so full of life and youth. It is very representative that the parties are in this part of the city,” said Barcala, who has taken the opportunity to thank the Alicante festivals that, in these moments so complicated by the pandemic, “are still at the foot of the cannon, reinventing themselves”. The Vice Mayor Sánchez It has also valued the work carried out by the festivals in the city: “They not only enrich our city, but are also a focus of tourist attraction. Today is a holiday for Alicante.”

The announcement of the act has generated unease among the municipal opposition, since the City Council has not invited any opposition group, as always happens in this type of events linked to the inauguration of new streets in the city. The Commitment spokesman, Natxo Bellido, has regretted the attitude of the bipartisan of Alicante, underlining that it is not an anecdotal fact because it has been repeated in recent months on other occasions. Subsequently, the socialist Manuel Marín he has assured that “as the attitude of the mayor is becoming habitual, he once again despises the other municipal groups representing the citizens in various acts”. “The components of all the festivals of the city must know that the absence of the Municipal Socialist Group is not due to a lack of interest, but rather to the fact that the government group intends to monopolize something that belongs to all the people of Alicante regardless of political color. The PSOE represents an important part of the citizenship “, has indicated the socialist. Sources from the Mayor’s Office have assured that it has been a “mistake in the convocation”, ruling out that it was a premeditated act.

Also Read  "Pump-and-dump": the strategy with which influencers deceive small investors in the stock market

We cannot understand from the municipal group @CompromisALC that we have not been invited to the inauguration of the streets destined to parties of the city of Alicante. And lately, that’s been happening all too often @alicanteayto. It is another example of Barcala’s lack of institutional character

Future of the Bonfires this 2021

About him future of bonfires Throughout this 2021, which will be addressed in the Assembly of the Federation to be held this Sunday, Barcala has indicated that the decision must correspond to the festeros: “The City Council has to listen to the parties. This year, depending on the health situation, there are events that are being programmed, such as the Election of the Bellea del Foc. We want the festivities to pronounce on the viability of the Bonfires this 2021. It is intended that there will be some Bonfires to fully enjoy or most of the commissions transfer us prefer that they be postponed “.

Also Read  The 30th Mitja Marató de Santa Pola will have about 7,000 participants