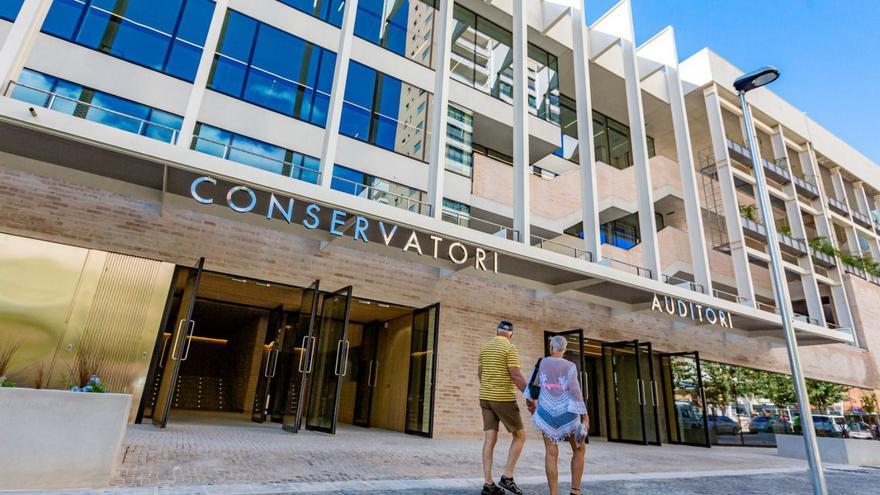 Problem about problem in the works of the Benidorm Cultural Center. The Society for Thematic Projects of the Valencian Community (SPTCV), the public company in charge of executing the major infrastructures of the Generalitat, has again had to postpone the completion of the first phase of this property, whose physical work has been completely completed since the end of September, this time due to the breakdown of a transformation center of the electric company Iberdrola and from which the building’s lighting is now supplied. This has been confirmed by sources of the entity, who have indicated that last week, after receiving and installing the necessary microchips to make the connection to the electrical network that forced to postpone it a month ago, this new failure was detected when it was going to proceed to the installation, which prevented it from being carried out as planned. The same sources have trusted, however, that the electricity company can have the problem solved as of next week and, in this way, it can proceed to the “cut” of energy from this transformer to carry out, in a once and for all, the definitive installation.

This step, however, will not be the last, but the first in a series of actions necessary to definitively finish the work. In fact, the Thematic Projects forecast indicates that pending work could take at least one more month, since once the building has the light coming from its own transformation center, installed on the corner facing Avenida de Europa, it will be necessary to initiate a series of tests and certifications in all the luminaires and other electrical appliances, from the air conditioners to the elevators, with technicians from different companies who will have to travel from various points in Spain, before being able to deliver the work to the City Council. And this, in turn, must also do a technical review of the entire infrastructure before receiving the property, as indicated by the council, “to verify that everything is correct.”

Also Read  The 8 foods you should never freeze

This first phase of the Cultural Center, in which 12.7 million have been invested, plus the nearly 24 that had already been spent on the structure, will contain a smaller room with a capacity for 450 seats – less than the 560 initially planned -, Municipal Conservatories of Music and Dance and a cafeteria to serve both spaces, all with access from Calle Jaén, from where it can already be seen that the work itself of the building is completely finished in the absence of installing the final supply.

This new delay is one of those that the infrastructure has suffered since the pandemic began. Stoppages due to quarantines or the contagion of covid-19 of some of its workers, lack of supply of construction materials and other problems derived from the crisis generated by the coronavirus have been some of the causes that have caused these delays, which even forced to the general director of the SPTCV, Antonio Rodes, to appear publicly at the beginning of October to give an account of the situation generated. Then, Rodes explained that the SPTCV was “powerless” in the face of the global stock shortage that was taking place for the supply of microchips and stated that they would probably be at the end of October, as it has finally been.

Meanwhile, the Benidorm City Council continues to make its way to provide this building with all the services that will be necessary once it becomes operational. As this newspaper said, last August the City Council put out to tender for 400,000 euros the acquisition of instruments and furniture for the Music and Dance conservatories, in order to have all the necessary materials once the SPTCV finished the work. In addition, last week the local government board also approved putting out to tender the cleaning and maintenance of the property, a contract that will be awarded by open tender and a period of two years, extendable to another three, for an amount of 413,320.87 euros yearly. All this, without even knowing when the building will be available. Sources of the municipal executive, of the PP, explain that “we are advancing all the procedures to be able to enter and start working from the day after they deliver the work to us.”

Second phase The Consell says it will start in 2023

With the work of the first phase almost completed, at the expense of the electrical installation, the question that arises now in Benidorm is when the Generalitat will completely finish the building. Although initially no deadlines were given when the Consistory and Consell reached an agreement to resume the work after ten years of paralysis, the forecast is that the second phase could be resumed in 2023. Thus, at least, the general director said last month from the SPTCV, Antonio Rodes, who assured that in two years there will be a budget to finish the bulk of the project.