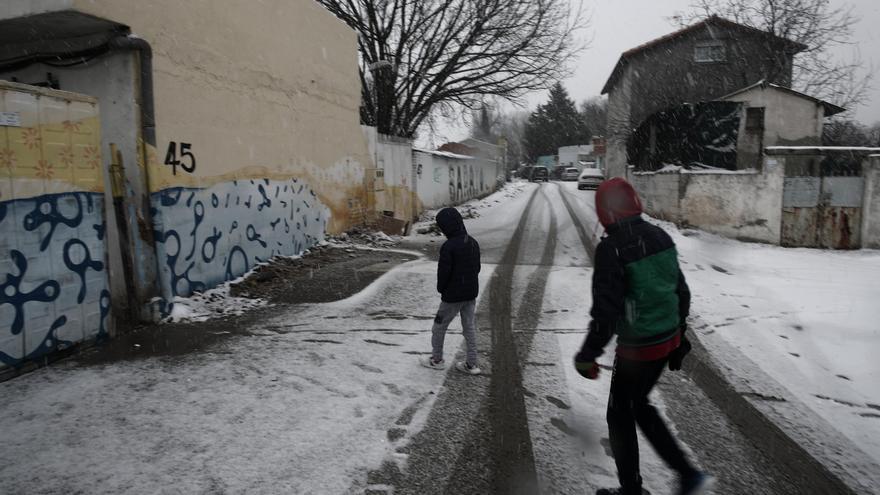 The Sector V of the Cañada Real, located in Rivas Vaciamadrid, has once again run out of electricity in full cold wave When the maximum power allowed by UFD, the Naturgy group distribution company, is exceeded, a monotorized use through automatic reclosers installed both in this sector and in the VI to detect overvoltages.

The residents of this sector, who managed organize to have light controlling consumption a lot, they feared running out of supply when everyone connected the stoves and radiators in the face of the cold wave, something that occurred this Wednesday. “We know that reclosers have much more capacity than they demand. Winter is coming and consumption increases by 50% and the line falls apart,” denounced the president of the Neighborhood Association of sector V, Ángel García Sánchez.

This neighbor complains that the installation of these automatic reclosers is “trying to monitor consumption” when this sector of the Cañada does not give the plantation problem marijuana. “We wonder if these devices that cause the supply to be cut are necessary by regulation and why they are only installed in sectors V and VI,” he criticized.

For their part, Naturgy sources have explained to EP that “at no time” have they cut or limited the power in sector V of La Cañada, but what happens is that “network protections jump due to oversized consumption “. In addition, they have recalled that they have “not a legal client” In this sector.

Sector VI continues for now no power supply and faces a new winter. Meanwhile, the judicial battle continues in the courts and the relocations are taking place slowly. On October 27, residents of sector VI submitted a request for contracts to UFD. In its response, the company states that UFD is “in a position to attend to all requests for connection to its distribution network that are accompanied by the documentation required by law.”

In this sense, the company assures that it is “fully involved in collaborate in solving the problem, always within its limited powers and in strict compliance with current legislation “.

In the judicial sphere, the judge investigating the electricity supply cuts appointed an independent judicial expert at the end of the summer to prepare a report that would contrast the version provided by the Naturgy electricity company.

The criminal process faces more than 4,000 affected by the lack of electricity supply against Naturgy and the Community of Madrid. The regional government links the cuts to the conflict related to marijuana crops. In sector V, the service was restored in January after the disconnection of several points suspected of hosting marijuana plantations.

From Cáritas Madrid they ask the City Council of the capital and the Community of Madrid that, in addition to thinking about the relocation of families, in the meantime, take “emergency measures”Such as providing them with butane catalysts, firewood, small generators, putting shuttles to Rivas Vaciamadrid so they can go to laundries or subsidizing their laundry. The director of the diocesan Cáritas of Madrid, Luis Hernández Vozmediano, estimates that with about 500,000 euros these needs could be alleviated immediate neighbors of the Cañada Real. In addition, they estimate that placing solar panels could amount to 6 million euros.

And although until now it has been the NGOs that have provided the firewood or the stoves, they ask the local and regional administrations to assume their responsibility.

The Regional Pact for the Cañada Real Galiana signed in 2017, the result of the agreement of all the political forces present at the Madrid Assembly, sets a roadmap for the solution of this shanty town -with measures such as relocations or renaturalisations- and in it are present both the Government Delegation and the Community and the affected municipalities -Madrid, Coslada and Rivas-.

The government delegate in Madrid, Mercedes González, proposed in October, in a meeting held with the regional president, Isabel Díaz Ayuso, to relocate all the families of La Cañada within three years, through a budget of 200 million euros between all administrations.

In addition, the Secretary of State for Agenda 2030, Enrique Santiago, announced during his appearance in the Congress of Deputies that they will allocate 5 million euros to alleviate the situation in La Cañada Real, with which they demonstrate, according to said, “the political will” of the Government to give a solution to this situation. Thus, the Council of Ministers will approve on the 30th of this month via Royal Decree the provision of 5 million euros for relocations in the Cañada Real Galiana.

It was on September 28 when an interministerial working group was formed, promoted by the Ministry of Social Rights and the 2030 Agenda to provide comprehensive solutions to the population of La Cañada Real. The team, made up of the ministries of Social Rights, Transport, Mobility and Urban Agenda, and the High Commissioner for Child Poverty, is coordinated by the Government Delegation in Madrid.

The Minister of Environment, Housing and Agriculture of the Community of Madrid, Paloma Martín, celebrated and welcomed “willingly” that the Government of Spain is involved in the relocation of inhabitants of the Cañada Real Galiana. The deputy mayor of Madrid, Begoña Villacís, asked this Wednesday to return to the “spirit” of the Pact for the Cañada Real because it made a “great advance” on a “complex” issue thanks to the participation of all political groups and social entities . The City Council and the regional government have carried out a total of 135 relocations.