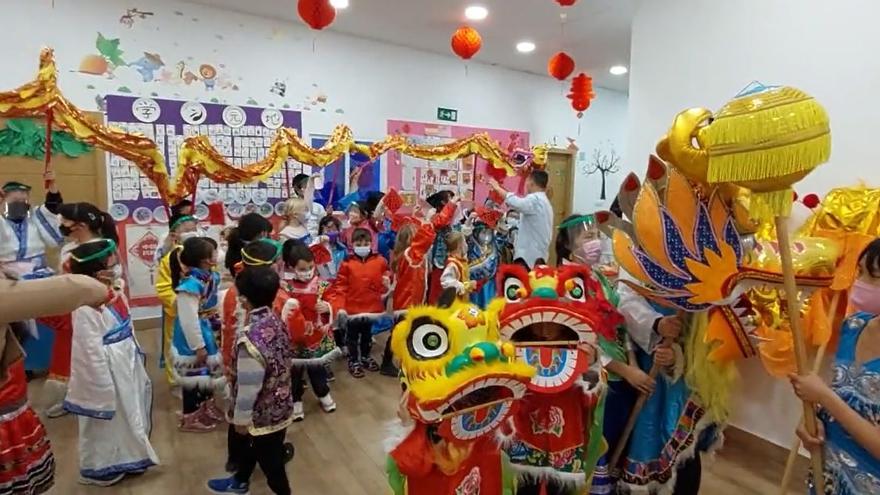 After having a “very bad time”, as Xiao Min, owner of a restaurant in Alicante, points out, the Chinese community in the province faces the future with optimism after resisting a crisis, both health and economic, which caused temporary business closures long before that the Alicante businessmen closed the blind forced by the pandemic. Chinese restaurants and bazaars suffered a drop of up to 60% in turnover. Many have already recovered half despite the successive waves of the virus, although some businesses went bankrupt, with an exodus to China of families who were based in the province and who chose to return to their country of origin. The Chinese colony points out that many will not return, especially those with small children; but they trust in the return of some 1,500 citizens, around half of those who left. They begin to open new bazaars and restaurants, green shoots that they trust to consolidate from the summer with the return of tourism because they believe that the control of the pandemic is getting closer.

Toast to the New Year of the Tiger in an Asian restaurant in Alicante. | CORTES PILLAR

Nearly 10,000 Chinese reside in the province of Alicante, the fourth largest colony in the country, according to official data from the National Institute of Statistics. Chinese associations agree that there were actually more than 15,000 before the pandemic. Those who stayed will celebrate on Tuesday, almost 9,000 kilometers from China, the New Year of the Water Tiger, which symbolizes struggle and strength. That day, February 1, marks the start of the year 4720 according to the Chinese lunar calendar. In the eastern country it is also called the Spring Festival: it is celebrated with fireworks, typical foods, a profusion of red in the decoration and envelopes with money for the children.

Decoration in a Chinese bazaar that opened about three months ago in the center of Alicante. | CORTES PILLAR

Residents of Alicante will enter the Year of the Tiger as a family and there are entities that prepare online activities. This is the case of the Bosi Intercultural Communication Association, which until the outbreak of covid organized parades and ceremonies in Elche in which the ritual of painting the eyes of a large dragon to attract luck was the star. The last time it was done, in 2019, the deputy director of the consulate of the Chinese embassy in Spain, Yan Zhang, was at the events. She chairs the Lili Pan association, which manages Possymulti Intercultura, academies in which Chinese is taught to Spanish children, Chinese born in Spain and other nationalities. The association will broadcast through its website two videos that a teacher has edited to publicize customs. They include congratulations from the mayor of Elche; university professors; the director of the Confucius Institute of the University of Valencia; the consul general of the Chinese HanYahui embassy or King’s College.

A client in a nail business in Alicante to prepare for the upcoming celebrations. | CORTES PILLAR

Interest in the language

Lili Pan highlights a new flourishing of Spanish interest in the Chinese language. «I have realized that more people want to learn it and come to class in Elche from Alicante or Santa Pola. Also Russians and other countries. We are an international family.” He returned to face-to-face classes after confinement and is recovering the student body after the damage of a pandemic that he considers has caused greater integration and union between Chinese living in Spain and nationals. “We all have to cooperate to protect ourselves, it is common. The situation affects us all equally. The world is small, it is global. The president of the Bosi association assures that some of those who left for China have already returned, but “many remain there, especially those with children, who stay to study.”

The Alicante-Xina Intercultural Association also promotes knowledge of Chinese culture by the local population and exchange. This year, explains Diana Chen, vice president and coordinator, the celebration of the events was brought forward to last weekend, and it was celebrated with workshops attended by a hundred people, mainly Spanish families, in a restaurant in Alicante. «Everyone ended up very happy, we wanted them to get involved and experience it in the first person. That they could play and do it themselves, from New Year’s dumplings, to calligraphy; paint colorful fans, taichi, and lion dance to publicize Chinese culture.

Xiao Min, who has lived in Alicante since 1990 and who has Spanish nationality, had his children here, and his grandchildren were born here, three generations of a Chinese family in the province. He left his country after the protests in Tiananmen Square with a visa to Germany, “but it was very cold, people were more serious, and I liked this. I have family in Valencia and the weather is very good». He opened a restaurant in Pla and then moved to the center of Alicante with a new business, the Asian Zhu, which was closed due to the pandemic for three months in 2020 and another three in 2021.

Also Read  'The ancient world': There is nothing more modern than antiquity | Babelia

“Everyone has suffered and there has been a lot of concern, but people are already vaccinated, employees too, I’m not afraid or anything. Now the work is a little slower due to the sixth wave but we have a lot of hope, the contagions are not so serious. I see this year better than last, I think the worst has passed. In his case, he lost 30% of turnover and, although the activity is still low due to the rise in covid cases and they had cancellations of company dinners at Christmas, he agrees with other Chinese entrepreneurs that this summer the recovery can be sealed with the return of the Bonfires and other events, and with the arrival of tourism.

“Many families returned to China even though they like to live by the sea, but I see a future here,” he says. In his case, he has a Spanish passport and they do not give him a visa. He lost the tickets he had to travel to China in February 2020, just before covid, to visit his 92-year-old mother. Its Chinese employees, before the pandemic, left for a month with their families to coincide with the New Year, but there are already two in a row that cannot go due to the difficulty of traveling, the expense of PCR tests, and quarantines. “Everyone is holding on,” he notes. Being nationalized, Xiao does not have the problems of other Chinese citizens in Spain with bank accounts since some entities canceled them despite having “well-located” businesses and paying taxes.

Chen Haojie was not afraid of the situation and started a business in the center of Alicante, Sugar Decor, three months ago. A large bazaar where he has had “a good Christmas” in terms of sales and believes that in the coming months “it will improve.” He was 10 years old when he arrived in Spain, twelve years ago, with his family, and “I like” Alicante. The New Year highlights the use of pyrotechnics, hence the Bonfires bring back memories of his homeland; the special meal with a sweet pastry for the whole family and the gift of money to the children inside red envelopes.

Changsen Zheng, president of the Association of Chinese Merchants of the Valencian Community, pointed out that the covid has had a lot of influence “and has affected business issues. The economy has many variations but we are holding on and little by little we are going back ».

Activities on day 4 online about the Winter Games

Songs, dances, plays, drama and magic presentations and stories created by children are part of the special program for the Chinese New Year organized online, that is, virtually, by the Bosi Cultural Association for the 4th of February. They have also designed game links and riddles about the Spring Festival and the Winter Olympics, which will be held between February 4 and 20 in the Chinese cities of Beijing and Zhangjiakou. At the end of the gala there will be a session of red envelopes and a program so that the people of Alicante learn more about the festivities in China.