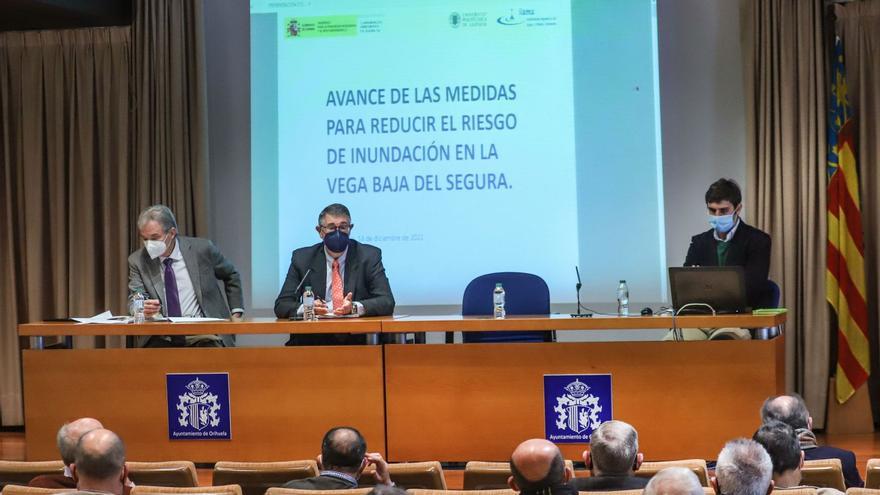 Restlessness and concern was what was verified yesterday in the information meeting convened by the Segura Hydrographic Confederation (CHS) with the irrigation communities of the Vega Baja, who know every inch of the land, about the solutions provided to minimize the risk of flooding in the region. The president of the CHS, Mario Urrea, in the auditorium of the CAM in Orihuela, explained about the image taken from a satellite, which showed the water accumulated after the DANA in 2019, that the objective is to drain through the random. This is, on the one hand, when there are avenues to divert the water to the Hondico de Amorós and from there to the old riverbed to the sea; on the other hand, create green corridors, such as Campaneta-Hondo, to evacuate.

The objective, he insisted, is to widen the channel between Orihuela and Guardamar to relieve the river in a homogeneous and controlled way. In short, redistribute rolling the land. The proposals generated uncertainty among some landowners and raised a sea of ​​doubts among several attendees, especially from the municipalities of San Fulgencio, Dolores, Daya Vieja and Daya Nueva: “We swallowed it,” they said, understanding that what is intended is to flood the lower area instead of taking the water to the sea. “Putting together all the hazards is damaging the area,” they argued. “I am not going to solve something harming others,” Urrea replied, adding that the call was to listen, with the commitment that “the measures are adopted with a high degree of consensus.” To the reluctance were added the reproaches: «We are late; to avoid controversies we had to have sat down beforehand, ”some irrigators said. Urrea clarified that “the mistake is to think that this proposal is what is going to be done. We do not come to impose anything nor do we have a closed position ». In fact, he stressed that the drafting of the draft has not yet been put out to tender, and called them to another meeting at the end of January.

According to the irrigators, the Rambla de Abanilla is the one that poses the most problems. The judge of Aguas de Orihuela, Pedro Mompeán, stated that “expanding over the promenade we would heal the entire Vega Baja”, making a straight channel to the sea, in an area where there are scattered houses: “Whatever it takes,” he commented, including expropriations. “Anything that is making detours are patches that will not be worth anything,” he concluded.

In addition, the CHS technicians have identified three bottlenecks: at the exit from Orihuela, where the slope is lost and causes a backwater; around the junction of the AP-7, at the entrance of Formentera del Segura, where they plan to achieve an escape route, and in Rojales they intend to make a fourth eye on the bridge so that 100 m3 per second more can flow, since in the DANA flow was 200 m3, half for which it was designed.

Management plans that set their horizon in 2027

Mario Urrea, president of the CHS, explained yesterday that “the solutions in Vega Baja require the consensus of the administrations and users.” For this reason, he wanted to listen to the irrigation communities, after several meetings with the Generalitat and the municipalities, to reach agreements on flood risk management, plans that have 2027 as a horizon. At the moment, most coincide in the actions in the Rambla de Abanilla to divert flows towards the Santomera riverbed and the Tabala dam, something that, according to him, will be concluded by the end of 2022.