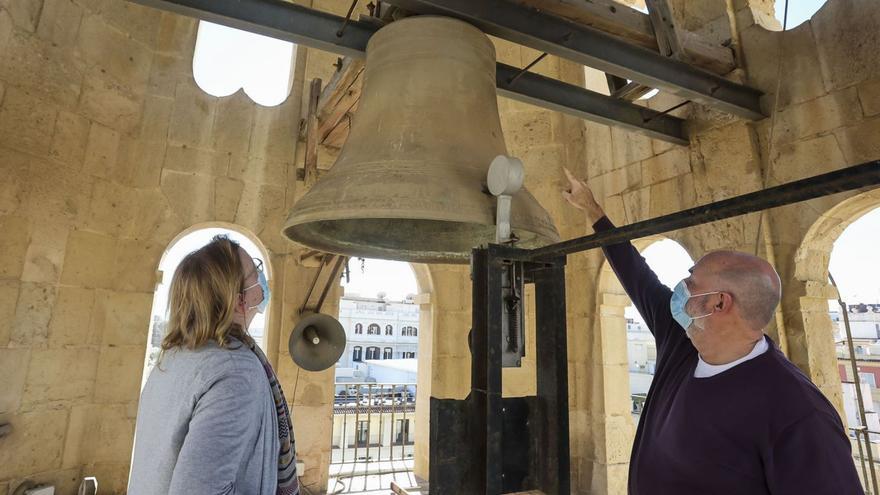 All the people of Alicante know that at the top of the clock tower of the Alicante City Council a large bell rings every hour. But not everyone has ever seen close-up images of that bell whose inscriptions indicate that it was cast in 1699, and very few are aware of a completely surprising fact, and that is that it bears inscribed an exorcism that it launches into the air every time it rings to protect the city from the Evil One.

According to a work carried out by the Latin professor at the University of Alicante Antoni Biosca and published in the magazine Saó, in those years «it was common to add prayers or images of saints on the bells to transmit with the sound the blessing of the image or the prayer. The inscriptions that can appear on the historical bells are very varied. Some include phrases that describe the role of the bell in the first person, as if she herself were explaining it to us ».

This is the case of one of the bells of the San Nicolás de Alicante co-cathedral, founded in 1826, which has the Latin inscription “Laudo Deum, convoco clerum, defunctos ploro, nimbumque fugo”, which means “I praise God, I summon the clergy , I cry for the dead and I make the clouds flee ». Biosca explains that other bells of this Alicante church have short prayers written, as is the case of the bell of 1846, which shows “Santa Maria, ora pro nobis” (“Santa Maria, pray for us”), or the inscription of the 1681 bell, “Si Deus pro nobis, quis contra nos” (“If God is for us, who can be against us?”).

But the most striking of all Alicante bells is undoubtedly the one located on the clock tower of the town hall building. It is a bulky and heavy bell, weighing approximately one and a half tons. The inscriptions indicate that it was built in 1699 by the city of Alicante for its municipal public use.

It has various inscriptions and images. Antoni Biosca says that “it is supported by handles with figures that represent in quadruplicate the face of a monstrous animal, similar to a dragon with a large nose. Perhaps this animal is related to the apocalyptic content of the text of the bell, but it is likely that it is only a decorative element. The bell has two text stripes and is adorned with images of different sizes, of which a large Latin cross with a pedestal stands out. At the top there are four small images directly related to the religiosity of Alicante: the Holy Face, the Virgen del Remedio and San Nicolás, and a fourth more doubtful identification image, which could be San Roque.

One of the inscriptions explains the date of construction and the names of the authorities of the time. The other inscription shows the religious content: «Ecce crucifix Domini fugite parts adversae vicit leo de tribe Juda. Radix David alleluia alleluia. Auxiliet Maria auxiliet Nicolaus ”, whose literal translation would be:“ Behold the cross of the Lord, flee enemies, the lion of the tribe of Judah, the root of David, has conquered. Hallelujah hallelujah. Help Maria, help Nicolás ». Help is requested from Mary and Saint Nicholas of Bari, patrons of the city, as well as from the Root of David, “referring to Jesus as heir to the throne of Israel formerly occupied by King David. Radix David, as a lion of the tribe of Judah, is an epithet that appeared in the Apocalypse to refer to Jesus, a type of confrontation against the forces of evil to defeat them “, underlines the UA professor.

The Latin prayer of the bell has its own particular history. It is a very brief form of exorcism. «It can be found, for example, in the Latin manuscript 3,576 of the National Library of France, from the thirteenth century, where it appears as a recitation to defeat Satan:« Here is the cross of the Lord, flee enemies, the lion of the tribe of Judah, the root of David, hallelujah, hallelujah, Holy, Holy, Holy, Christ, remember us, amen, remember, Satan, I order you to surrender for a punishment ». Likewise, the 12th century chronicle of the abbey of Saint-Hubert narrates that the prior expelled the Devil from the cloister with this request, and the Englishman Herbert de Bosham, of the same century, advised adding the request on the flags to defeat the forces malignant », says Antoni Biosca.

It is very possible that this prayer was recorded on the Alicante bell under the influence of the Franciscans, since popular tradition narrated that Saint Anthony of Padua had practiced an exorcism on a young woman who suffered the attack of the Devil in the form of a false Jesus Christ who asked him to commit suicide. «When he was close to committing suicide, he begged Saint Anthony to help him, and he gave him a stamp with this request. The woman was immediately released. The success of the exorcism had a special devotion among the Franciscans, and Pope Sixtus V, who was a Franciscan, ordered in 1586 that the prayer be engraved at the foot of the obelisk in St. Peter’s Square in the Vatican, where it can be seen today, “he explains. Biosca.

Thus, it has been more than three centuries since this bell with religious images from Alicante launches an exorcism every hour from the tower of the town hall to protect the city and avoid the influence of the Devil on us. Its effectiveness or not, is another story.