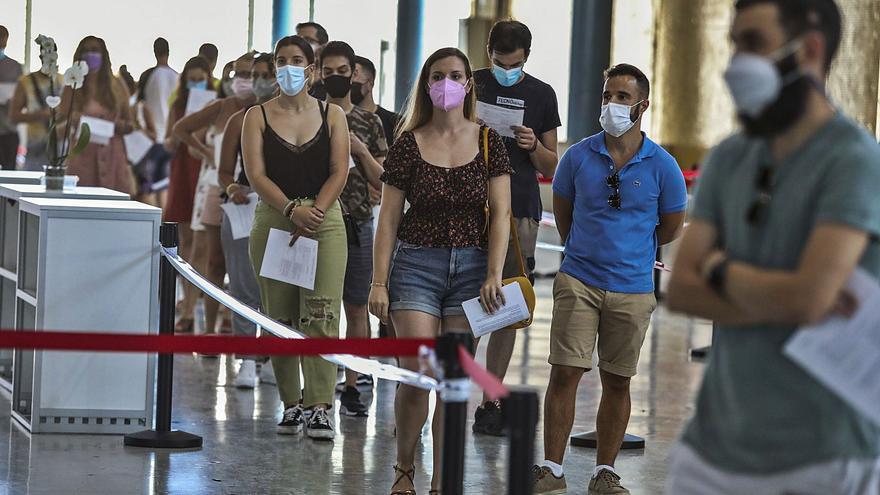 The one with the twentysomethings It is the age group that concentrates a good part of the coronavirus infections this summer, exactly 30%, so Health wants to step on the accelerator to vaccinate this segment of the population as soon as possible. However, the rate at which the doses are being administered is advancing very slowly and the Community, with 40.8%, is behind in the number of twenty-somethings who have received the first dose. They are 15 points less than in the whole of Spain (54.3%) and the Valencian region is the fifth autonomous region with the lowest percentage of vaccinated population in this age group. Only La Rioja, the Basque Country, Cantabria and Galicia are worse.

On July 27, those under 30 years of age began to be immunized and in these ten days they have gone through the vaccination centers of the Valencian Community about 211,000 young people. This segment of the population is the recipient of two out of every three doses that the Ministry of Health plans to inoculate this week. According to the department that directs Ana Barcelo, autonomy is scheduled to administer 279,867 punctures, of which almost 175,000 are reserved for twentysomethings. In fact, since Monday the administration of doses to this group has increased, since at the beginning of the week only 28.4% had a dose on. Health has increased twelve points in two days.

This is not the only group of the Valencian Community that lags behind in vaccination. As a whole to thirty-year-olds, our autonomy stands at 28.4% compared to 42.2% of the Spanish average and in global terms, we are also in vaccination percentages lower than the national set. 74.8% of the Valencian population have at least one dose (77.5% national) and 64.4% have the complete regimen (66% in Spain as a whole). Less coverage despite the fact that the Valencian Community has administered 95% of the doses received, the same amount as the national average. From Health they insist that our autonomy has been harmed with the distribution imposed by the ministry based on doses per 100,000 inhabitants, since In the Valencian community there is a high number of young people. In addition, Health has used nearly 100,000 vials to administer to displaced people from other autonomous communities. To correct these imbalances, the Ministry of Health has promised that this August 240,000 additional doses will arrive from the Moderna laboratory, which added to the 340,000 from Pfizer will allow us to reach 70% immunity in the third week of August.

Secondly, the Ministry of Health reported yesterday that more than half (57%) of cases associated with coronavirus outbreaks occur in people between 15 and 34 years old, followed by the age group of 35 to 64 years, which accounts for 23% of cases associated with outbreaks. As age increases and, therefore, vaccination coverage, the number of infections decreases. In addition, 79.3% of outbreaks are triggered in the social sphere, especially in family gatherings or with friends. On the other hand, small outbreaks predominate (less than 10 cases). In fact, 85.5% of new outbreaks have fewer than 10 cases, 14.1% have between 10 and 40 cases, and there are 0.5% of more than 40 cases. Of the outbreaks reported in the last three weeks of July, 63% are from the province of Valencia, 24% from Alicante and 13% from Castellón. The Minister of Universal Health and Public Health, Ana Barceló, recalls that the work that 1,622 trackers had been doing has been reinforced with the incorporation of 500 more, 50 of them from the Army, who will help in the monitoring of cases and alleviate the workload of the teams Primary Care.

Health prioritizes the vaccine among pregnant and lactating women

The Ministry of Health, within the campaign vaccination against covid, It is prioritizing pregnant women with the aim of fully immunized reaching the period of pregnancy in which there is a greater risk of complications if the infection is contracted, and which is from the end of the second trimester. The recommendation to get vaccinated against Covid 19 it also extends to those who are breastfeeding or planning to become pregnant. In this sense, the Public Health Commission of the Interterritorial Council of the National Health System agreed on Tuesday to recommend the vaccination of pregnant women in any trimester of pregnancy.

30% Contagions in the twentysomethings age group

Twenty-somethings concentrate a good part of the covid infections that have occurred this summer.

79% Sprouts produced in the social sphere

﻿79.3% of outbreaks are triggered in the social sphere, especially in family gatherings or with friends. Small outbreaks predominate (less than 10 cases). Thus, 85.5% of new outbreaks have fewer than 10 cases