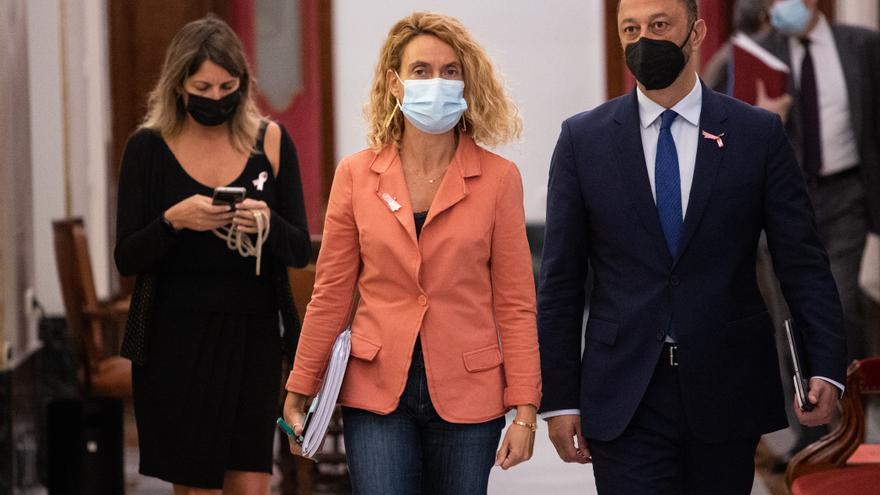 The public support of United we can to Alberto Rodríguez’s complaint against the president of Congress, Meritxell Batet, for allegedly prevarication it has shaken the institutional foundations of the country. A party that is part of the Government promotes and applauds an action that attacks the third authority of the State. However, the shock wave has also been internal. As you may have known ‘The Newspaper of Spain ‘ from sources familiar with the maneuver, the second vice president and predictable candidate in the next elections, Yolanda Diaz, was not consulted. Neither does the Minister of Consumption and general coordinator of the United Left (IU), Alberto Garzón.

The Labor Minister possibly had her worst day this past Friday since she entered the coalition Executive. The president of the Government, Pedro Sanchez, supported that the economic manager, Nadia Calvin, participate in the coordination of the internal process to carry out the labour reform and repeal the Mariano Rajoy model. To date, Díaz was in charge of it. “It is not interference; it is coordination, it is cooperation,” said the chief executive in Brussels, at the press conference after the European Council. The irruption of the first vice president in the network of dismantling the labor system anticipates ideological and methodological clashes with the Minister of Labor. Their views are antithetical.

During the afternoon of Friday the situation worsened. The sequence, summarized, is this: 1. The president of the second chamber of the Supreme Court, Manuel Marchena, He sends the clarification required by the Bureau of Congress on the validity of Alberto Rodríguez’s deputy act, in which he affirms that the sentence of conviction must be carried out. 2. Batet decides to withdraw the seat from the Tenerife deputy. 3. The top leadership of United We Can comes out in a whirlwind on social networks against the judges and against the president of Congress. 4. The purple formation announces that Rodríguez will sue Batet for prevarication.

The deputies of United We Can were informed about this outcome late in the afternoon through an internal message. Among the recipients was Díaz. The Minister of Labor received notification of a measure already adopted. According to the information collected by ‘The Newspaper of Spain ‘, she was not consulted in advance nor was she asked for her criteria or opinion.

Alberto Rodriguez was convicted despite evidence showing that he was not there. The objective was to take away the seat.

The Supreme Court pressures the Presidency of Congress to withdraw it although both know that it is not what the sentence says.

This Saturday, at the CCOO headquarters, the second vice president did refer to the repeal of the labor reform, and even his firm commitment to the coalition; but he has not made any reference to the complaint.

Echenique and the “confederal spaces”

The spokesperson for the parliamentary group in Congress, Pablo Echenique, was interviewed on Friday night on Cadena SER. He said that Díaz was informed in “the confederal spaces.” To the question “did you agree?”, The deputy responds: “I don’t remember who said what at all times, but I understand that they did.”

Alberto Rodríguez was convicted without evidence. Even so, the sentence does not include the withdrawal of the seat.

Today Batet has yielded to the pressures of Marchena and the (ultra) political and media right who asked for blood and, on top of that, he has still done so at the risk of prevaricating.

This internal communication mechanism, usually Telegram, was the channel used by the Podemos management to report on the filing of the complaint. All the deputies are in it. Díaz, therefore, was informed, and so was Garzón, but they were not consulted beforehand. The decision was cooked by the Minister of Social Rights, Ione Grass, and the Secretary of State for the 2030 Agenda, Enrique Santiago, indicate the sources. Members of the confluences admit, in conversation with this medium, that they never thought they would go this far.

Bureau of the Congress

United We Can has three representatives on the governing body of the Chamber: Gloria Elizo, Gerardo Pisarello and Javier Sánchez. All three voted in favor of sending a request for clarification to the Supreme Court during the meeting held on Thursday. Meeting that was prolonged and was very tense, according to what was said by two sources who were present.

Although no determination came out of that session, it did end with a certainty and an impression among the representatives of the PSOE and Podemos. The certainty: that Meritxell Batet would assume alone the permanence or retirement of Rodríguez in the seat; the impression: that she would opt for the withdrawal, because that was what she herself pointed out. United We can sources recognized ‘The Newspaper of Spain ‘ that the referral to the Supreme Court of a request for clarification on the scope of the sentence could play in favor of their interests, but the answer of Marchena, known on Friday, collapsed their expectations.

The president of the Congress of Deputies, Meritxell Batet, and the deputy of Vox, Ignacio Gil Lázaro. EP

The shadow of Rodríguez, however, will continue to be noticed. United We can advance on Friday, through Echenique in the SER, that they will go to the Constitutional Court with a appeal, and later, to European judicial instances.

Garzón demarcates Podemos from the lawsuit

The Minister of Consumption, Alberto Garzon, has assured this Saturday that the complaint against the president of Congress, Meritxell Batet, in which he is accused of “prevarication” for withdrawing the seat of the United We can deputy Alberto Rodriguez after being disqualified by the Supreme Court is a legal action of the affected “in a personal capacity”.

“It is natural that the affected person has thought to initiate the legal actions that his legal advisers consider appropriate. It is a question of legal action in a personal capacity by someone who is indignant due to this process that should not have occurred “, the minister made clear before presenting in Madrid a campaign against the consumption of sugar among minors.

With these words, Garzón unmarked United We Can from the lawsuit against Batet, despite the fact that the formation announced this initiative last night. “We will file a complaint …”. This is stated in the statement of the parliamentary group in which the measure advanced.