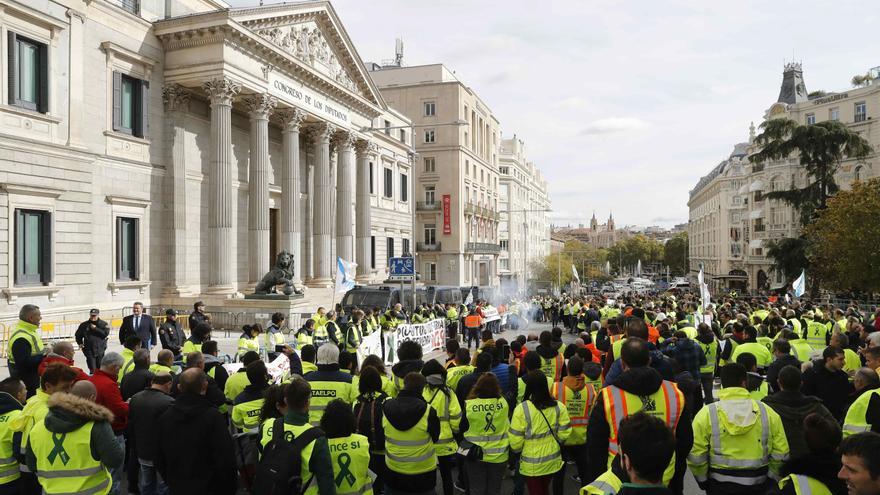 A citizen who feels unjustly deprived of his liberty has been writing to Congress from November 2020 with hoping that a solution will be found, be put in the way of reaching it or simply attend to it. Another, also in prison, is outraged because he has not been granted parole after turning 70 and wants Parliament to investigate why the relevant authority has refused it. A third asks for help because the villagers harass his mother-in-law and brother-in-law.

There is a place in Congress that is in charge of receiving complaints like this, complaints from people who suffer, who have been suffering a lot, who cannot take it anymore. Not everything in Congress is one deputy calling another a “witch” or apparently angry ladies and gentlemen knocking down the microphones from their seats with exaggerated vigor. Too it is a silent, sporadic job, such as the Committee on Petitions, whose meetings are always behind closed doors.

The functions are assessed in article 49 of the regulations, but in most cases the procedures fall into a bureaucratic morass and in vague, abstract and unsatisfactory answers; often too late. Citizens who feel hurt by the civil administration or by the justice can knock on its door, and yes, they manage to enter, but once inside they get what they are looking for.

As a general rule, citizen protests or claims, made in a private capacity, are sent to the Ombudsman. A second group of procedures is assumed by ministries or parliamentary commissions related to matters of competence. The third group would be those filed as they are matters that exceed the scope of action. They are often disputes or court decisions on which the Committee on Petitions cannot rule.

‘The Newspaper of Spain‘ has accessed the report of the last citizen complaints processed and forwarded, dated November 22, 2021. The Petitions Committee had another meeting in December, but its purpose was different: the analysis of the compatibility of new activities of certain deputies with their position or reviewing the activities of newly arrived parliamentarians.

The document does not include all the documentation for each case or the petitioner’s personal information beyond his identity. The protest or petition, the referral to the body affected or best positioned to respond, the deadlines and the final agreement on the matter are outlined. There are three blocks: the questions seen in the last session, the new ones and a final section dedicated to evaluating certain answers.

Deputies on the ground

The Petitions Commission is one of the three that Congress must necessarily create ten days after its constitution, since, together with the Board, which assumes the internal government, they cover management areas. The Rules Commission, for example, ensures compliance with regulations, as its name suggests; that of the Statute of the Deputy safeguards the rights and duties of the 350 representatives of the citizens and the Petitions, in addition to ensuring that everything that your honorable Members do outside the Chamber is compatible (and legal) with what they do inside, it also regulates the traffic of what citizens ask their parliamentarians directly, and the time that this entails.

The idiosyncrasy of this body is not political. Unlike the other permanent and non-permanent commissions, including those of investigation, that of Petitions is not characterized by friction between deputies from different groups. In fact, the composition comes from the preferences expressed at the polls, in the elections. The presidency falls to a member of the majority group, the first vice-presidency in the second group and the second, in the third. Expressed in a few words: Right now it is chaired by PSOE, Y PP Y Vox hold the vice presidencies .

However, not long ago, a more than interesting debate has erupted because it touches the very essence of political representation. A source from Congress, aware of the type of discussions that the Commission usually hosts, points out to ‘The Newspaper of Spain‘ that on too many occasions the deputies that make it up do not know how to deal with the requests. “These are desperate situations; citizens, citizens who are having a very bad time and who go to Congress generally because they have previously knocked on doors all over the world without success: either they have not been listened to or their requests have been rejected,” narrates this fountain.

In the explanations nest two key factors of the problem that slows down the work of this Commission, while reducing its efficiency. The first is that it is the first parliamentary window to which desperate or outraged citizens come, which is the prevailing feeling. What deputies read are usually painful and sad stories. The second is that, paradoxically, that first window is the last of a long journey through which municipalities, councils or, in most cases, courts have already passed. What can be done so that the almost always very wide channel of communication with the citizenry is narrowed?

“One option, but only raised as a reflection for the moment, is that the petitions, in addition to bodies such as the Ombudsman or a ministry, be sent to the deputies of the province from which the claimant is. To all the deputies of all The parties will depend on the direction of each group, and of course on the sensitivity of the deputy, what importance is given to it. Their thing would be for the deputies of that province to try to take an interest in the problem and see what they can do, if anything can be done.

Also Read  Rufián warns the Government: "Either solve the situation of the prisoners or he will make decisions"

I have received in @Congreso_Es to relatives of political prisoners of the Nicaraguan opposition to whom I have conveyed the solidarity and shared demand for their release, as well as the commitment to #Spain in defense of the #DDHH, freedoms and democracy in #Nicaragua. pic.twitter.com/g50at8R2DR

The reflection points to a striking terrain, which evokes parliamentary operations in other countries, in which the deputy or senator is obliged to have more direct contact with the voters, whether they are theirs or not. It will be interesting to see if this dissertation has a foothold in the Chamber. Nevertheless, anyone can directly address their lordships because their email addresses are seen in the web.

From mailboxes to the Cuban regime

As reflected in the regulations, the Petitions Committee sends complaints to the Ombudsman, parliamentary committees, the Senate, the Government, the courts, the Public Prosecutor’s Office, the autonomous communities, county councils, councils and town councils. . The fan is big. The percentage of effective response, not so much. There is one more option: that the question be archived, of which the affected party will be informed.

The claims are varied. A review of the new ones that were incorporated into the Commission’s list last November throws up surprises. A citizen requests that it be extended the ownership of a niche in the cemetery of Sabiñánigo (Huesca), which the members of the Commission have referred to the City Council. Another gentleman wants Congress to urge the Post Office to find solutions so that the yellow mailboxes on so many streets do not disappear. The answer was the referral to the Ministry of the Presidency. From Lugo, a neighbor requests that the protection of the wolf in the region be prevented because it attacks livestock and domestic animals. The Commission has sent the petition to the Health and Ecological Transition Commissions.

The modification of the divorce law, a different distribution of a widow’s pension, that there is more control in public residences that care for people according to their degree of dependency, the improvement of their situation in a penitentiary center, the publication of the list of unregistered assets of the church… This is a review of some of the requests that the Congressional Petitions Commission will process since November, which are 18 in total. Its mission is to be aware of them and ensure that the claimant receives an answer. Another thing is what answer.

The one of the father who loves improve your child’s situation (no further information is attached) has been underway since September 2019. Just looking at that brief information and the delay in deadlines causes astonishment. For a year now, a citizen has been asking for an investigation into the unjust deprivation of his liberty, and for a year now, an inmate has wanted to know why he is not granted parole once he reaches 70.

Image of a demonstration. TERM

In March 2021, a family asked Congress to study the expulsion of their son from a foreign school, and incidentally, the Situation of Spanish children in schools from other countries installed in Spain. Here the Commission has asked the Ombudsman to continue with the case. Just as the Committee on Foreign Affairs of the Chamber has received a request from a man to condemn the Cuban regime.

Issues of public debate were archived. The citizen who requested that the insults to the Civil Guard be investigated on social networks was notified of the file of his instance because, after passing the request through the Interior Commission, it was found that he lacked the powers to do so. Protests over judicial decisions also came to nothing, which is usual, since litigation mediation is not among the functions of the Commission.

Reading the report can overwhelm what is not counted. These cases have been in process for a year or more, there are the issues resolved and those that were archived. Some have been mentioned in this information.

Whatever the Commission does with them, They are always situations that suggest desperation and weariness. A citizen began to request in June of last year that, simply and simply, he be attended to. Another asks to see a specialist. Nothing is said about his ailment, injury or illness, but how will this person be to write to Congress in search of a solution.