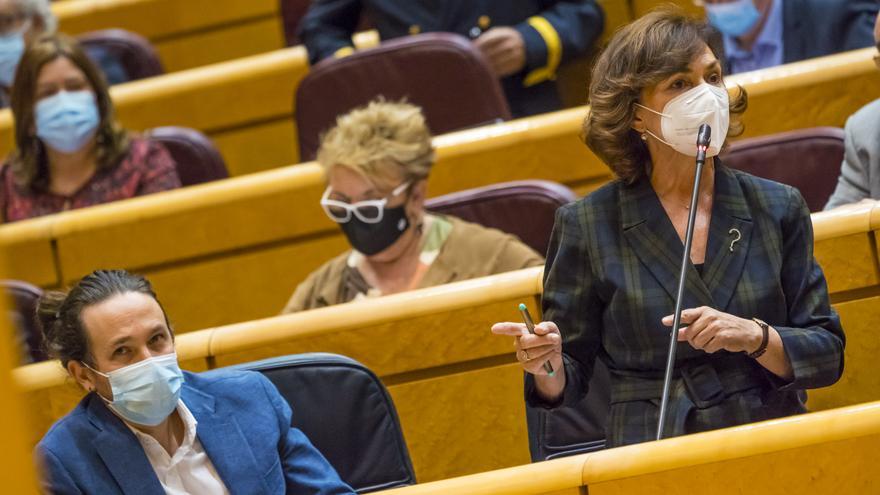 The parties of the investiture, in their pincushion of ‘gestures’ to support the General State Budget (PGE), and with it, the permanence in power of the solicitous dealer –ask me whatever you want– They demand compensation and, as their achievements attest, they are getting it.

The interrupted attempt to undermine the independence of the Judicial Power; the delegation by the State of the management of the state of alarm to the regions; the suppression of Spanish as a vehicular language; the brushed of the charter school and special education; the modification of the penal code to facilitate pardons for crimes of sedition; the setting up of a ‘truth committee’ to monitor the media has to do with carrying out, however, the accounts of the coalition government, which shows a better predisposition to make concessions to the parties that voted in favor of the motion censorship.

Judicial independence and respect for the rule of law. The nationalist bulimia in his career, less and less camouflaged, to independence; the commitments acquired, on which the motion of censure and the government alliance were based, which occurred due to the poor results of the coalitions, are at the origin and are the support of an imminence in progression, which concerns the rule of law.

Pending ratification by the 27 Member States and the plenary session of the European Parliament, the agreement reached between the Community institutions on a mechanism that links the granting of funds to abiding by the rule of law, seeks to protect the values ​​of the EU, by allowing stop funding governments “when it seriously affects or threatens the reasonable management of the EU budget”.

The Cuesta de las Perdices factory has listened to the objections of the Commission – Uncle Paco with the reduction – regarding the independence of the Judiciary, urging to negotiate an agreement with the opposition to renew the governing body.

The extent of the pandemic and the management of the alarm. In the democratic state, sovereignty resides in the people, whose power gives it direct support, so that these decisions cannot be delegated and cannot be approved by Parliament without denying itself.

When fundamental decisions that are adopted in exceptional situations are displaced or divided, what in reality is being done is depriving citizens of the exercise of their most proper powers, dispersing the sovereignty that belongs to them.

It should be added the displacement of competition and, therefore, the responsibility for its exercise, in order to get rid of the presumed electoral cost.

The suppression of Spanish as a vehicular language. Cornering the Spaniard is a symbolic surrender of extraordinary significance. This does not mean that it ceases to be a toast to the sun because, since the 1980s, the machinery was in motion, when the Catalan governments passed through the triumphal arch, Article 3 of the Constitution: “Castilian is the official Spanish language of the State. All Spaniards have the duty to know it and the right to use it ”.

In this umpteenth educational law, supposedly destined to regulate the functioning of education, beats a political undertone, institutionalizing an unjust situation and becomes the cotton test of how a government has to crawl behind a group that not so long ago he dared to shake the Constitution unsuccessfully.

Spanish is no longer a “vehicular” language in Catalonia. The withdrawal of the mention of Spanish, as the official language of the State, is one of the originalities that this new attempt without consensus incorporates. The model of compulsory immersion in Catalan has been perpetuated. What remains is a certain institutional hypocrisy. From now on, the trivialization of the language, discriminating against Spanish, will be done in accordance with the law.

Perhaps it is simply the dribbling of someone looking to put on a medal, with his sights set on the next Catalan elections. And, incidentally, it can serve to remove from the table that cooks the accounts, a party that continues to seek its identity.

Cela (not to be confused with Celaá) said: “Castilian is the beautiful Spanish that is spoken in Castile.” The battle was lost when the Constitution called the Spanish language “Castilian”.

But there is more meat on the plate: The freedom of parents to choose the model of education for their children. The abolition of special education. The elimination of concerted schools that separate children by sex (model that the Constitution supports). The unfortunate approved generals, so dissuasive from effort. The introduction of the Culture of Religions, a secular alternative to the Religion subject.

The creation of a ‘truth committee’. After the announcement of the Democratic Memory Law, a monopoly of the official truth, and through a simple ministerial order published in the BOE, it is intended to limit the right to information, which is equivalent to imposing a censorship with presidential control, which is It will deal with whoever dares to contradict or report on what the Government considers false.

With the prosecution resisting investigating the prostitution of minors in guardianship centers in Mallorca or TV3 sowing anger without quarter, one could get the impression that it is a mechanism to investigate disaffected and harass them.

The neutrality of the Public Ministry, questioned, contributes to reducing judicial independence; assignments to those who undermine the rule of law; the recourse to a state of alarm with immediate effects on rights and freedoms and the last attempt to censor information are clear signs of a drift that afflicts the rule of law.

A clientelistic system that affects public concessions of political importance, such as the press and education, has provoked misgivings in the European institutions, careful to avoid compromising fundamental rights, basic to the democratic system, such as freedom of information, opinion and expression.

The reaction of the silent passives could help to make the occupation of the state by the parties in power more difficult. Along with this need, there is the courage of the free press and the vigilance of who pays the bill, the European Union.