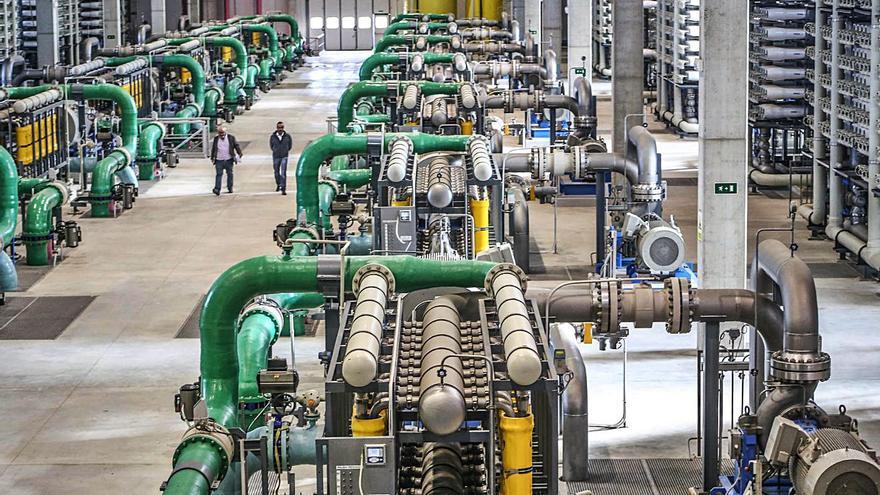 The Ministry of Agriculture will raise in a future meeting with the General Directorate of Water of the Ministry of Ecological Transition building a photovoltaic solar power plant that make it possible to lower the energy cost of production from desalinated water of the plant of Torrevieja.

The objective is that the installation can reduce the current cost of producing desalinated sea water by twenty cents per square meter. Since 2019, the Torrevieja plant is capable of producing 80 cubic hectometres of water per year. Although it was planned to supply 50% to urban consumption and the other 50% to agricultural use from farms irrigated by the Tajo-Segura, most of the water produced since it was started has been used for agricultural consumption by the Union’s communities. Irrigation Center of the Tajo-Segura Aqueduct (SCRATS). The general director of Water of the Ministry of Agriculture, Manuel Aldeguer, explains that the idea of ​​feeding the plant with renewable energy has already been raised in different meetings with the Ministry in recent months.

What the Generalitat puts on the table is to create a private public entity, with participation of 20% of the autonomous administration and to finance the work in part with European Reconstruction funds (Covid), given the impact that the action would also have to avoid the consequences of climate change with the reduction of C02 emissions.

The energy cost is the one that continues to weigh down the final price of the cubic meter of desalinated water. The annual energy consumption of the Torrevieja plant in 2019 was 264 gigawatts -hour. Reverse osmosis requires high energy consumption to subject seawater to sufficient microfiltration pressure that removes salt. The technological renovation and the greater production -which has gone from 40 to 80 hectometres per year in Torrevieja since 2019- have allowed to reduce some costs, in addition to the energy subsidy by the State.

The largest in Europe

Aldeguer considers that it is not necessary for photovoltaics to be geographically located in the surroundings of the Torrevieja plant – the most important in Europe in the production of desalinated water. Since the beginning of 2019, the infrastructure has a substation and high and medium voltage lines that allow a solar power plant far from the city to evacuate its energy to the plant. A line that runs from Sierra Escalona to San Miguel de Salinas. The Generalitat considers that the State Water Company of the Mediterranean Basins (Acuamed), which is the one that manages the desalination plant, could also choose the direct route of awarding the construction of a plant to a private operator and linking all its energy production to which the Torrevieja installation needs.

The Torrevieja plant, operated by the multinational Acciona, began to be built in 2006 and to distribute water in 2014. It operated at half gas until the drought period of 2017, in which it began to supply the Mancomunidad de Canales del Taibilla, at the same time. It was time that the SCRATS communities began to request concessions for this water from the Hydrographic Confederation. Most of its flows – 99% of the 76.4 hectometres produced in 2019 – are used to irrigate the Campo de Cartagena and Riegos de Levante Right Bank of the Segura River in the Vega Baja, from Guardamar to Pilar de la Horadada, through the deliveries of the Pedrera reservoir and the Tajo-Segura post-transfer canal. Although the irrigators have harshly questioned the cost of the cubic meter, which is estimated at sixty cents, the requests for concessions of these resources far exceed the offer and the Riegos de Levante Margen Izquierda communities that do not reach due to lack of infrastructure also request them through swaps. For example, waters from the Tajo-Segura Transfer, of high quality and lower price, but paid at the desalinated price.

Works for the expansion project to 120 hm3

The drafting of the expansion project for the Torrevieja desalination plant has been awarded to the UTE Desalia Water and Arada Ingenieria for 641,000 euros since last February. The joint venture began with a period of 24 months to draft the project that will allow the production of 120 hectometres of desalinated water from the seawater that the plant captures about 500 meters from the Los Náufragos beach.