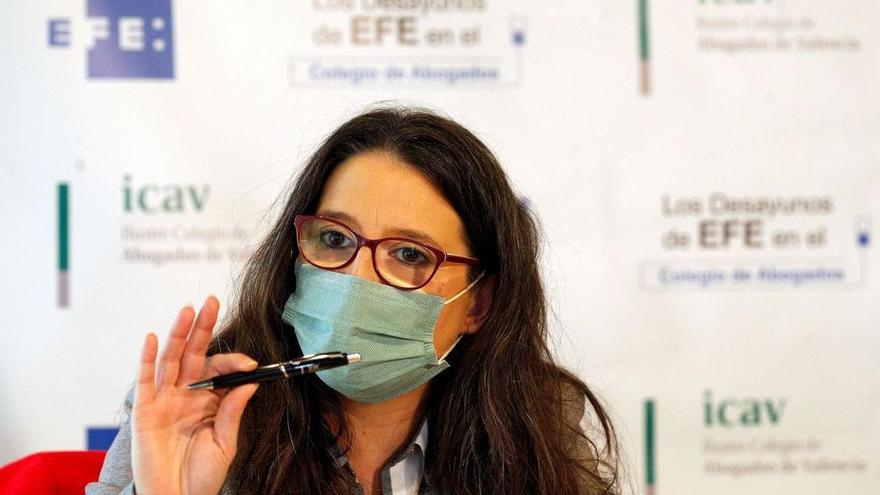 The spokesperson and vice president of the Consell, Monica Oltra, admitted yesterday the misgivings raised in the Executive branch by those legislative initiatives of the Cortes that end up conditioning the action of the Botanist. That is, the propositions of law that, although they have the endorsement of the forces of the left, regulate aspects of the management of the ministries. Oltra made this reflection when asked during the press conference after the meeting of the Consell about the suspension of the proposal of Circular Economy Law, a proposal worked by the tripartite (PSPV, Compromís and Unides Podem), but which has suffered a new slowdown when it was about to be presented.

As this newspaper reported yesterday, the Botànic parties had to cancel a press conference due to the problems of several regional ministries that were unaware not only of its presentation, but also of its content. This law, which at the time included the controversial waste management system SDDR, the last legislature already suffered a slowdown. The Ministry of Agriculture did not see the initiative clearly either, since it considers that the umbrella of state regulations is necessary in matters of recycling.

Oltra yesterday denied the major and tried to maintain the appearance of separation of powers between the legislature and the executive by ensuring that the Consell had not stopped that law and that the departments are on the fringes of the bills: «The ministries only know the bills ”, alluding to the initiatives that are drawn up from the regional ministries and sent to Parliament. Of course, he took the opportunity to indicate that the Consell prefers that those legislative initiatives that impact on government action are drawn up by the Executive and not by the Cortes. For Parliament, Oltra indicated, Other proposals such as the Electoral Law or those related to statutory entities would be reserved.

This position shows that the Consell prefers to tie the groups short to avoid conflicts, especially Unides Podem, the one that tightened the most in the Circular Economy Law and, also, that there is a clear lack of coordination between the Executive and the groups that support it.

This position is in contrast to the enormous production of bills in the botanical era, especially during the first legislature. Then, when Podemos was not in the Consell, the Botànic boasted of placing the Cortes at the epicenter of the political scene and important laws were promoted from Parliament. Some, like the incompatibilities of high positions, also gave problems. This was promoted from Compromís and was viewed with suspicion by the Ministry of Transparency.

In fact, one of the drawbacks of opposition to bills is that, unlike bills, they are not subject to legal controls. In the botanical stage, 34 bills have been approved. Oltra’s position contrasts with the decisions of other members of the Council, such as those of the Minister of Transparency, Rosa Pérez, who has decided to process the Transparency Law as a non-law proposal despite the fact that it has been worked on in her Ministry and not in parliamentary groups.

Legislative initiatives promoted from the Cortes and not from the Consell