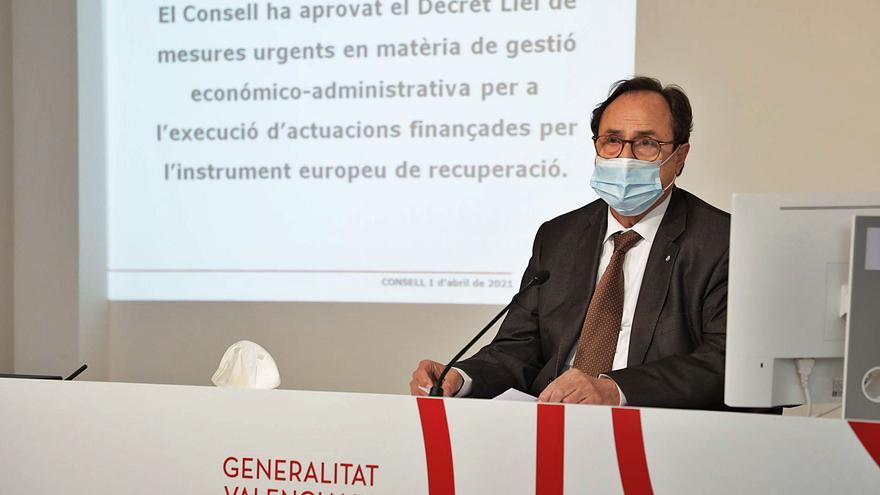 “The severity of the exceptionality and the severity of the crisis” derived from the covid-19, obliges the Generalitat to “act quickly in the face of any obstacle that may hinder the economic recovery of the Valencian Community”, yes, “always guaranteeing the legal certainty “, stressed the minister.

The authorization of a Valencian regulatory framework to articulate the management of European aid for the Recovery, Transformation and Resilience Plan, financed by the European Next Generation and React mechanisms, comes almost three months after the Government of Sánchez approved the Royal Decree for the Modernization of Public Administration. What the Botànic has now agreed to is the transposition to the autonomous sphere of the state regulations, as they have already done in other communities such as Aragon, Catalonia or Andalusia. It is an issue that has been working for weeks, but was stranded by internal, political and technical discrepancies between the members of the Consell. Yesterday, finally, there was a definitive agreement to lay the foundations that will allow access to funds that will involve an economic injection of 140,000 million in Spain, of which 72,000 million will be non-refundable grants.

So far, the Generalitat has already presented nearly 200 projects for a value of 12,000 million euros. These are investments that, if materialized, will serve to contribute to the transformation of the production model towards greater resilience, sustainability and digitization, Soler said yesterday. The head of the Treasury advanced that it will try to present the maximum possible proposals as long as they are “solid and feasible” to be executed within the deadlines set by Europe.

Among the novelties of this decree-law, it should be noted that it will allow the urgent processing of files related to projects and investments financed with European funds. In this sense, the expected deadlines will be reduced by half, except those related to the presentation of applications and appeals to guarantee legal certainty. In addition, a budget service, the so-called Service 99, is incorporated within each section, to improve project management. It may be provided with its own resources and it may also resort to the advance processing of any type of expense file before the end of the year, charged to the subsequent year. Projects that are of significant significance will also be subject to a prior control and verification regime.

The heads of the ministries may be competent to approve credit transfers between programs belonging to the same chapters of their departments; the regulatory bases and the summons may be approved in a single file; the actions will have to incorporate criteria of social responsibility, environmental, digitization and innovation and knowledge; and the constitution of consortia for the management and execution of the funds may be authorized.

The decree law also regulates other technical aspects such as the possibility of making advance payments both to natural persons (when the amount of the subsidies does not exceed 6,000 euros) or to municipalities (up to 30% if they are capital transfers) for specific cases such as direct grant aid or agreements and provided that a system of guarantees and adequate control are established.

In addition, it increases to six million the amount of subsidies for competitive competition that may be approved by the ministries themselves if they have the perceptive control reports. In terms of personnel, civil servants may be assigned exceptionally to the management of projects with European funds and, in the event that their functions are those of a job with higher remuneration, it will entail a salary increase.

The officials who depend on the Generalitat Valenciana finally have a regulatory framework that regulates the provision of remote services. The Plenary of the Consell yesterday approved the decree by which teleworking is organized for its staff. It will apply to civil servants and labor personnel of the Administration of the Generalitat whose management corresponds to the General Directorate of Public Function. This is a project that establishes that, under normal conditions, telework days may not exceed three days a week. The new regulation, which comes from the Ministry of Justice and Public Administration, led by Gabriela Bravo, has been blocked for months due to disagreements between the Botànic members.

One of the points of friction between PSOE and Compromís was in the regulation of telework for the high positions of the Consell, those typified with the level of complement of destination 30. Finally, it has been reflected that they will only be able to do it when they are authorized by Public Function. The decree also allows staff to take advantage of a form of teleworking for occupational health reasons, for effective protection in the event of being victims of sexist violence or terrorist violence. Also by family conciliation.