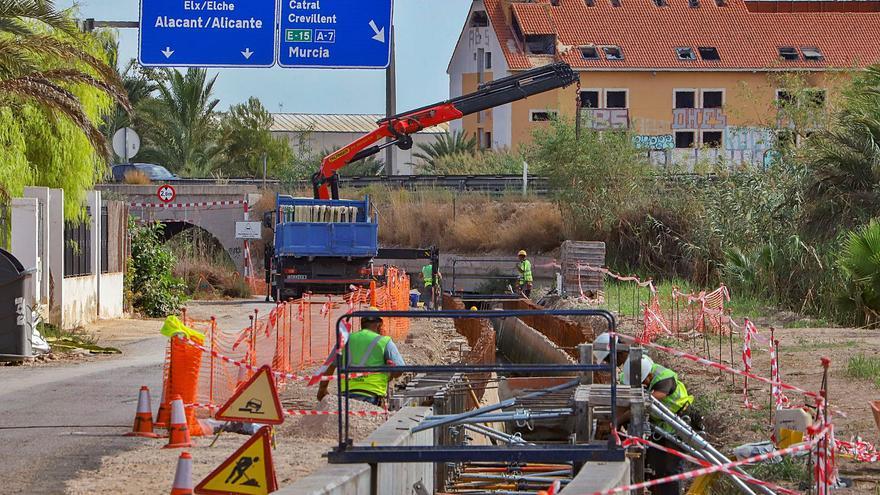 The Generalitat is going to incorporate two irrigation modernization projects in the Vega Baja in the 2022 budgets. One focused on one of the most important irrigation water transfer communities in the region, San Onofre de Torremendo, and another focused on improving the capacity of water resources of the wide area of ​​traditional irrigation of the Segura river in Callosa de Segura. In the irrigation community of San Onofre, which has 1,900 hectares, it will finance and execute a project to build solar plants to reduce the energy cost of driving water resources. The amount exceeds six million euros. One of the facilities will be located on the water surface of one of the community’s irrigation reservoirs and another will occupy around one hectare of the same community. The project was advanced yesterday in a visit by the regional secretary of Agriculture, Roger Llanes.

San Onofre, which spreads its crops, especially citrus, from the surroundings of the La Pedrera reservoir in Torremendo to the entrance of Hurchillo (Orihuela), is supplied with waters from the Segura taken in the Azarbe del Reguerón in Hurchillo, with a well also authorized by the Oriolana district and the Tajo Segura transfer. For three years it has also irrigated with water from the Torrevieja desalination plant and two years ago it obtained the concession for the Orihuela Ciudad treatment plant, although it needs the pipeline to transfer the water.

The project, similar in its characteristics to the one promoted by the Generalitat for the community of irrigators of La Murada in the post-transfer canal of Riegos de Levante Margen Izquierda, but larger, aims to reduce the energy bill by 30%. Energy cost that in this community already represents 50% of its total expenses. Because it must raise water resources from a level located just 30 meters high up to 200. The project, drawn up by the community itself, would adapt all the water pumping to photovoltaic energy, in addition to contemplating the execution of the pipeline of the sewage treatment plant. Orihuela Ciudad and build three reservoirs to reserve those water resources.

The objective is to be able to stop depending on the electricity supply of the network and avoid the high cost of the water rises that farmers are now paying. With the purified water intake, the community also intends to achieve a sufficient agronomic quality that can balance the high cost of desalinated water in Torrevieja. These farmers have had to overcome an increase in the price of energy of almost 50% due to the reduction of the resources of the transfer and its replacement by desalinated water. Something that makes the activity unviable if that cost cannot be reduced.

For its part, in the Callosa de Segura Water Court, the Generalitat plans to build a storm tank-reservoir that will allow traditional irrigation to have more resources. Callosa de Segura and Catral suffer secularly from the scarcity of resources in the «la cola» of the Segura river. The batch that corresponds to the Aguas de Callosa court is insufficient to water its entire garden, because it must give up the endowment that corresponds to Catral. With this project, valued at almost three million euros, it is intended to reuse the water that may accumulate from the rains while the installation acts as a reservoir for the water from the treatment plant.

The Generalitat has included an extension of a budget credit worth 2.8 million euros to undertake new works in hydraulic infrastructures in a total of 11 municipalities and rural roads: 9 in the Vega Baja and 2 in Baix Vinalopó, which suffered the devastating effects of the DANA that was unleashed in 2019. This item is added to the 20 million euros that the Ministry of Agriculture has invested in repairs, modernization and improvement of the capacity of chancels and ditches. The announcement was made yesterday by the regional secretary Roger Llanes who visited the works of the fortress of La Partición, which serves the district of Crevillent de San Felipe Neri. The irrigators of this community highlighted the importance of irrigation canals not only to guarantee agricultural activity, but also to evacuate water in flood episodes. They highlighted the need for the Generalitat to act now to improve the randomness of the Agreement, which serves the entire north of the region and flows into the old riverbed of the Segura. The work to be carried out is of a diverse nature and includes everything from the reconstruction of gutters and the repair of pipes, to the cleaning of canals, sealing of joints and conditioning of irrigation ponds. Although the actions will be carried out in 11 municipalities -Catral, San Fulgencio, Orihuela, Rafal, Callosa del Segura, Rojales, Jacarilla, Guardamar del Segura, Dolores, Elx and Crevillent- the number of works to be executed amounts to 15, since in some of them there will be more than one performance. The regional secretary of Agriculture, together with the general director of Agriculture, Antonio Quintana, assured that “this new investment package, together with other plans that we are finalizing for the future, is added to the 20.3 million that the Consell it has already allocated only to the chapters corresponding to hydraulic infrastructure and rural roads, which demonstrates with tangible facts the sustained and constant involvement of the Generalitat with the farmers and people of the VegaBaja ».