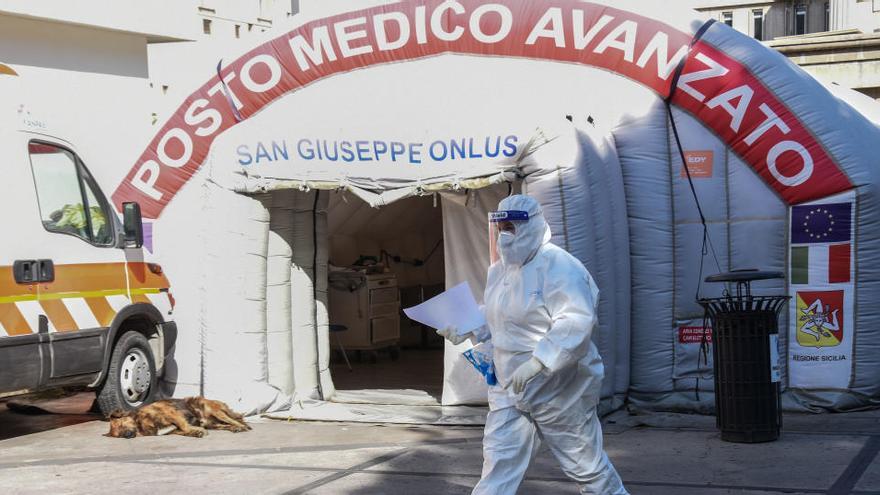 Coronavirus infections and the number of deaths continue to rise in most European countries, especially in Italy, where the situation is increasingly worrying, registering more than 600 deaths in one day and exceeding one million cases.

In a Europe that adds 13.5 million positives out of the 50.8 million recorded globally (with 1.26 million deaths), the World Health Organization (WHO) considers that the rise in the curve seems to be slowing down of infections in the continent, compared to the rise in America (21.8 million infections).

We must go back to the beginning of April, at the peak of the pandemic, to find a worse figure in Italy in terms of the number of deaths in one day than the one reported today, 623.

Italy, which registers almost 33,000 positives In a day to exceed one million, it widely exceeds the “critical” threshold for hospitalized patients with coronavirus (52% compared to the 40% limit), as well as the occupation of intensive care units with these patients.

Very close in number of deaths in the last hours is the United Kingdom, with 595, up to a total of 50,365 since the beginning of the pandemic and 1.25 million cases, with England in almost total confinement until December 2.

The cumulative incidence in Spain is 514 cases per 100,000 inhabitants and the hospital pressure stands at 16.79%, while 31.78% of ICU beds are occupied by coronavirus patients, the same percentage of the last two days.

Russia is also experiencing a black day by registering 432 deaths, a new daily maximum since the beginning of the pandemic, up to about 31,600 deaths and 1.8 million cases.

Romania exceeds 200 deaths with covid in one day for the first time and, with very distant figures, Portugal also breaks the record for deaths in one day (83), as well as Bosnia (69), Greece (43) and Serbia ( twenty-one).

In Belgium, meanwhile, the rate of deaths is slowing, although they continue to increase, with an average of 190 deaths per day and more than 13,500 since the start of the pandemic.

Faced with this situation, European countries tighten the measures against covid-19: Spain will require a negative PCR for international travelers from risk countries, Greece increases the restriction of movements and implements from Friday the night curfew nationwide and Ukraine, which beats the numbers of infections, decrees quarantines on weekends.

In France, will increase the controls on the confinement in force from October 30 and a relaxation of the restrictions is not foreseen, while in Sweden the sale of alcohol will be banned from 10 p.m. and Slovakia prolongs the state of emergency until after Christmas.

Bulgaria, with the maximum number of cases in a single day since the pandemic began, makes it mandatory to donate plasma to Defense personnel who have passed the coronavirus to treat people now sick, while Albania announces new measures.

All this while waiting for the long-awaited vaccine against covid-19 to arrive, to which the WHO is optimistic, although with moderation, after the great progress achieved. However, he estimates that to guarantee the end of the pandemic, 70% of the world’s population should be immunized.

“As we anticipated, we will have a vaccine at the end of this year, and that of Pfizer is very promising“said the general director of this United Nations agency, Tedros Adhanom Ghebreyesus, referring to the one developed by that American pharmaceutical company and the German firm BioNTech and which appears among the best positioned.

The projects of the American company Moderna are also promising, the one being developed by AstraZeneca with the University of Oxford, three Chinese compounds from Sinopharm and Sinovac, the one carried out by the Belgian pharmaceutical group Janssen, those of the American firm Johnson & Johnson and Novavax or the Russian Sputnik V.

Today the College of Commissioners of the European Commission approved the signing of the contract to purchase 300 million doses of future vaccine from Pfizer-BioNTech, which promise 90% efficiency.

And the United Kingdom intends to start a mass vaccination program from December if the suitability of the compounds against the coronavirus is confirmed.

But lessons are also drawn from the extreme situation that the coronavirus is causing, and thus the European Union (EU) prepares for future pandemics and international health crises.

To this end, Brussels has formulated a proposal towards a European Health Union to “act and support Member States in situations of serious cross-border threats”, improve partner coordination and strengthen the role of European health agencies. It also proposes creating a new authority that can declare a European emergency situation.

As an example of intra-community cooperation is Germany which, with a significant decrease in new infections, cares for patients with coronavirus from neighboring countries (Belgium, Holland and France), as it already did during the first wave of the coronavirus.

Also members of the BRICS group of emerging economies (Brazil, Russia, India, China and South Africa) They proposed today the creation of an early warning system to prevent the spread of infectious diseases such as covid-19.