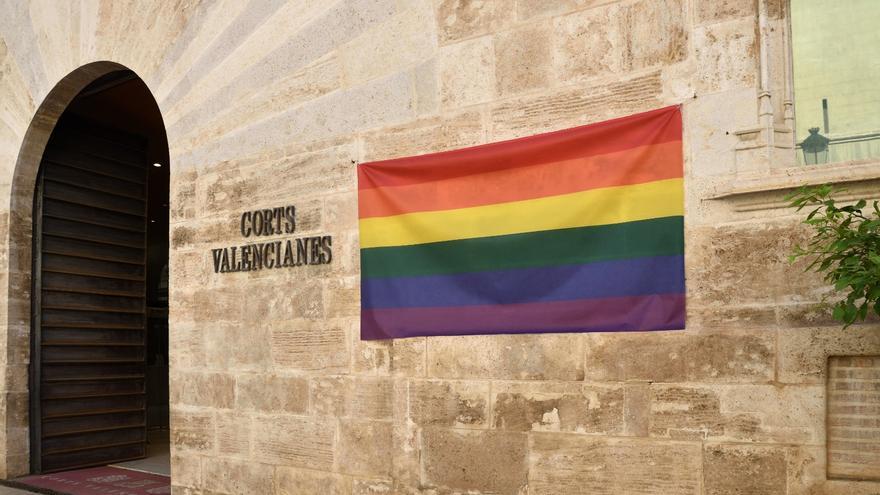 The Valencian Courts have once again shown their commitment to the visibility of the LGTBI collective and this Monday they installed the rainbow flag on the main facade of the Palau dels Borja, on the occasion of International Pride Day.

The emblem of the group has been placed on the façade as a result of an agreement that the Valencian Parliament promised to carry out since June 25, 2015, with the change of government, to support the group and work against discrimination.

After the installation of the flag, Vox has requested its immediate withdrawal by means of a letter addressed to the President of the Cortes, Enric Morera. “The doctrine of the Supreme Court is clear: it is not allowed, under any circumstances, the placement of unofficial flags in public buildings,” underlines its deputy spokesman, José María Llanos.

For their part, the Presidency of the Chamber emphasizes that it is a symbol of the LGTBI movement in compliance with the institutional declaration signed six years ago, as well as that it is installed in the same place as that of other solidarity or international commemorations. They also ensure that the services of the chamber have installed the flag ex officio and “the Presidency has not ordered anything.”

The place where it has been placed, they explain from the presidency of the Chamber, is the same one enabled by other solidarity or international commemorations, such as World Sign Language Day, the fight against cancer, AIDS or the day of the Red Cross.

For her part, the vice president and spokesperson of the Consell, Mónica Oltra, stressed that the Valencian Community “is a land that embraces diversity and shows itself to the world without complexes” because “there are many ways of being and loving and all of them have place in our society “. This was stated during the press conference after the plenary session of the extraordinary Council, in which he made reference to the commemoration on June 28 of the LGTBI Pride Day.

In this sense, Oltra has remarked that “this Government, since 2015, we have implemented an advanced regulatory framework in the line of defending the rights of LGTBI people and against their discrimination.” The vice president insisted that “this impulse has allowed the entire Valencian society as a whole to gain in rights and freedoms, in public protection and recognition of its diversity.”

In this regard, Oltra recalled that, precisely, the Comprehensive Law for the recognition of the right to gender identity and expression of the Valencian Community, known as the Trans Law, was “the first law we began to work on when we reached the Vice-presidency of the Consell “.

The vice president has valued “the broad process of participation” in the preparation of this normative text, which had the collaboration of entities, departments of the Consell with competences, trans people, professionals and all parliamentary groups.

“A great consensus for a great law that has changed the lives of many people who have suffered and continue to suffer severe discrimination in all areas of life,” insisted Oltra.

Ciudadanos (Cs) has called in Les Corts Valencianas for more resources for the prevention and detection of homophobic behaviors in education. Through a Proposition No of Law (NLP), as the deputy of Cs María Quiles has advanced, the liberal group urges the Consell to “promote training resources for the educational community to continue fighting against bullying and language homophobic, to develop a specific protocol of action to prevent, detect and correct homophobic behaviors in educational centers and develop studies to evaluate the effectiveness of the policies implemented, among other issues ”.

“There are still many steps to take to achieve a fully inclusive and egalitarian society in which affective-sexual diversity and different gender identities are fully integrated,” said Quiles, while considering “necessary to promote a better perception and knowledge of this diversity to consolidate an inclusive school model ”.

In this sense, he has defended that “education is the best tool to transmit values ​​in equality and to eradicate or minimize the impact of problems that are underlying in our society such as discrimination based on sexual orientation.” For this reason, the deputy of the liberal formation has explained that currently “there is no specific plan for the treatment of homophobia and sexual and gender diversity in the classrooms”, so “it is urgent and necessary to put it in motion.”