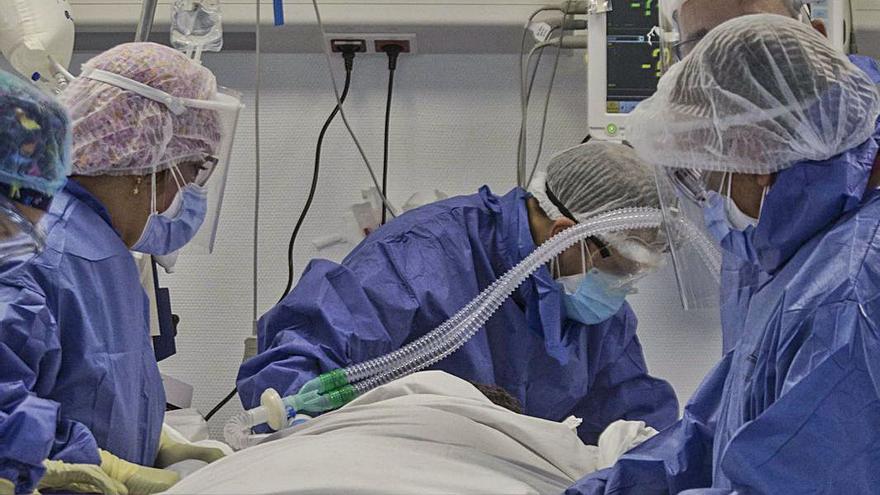 The health crisis caused by the coronavirus has ended up forcing the fragile seams of Health with capital letters, leading the system in general, and health professionals in particular, to a supersaturation from which they see no way out, given the successive progression of one wave after another of infections.

The tip of the iceberg of this critical situation is reflected in a climate of tension that increases attacks on doctors and nurses, more than 400 in the Community this year and one in seven physical, according to data from the Ministry. They come from patients who feel neglected because almost everything is occupied by the covid.

The attempts of health officials to empower and provide new telephone switchboards to health centers still do not alleviate the demand of users, and every other day, professionals are forced to resort to police agents to warn those who They insist on being seen without an appointment, claiming that they have not been answered for days. Users of health centers in Alicante continue to denounce him, and in Vega Baja they have even chosen to install cameras and hire security agents to control the uneasiness of patients.

Similar precariousness is transferred to hospitals, in which the waiting lists have been enlarged with an average of 2,000 more patients suffering delays of up to half a year to be operated. In the province as a whole, some 20,000 people are affected. In addition to this delay in the operating room, the medical professionals themselves, including oncologists, show their concern that mostly elderly and chronic patients have parked the necessary medical control due to the difficulties of contacting the professional and also for fear of the covid. In the medium term, they predict an increase in the severity of the ills and even situations that may be irreversible due to the absence of adequate preventive monitoring to avoid it.

Among the specialties with the longest delay are Traumatology and Pediatrics, which exceed half a year of waiting for interventions.

Patients in queue to access a health center in Alicante. HÉCTOR FUENTES

This work overload further exacerbates, if possible, the fragility of a health system that the covid has turned into a pressure cooker, overwhelmed by the two aforementioned fronts: neglected patients and oversaturated professionals who are given no truce even on vacation.

The Ministry has once again extended this week the exceptional measures for all personnel in the sector that, depending on the evolution of the pandemic, must be available and forget about any type of permits, if necessary, and even go on to reinforce the services that require it at any given time “as long as the virus continues among us,” as the minister herself, Ana Barceló, emphasizes.

At the gates, therefore, of a new holiday bridge, and of the dates par excellence for social and family gatherings for Christmas and Kings, the consequences of the pandemic show that in the Department of Health the situation continues to be saved on time, to cost of mainly human resources for which historically a greater endowment has been demanded.

The regional representative of the approximately 10,000 Nursing professionals in the province, Juan José Tirado, 2,200 nurses urgently to reach the country’s average which is 560 per 100,000 inhabitants, compared to 512 in the Community. This summer he warned that it works “at an emergency”, and the situation has been stressed to the point that the extra efforts and endowments made by the Health Minister continue to be insufficient.

It is no small thing to increase the workforce of health workers in the province with 2,000 new contracts to combat the covid, 12.5% ​​more, but the representatives of the sector consider it a “patch” forced by the exceptional situation, which by no means solves the deficit of toilets that they place between 25% and 30%, according to the CESM and CC OO for a staff of around 16,000 people in the ten hospitals in the province and all the health centers. According to these estimates, the lack of toilets would exceed 4,000 troops in the province.

The president of the Society of Family Physicians abounds that in the consultations they drag both the lack of templates and technological means, as well as an excess of bureaucracy “when what we want is to be doctors,” she points out.

But neither the planned competitions, which should stabilize and improve the employment situation of more than 13,000 health workers in the Community, are not going at the rate demanded by the sector. This same week the offer has been increased with 1,500 more places, but it is estimated that the calls will last for years and at the moment only specialties have been launched with few places and are running out. This is one of the causes that leads newly trained doctors to prefer other countries and autonomies where they are better paid -in Murcia without going any further-, and they obtain from the beginning the job stability that is stolen from them here, as highlighted by the dean of Medicine at the Miguel Hernández University, Antonio Compañ. “Faced with so much insecurity, and also trained in languages, they do not hesitate to leave, Europe is no longer a foreigner for them,” he says.

The latest data collected by the Collegiate Medical Organization indicates that more than 300 of these professionals leave the Community a year, with less than 35 years the vast majority and whose preferred destinations are the United Kingdom, France, Ireland, Italy and Germany.

The president of the medical group in the province, Isabel Moya, agrees with the president of Community Nursing, José Ramón Martínez Riera, that the health disinvestment that the Community is dragging has been especially evident with the pandemic. «He has caught us in diapers due to job insecurity and the obsolescence of the media, in addition to highlighting the politicized health management, which must be professionalized, ”Moya emphasizes. Martínez Riera adds that the covid has made it clear that Public Health does not fulfill the functions it should and has shattered the Nursing sector due to the progressive degeneration of primary care towards medicalization. «The pandemic has left everything in the open in a stark way and coordination and humanization have suffered. The system has been shown to be out of date, “he concludes.