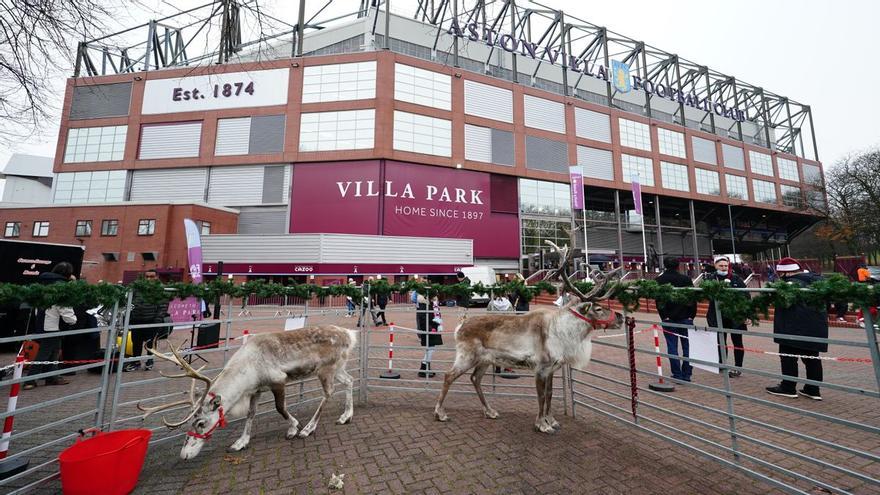 Although Spanish football is unchecked and stops next weekend, Christmas is a high point in many sports competitions around the world. The NBA schedules some of his best games for those dates, and in the Premier League el Boxing Day It is a designated day on the calendar. But the threat of covid, and in particular the vertiginous expansion of the omicron variant, has put all those plans in check. The positives do not stop growing, the suspended games accumulate and it is not at all clear that taking the children to see a game is going to be a possible gift these days.

The Premier League meets this Monday urgently to make a decision after Aston Villa-Burnley became this Saturday the sixth game suspended of the day due to the scourge of the covid. In a week, 10 meetings have been postponed. Manchester United was seen on Wednesday with only seven players available (for positives and injuries). Liverpool will play this Sunday, but without Van Dijk, Fabinho and Jones, and Chelsea will do so without Lukaku. The situation in the Championship (the English second division) is not better: the 5 matches this Saturday have been postponed, and there are already 24 this season.

It doesn’t seem like a matter of bad luck. It is estimated that only 68% of Premier League footballers have received the full schedule of the Premier League. vaccine, by 90% in the League or 98% in the Serie A. Richard Masters, the ‘Tebas’ of the Premier, has urged reluctant players to get vaccinated to finish the season, although they are already late to save Christmas . This Monday they will discuss a possible suspension, a few days before Boxing Day (December 26), but the technicians also ask for clarity about when a game should be postponed or not.

“When you start losing players to COVID, the competition becomes a bit unfair. I don’t think anyone wants to see that,” Newcastle coach Eddie Howe warns. Jügen Klopp is not against stopping, but he is not sure: “I don’t see the usefulness of it at all. Do we stop for a week, two? When do we play those five or six games?”, Asks the Liverpool manager. “We need clarity”, ditch Mikel Arteta, Arsenal manager.

Boxing Day is in danger, but also the NBA Christmas games. Despite having 97% of the players vaccinated, 60% with the third dose, the situation seems out of control in the North American basketball league. Since the start of the season, more than 80 players have entered the NBA’s health protocols, but the explosion has occurred in recent days: up to 54 this Saturday among all franchises, including the MVP of the last final, Giannis Antetokoumpo. The Bulls in particular suffered a devastating outbreak that left them without 10 of their troops, forcing them to postpone their games.

The NBA had scheduled a stellar duel between the Lakers and Nets for the 25th. Lebron, Davis and Westbrook vs. Durant, Harden and Irving. But the covid does not understand plans or the Christmas spirit. Westbrook has been the last to test positive, and how will the situation be that the Angelenos have signed a 10-day contract to Isaiah Thomas, who was without a team, to face the next commitments. In Brooklyn, Harden is confined and they are considering going back to Irving, who has not made his debut this season after rejecting the vaccine. If it did, it would not be able to play the games at home, as New York bars access to stadiums to the unvaccinated.

The NFL and NHL, affected

Another of the pillars of American sport, NFL, also faces a complicated Christmas. This weekend I already know they have suspended three games, including those of the Cleveland Browns, which have a score of casualties due to covid. Precisely the Ohio team has a duel scheduled on Christmas Day against the Green Bay Packers that, to this day, is not guaranteed to celebrate. In the NHL, the hockey league, 10 games have already been suspended.

The players’ unions denounce that the protocols had been relaxed in recent months and fewer tests were carried out. In that sense, the spanish soccer league will present a new protocol to address this new wave. Cup matches in lower team pitches had already pushed some teams to regain the habit of changing and showering in the hotel, for example.

Neither the League nor the ACB will play matches at Christmas, but the Copa del Rey will be played around Three Kings Day (January 4, 5 and 6). The other great Christmas sporting event in Spain will be the basketball classic on January 2, which is still standing but forces you to stay alert. The Barça, that has the positive of Hayes, saw how his duel of this weekend against him was suspended Baxi Manresa due to the seven positive cases detected in its rival, while Madrid suffers the contagion of its coach, Pablo Laso, and its base, Thomas Heurtel, who added to those of the soccer team (Modric, Marcelo, Asensio, Rodrygo, Bale and Lunin) forced extreme precautions in Valdebebas to avoid a nightmare before Christmas.