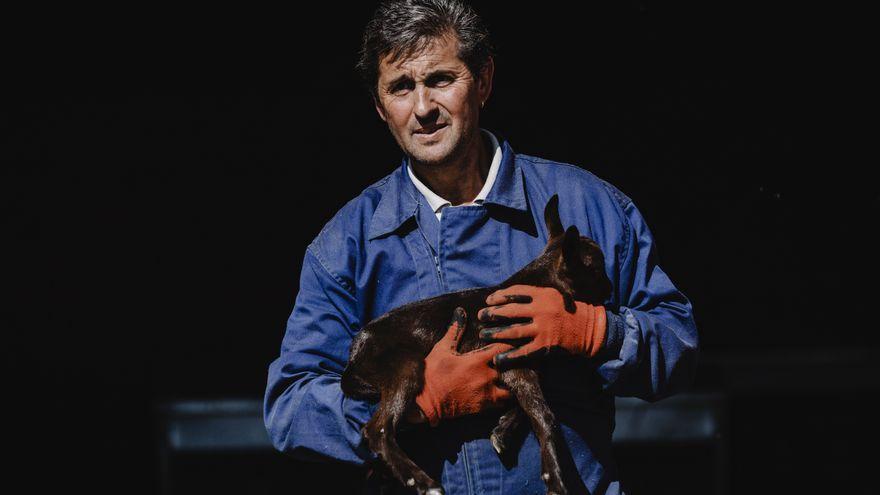 “Take a little bit for that corner because this is going to be like San Fermín.” And in that the farmer Alfredo Martín, robust bearing, firm hands from so much milking and a golden earring with a wide hoop on his left ear, like a pirate’s, opens the door of the ship and dozens of black and mahogany goats stampede their way of the mangers. The group stretches to arreones, like the big peloton in the last kilometer of the Champs Elysees stage.

They are of the Murcian-Granada race, much more productive than the Serrana, the typical one of this mountainous area of ​​Ávila -San Bartolomé de Pinares, near the Alberche river plain, is 1,047 meters high-, the one that their father had when she began to shepherd with him when she was only 13 years old. An inherited profession that for now has no transfer to your child.

“The cattle raising this area ends with me, I’m afraid. I am the youngest. I am 53 years old “, Alfredo guesses as he distributes cereal feed from a bucket (oats, barley, pulp, corn …) through the feeders of the annexed warehouse.

He does not say it just because.

The commodities crisis is not only staggering big industry, but has thrown agriculture and livestock professionals back on the precipice. “As the situation is, because I do grazing, if not this stabled livestock could not maintain it,” he says about his exploitation, of about 800 goats, 250 of them goats.

“If I did not graze this livestock, I would not be able to maintain it”

Every afternoon, around five o’clock, now that the temperatures are still good, Alfredo goes out to the nearby slopes where part of his livestock grazes. About three hours. He is accompanied by three mastiffs, two border collie and Alejo, a cat shepherd without any shame that he is capable of walking so wide “six kilometers” next to his master and that he delights the followers of his Facebook profile: “Damn, my daughter told me to open it …; I took the cat out, and it’s what people like the most. ”

If he did not take out these 300 goats to graze, the production goats, the ones that give him the most milk, the accounts would not come out: “I would have to put other three packets of fodder a day, about 150 euros more“.

The business maintains itself by measuring every detail, every expense very well, but it has colleagues who are doing worse. “Some have to sacrifice the kids as they are born, because it is more expensive to keep them with the nurse (the machine through which they are given part of their feeding with artificial milk) than what they are then given for them.”

The kid, which is usually slaughtered at 40 days and weighing about ten kilos when suckling, is paid this week between 4.65 euros and 5.06 per kilo, according to the Albacete fish market, one of the reference markets in the agricultural sector. “They have come to pay 3.70 …”, Alfredo recalls as he shakes his head and explains that, although he loses money raising the lambs -the final price of the animal does not compensate for the reduction in the mother’s milk production- , to the he does not know what to sacrifice so soon. “The farm is supported by milk, not meat.”

Alfredo Martín opens the door of the ship so that his goats come in to eat. Alba Vigaray

The anger is greater when they observe day after day that one thing is the price that intermediaries give them for the animal and quite another. the price that the consumer is. “Well, didn’t my sister go and tell me the other day that she bought some suckling pig chops at a butcher shop in her neighborhood at 27 euros per kilo? stop climbing “.

He does not say it just because.

According to the National Institute of Statistics (INE), the electricity bill has risen 44% in one year, while the price of gasoline and diesel rose between 22 and 23%. To that is added the increased cost of cereals necessary for the production of animal feed.

Faced with this perfect storm of raw materials, which is the last straw for many businesses, the sector is considering mobilizing. “It is a very complicated situation; the price rises are terrible “, says Lorenzo Ramos, president of the Union of Small Farmers and Ranchers (UPA).

“In dairy and meat farming the situation is tremendous. Every day an average of two farms are closing. Many farmers are charging the milk below cost”, denounces Pedro Barato, president of the Agrarian Association of Young Farmers (Asaja) . “Some products are at risk of becoming scarce. It is not viable to stay and we could depend on the foreigner “, warns Cheap.

Many farmers are charging less than cost for milk

For now Alfredo holds on. His cooperative, made up of some 120 farms in the area and based in El Barraco, works for the Entrepinares dairy factory in Valladolid, which makes cheeses, among other products, for the supermarket giant Mercadona. They pay him 86 cents per liter (he produces about 500 a day). “The price is good, but it is for the quality of the milk, be careful“He warns, puffing out his chest.” Others are paid 60. ”

Margins are still very tight. “I think there are 7,000 euros a month, about 3,500 forage, 500 or 600 diesel fuel, before the rise we paid much less … the feed of the mastiffs, their civil liability insurance …”, Alfredo lists while We go through the farm, where the animals are housed separated by their characteristics (production, rearing, replacement, pregnant, stallions …). His cat is not separated from him. The smell inside the ships is dense, penetrating; even at some point it smells like chemicals, the fruit, explains Alfredo, of the urine that is stored for days inside.

“That is the expenses without counting that later there is 20% of the cattle that you leave, due to diseases and others. Every year between 120 and 150 goats have to be replaced“, explains the rancher, who still reports that goat farms are now much more viable than beef farms.

This is confirmed by the latest Milk Chain Value Study, published by the Ministry of Agriculture, Fisheries and Food, which collects data from 2018 to the first half of 2020. According to the report, beef farmers are selling their milk below your production costs: they receive an average of 33 cents per liter per year when the average cost of production is 35.6.

“Prices increase but the farmer continues to buy milk at the same or cheaper price”, denounces Lorenzo Ramos (UPA), who sees incomprehensible that in other sectors, such as construction, production costs are passed on and in his own no. In that sense, remember that since the beginning of last year it is mandatory that “no one can pay under of what it costs to produce “, something that, however, the dairy industries are not respecting.

Specifically, and pending the approval of the Food Chain Law, which is already in the Senate for its final ratification, in February 2020 the Government approved a Royal Decree that established that each link in the agri-food chain had to pay to the immediately preceding operator a price that at least covers the cost of production. Something that is not happening.

The rancher Alfredo Martín poses with one of his goats. Alba Vigaray

“The dairy industries refuse to raise the price of the farmers because the competition tells them that they are agreeing. With this issue we have a tremendous fight. If now it costs 35 cents to produce a liter of milkFor example, they should pay us, right? “protests Ramos with the reason given not to say anything foolish.

In parallel, in the case of agriculture, he warns, “There are no” producers that can support the rise in fertilizers, which have grown between 50 and 70%, or fuels, at the same time. “with increases of 30 and 40%”.

“The cost of production is taking us ahead,” says the president of UPA, who asks for more controls and inspections so that the Decree Law of 2020 is complied with. “Speculation is not controlled and there is a lot of intermediaries playing to make products more expensive.”

In the same vein, the president of Asaja states, Peter Cheap, which demands “more inspectors” to control compliance with the Law and again asks the Government that farms do not pay the term energy quota throughout the year, which can cost in some cases about 10,000 euros, but only in times when it is necessary to water. “The farmer they should be able to disconnect from the network when they don’t and thus not pay when they don’t use it. “

Manuel M. has a large beet farm in Arévalo (Valladolid). Only in the past month, due to the rise in energy, he had to pay 3,300 euros for electricity from the generator that allows him to irrigate when the most he had paid since the year 2000 when he did the drilling was 1,600. “And then we watered what we wanted,” he remembers, “many more hectares than now.”

“With the price of electricity like this, for next year I’m not going to plant beets anymore, and that I take out 140,000 kilos, that no one takes that around here “, argues the farmer. “It is better to be standing. We do not take out for the light.”

Not even the rise in cereal that the sector is experiencing affects farmers who are dedicated to it, since the rise in fertilizers and diesel takes all the margin. “In the end, the benefit is as small as in previous years,” says Juan Carlos C., who is these days planting wheat in a field surrounded by plots without the soil removed “because there are fewer and fewer people who work the land; it is no longer profitable. ”