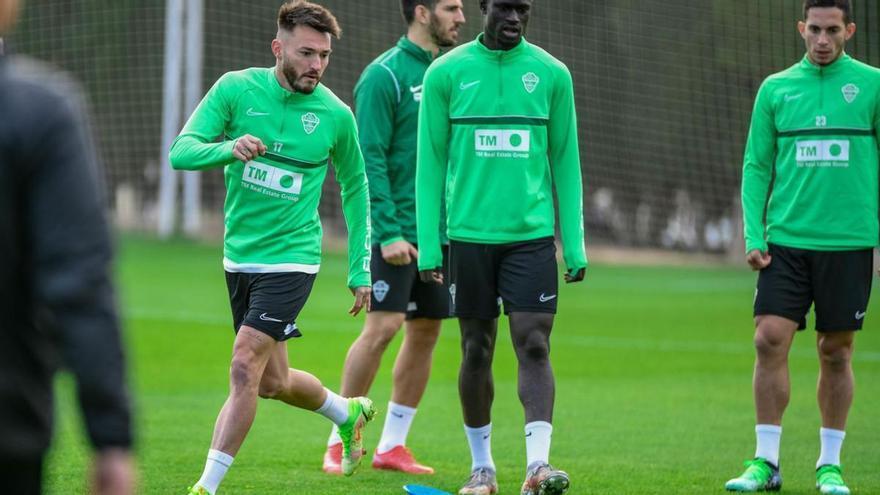 Elche faces this afternoon (8 pm), at the Juegos del Mediterráneo stadium in Almería, the round of 32 match of the Copa del Rey. A match that the Elche team faces thinking more about the important League clash next Monday (9 pm), in Cornellà-El Prat, against Espanyol.

Despite this, the recovery of players who could not be against Granada last Sunday due to covid positives, such as Lucas Boyé, Iván Marcone, Raúl Guti and Benedetto, allows them to face the tie with different perspectives, because Francisco has enough cash to form an eleven of guarantees in the next two stakes.

The franjiverde coach will give rest to starting footballers in the League such as Mascarell, Mojica, Gumbau, Helibelton Palacios, Tete Morente, Pedro Bigas or Edgar Badia, with the aim that they arrive fresh on Monday. At the same time, he will take advantage of the meeting in Almeria so that other players can take minutes and rhythm of competition after being absent or having few opportunities in recent weeks.

Francisco will not give the call until today before traveling. In principle, the only casualty will be that of goalkeeper Kiko Casilla, who was called to be a starter in the Cup, but who was ruled out yesterday by the coach because “he is not yet one hundred percent” recovered from his ankle injury. This situation opens the doors of ownership to Argentine Axel Werner, who will make his debut with Elche at the Juegos del Mediterráneo stadium.

Fidel and Diego González, who will not be able to play against Espanyol due to suspension, will also have minutes, when they were two other players called to rest.

Also Read  Latvia: Modernism and myths in Riga | The traveler

Francisco will take three homegrown players: Jony Álamo, John Chetauya and the forward of the subsidiary Cheih Diamanka Senghor. Despite this, except for surprise, initially, they will be on the bench, although they could have their chance in the second half.

The starting eleven could be made up of Axel Werner in goal, Barragán, Gonzalo Verdú, Diego González and Josema, in defense. Marcone and Guti, who return after overcoming the covid, in the double pivot; with Josan and Piatti in the bands. Up front, Pere Milla and Guido Carrillo could start initially and Benedetto have minutes in the second half. Lucas Boyé, who is available again, has many options not to travel thinking about Espanyol.

Francisco will return today to his native Almería as a rival. The Elche coach was trained and stood out as a player, being his highest historical scorer in the Second Division, in the Almeria team, in which he also made his debut as a coach, at just 35 years old, becoming in 2013 the youngest coach in the First Division .

In addition, Francisco eliminated “his” Almería as coach of Girona in the promotion play-off of the last two seasons. Last season he won the game against Rubí, the current coach of the Andalusian team.

Today’s game has many special connotations, which have lost a certain “curiosity” due to the situation of the two teams in the League. The franjiverdes thinking more about permanence and the rojiblancos, leaders of the Second Division, with promotion as the only objective.

Also Read  Budgets and + there - Information

«It is always nice to come back. It is true that I have been working abroad for many years, but it is the club where I was formed, where I played, where I began to train and there I have my house, my people and my family. In another situation it would be a prettier and more special match, but we are going with the intention of passing the tie “, commented yesterday the Elche coach, who did not hesitate to praise his rival. “It is the best team in the Second Division, by planning, coach and this season it is more balanced in all phases of the game, as it is showing. It is closer to a First team and we will have to compete to the maximum to win.

The people of Almería won the last two qualifying rounds

Elche and Almería have met on several occasions in the Copa del Rey. The last two qualifiers fell on the Andalusian side. In the season 11-20-2012, the Almeria won 1-0 with a goal from Soriano. The last cupbearer confrontation dates from the 2015.2016 campaign. Regulatory time ended with a tie at two, the extension with a tie at three and in the penalty shoot-out, Almería won. Rubí’s team has reached the round of 32 after eliminating Águilas on penalties and Amorebieta in the previous round.