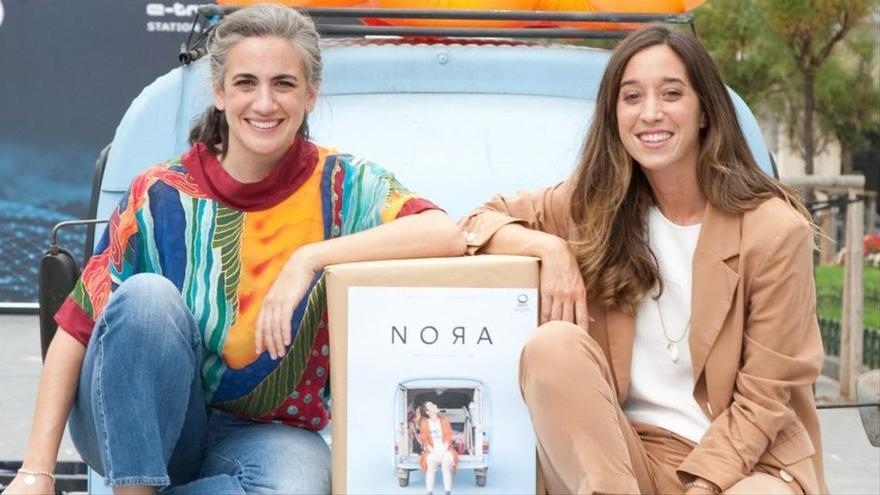 The Basque cinema is going through a hopeful moment in which films like Handia, Ane or Akelarre find their place on the billboard and even win awards. The latest filmmaker to join this select group is Lara Izagirre (An autumn without Berlin) who has just released his second feature film, Nora, which was successfully shown at the Miami and San Sebastián festivals. It is starring Ane Pikaza (seen in Vitoria, March 3 and El doble más quince), accompanied by two secondary veterans (Klara Badiola and Ramón Barea), the television Itziar Ituño (La casa de papel) and the special collaboration of a film and theater great as Héctor Alterio.

The film follows in the footsteps of Nora, a thirty-year-old in crisis after not getting the job she longed for, a family event and not having gotten over her break with her partner. This situation leads her to take a trip aboard a beat-up car even though she doesn’t even know how to drive. During her itinerary she will meet a series of characters, she will learn to know herself and make important decisions for her future. It is a female portrait in the form of a road movie (road film) that stands out for the sensitivity with which it treats its protagonist, the beautiful landscapes it crosses and the apparent simplicity of its staging. Its director explains the details of the shooting of this film.

-Less is more. “It is shot in 4/3 square format because I like it a lot. It helps me to tell the stories of the characters, as it is more square it helps to better frame people and landscapes and it allowed me to always be on top of Nora ”.

The crew did not expect good weather throughout the shoot. A CONTRACORRIENTE FILMS

-Don’t work with children … “The boy didn’t want to do the opening scene because He did not tolerate us saying he had poop, We told him that it was his sister who had this problem. Naiara Carmona, the actress who plays her mother, played coach of the little ones and was in charge of creating that energy they have. The sequence in the tent was very difficult because there were many people and we could not fit. The children had to sing and make them fight and we had to cut many times so that the adults could get out of the tent and breathe. They are not like professional actors who jump in and out of character in a second, they have to be in a situation, they don’t pretend. To motivate them I invented a game of points, I was the judge and depending on how they behaved I gave them more or less And, in the end, I gave them a 100,000 point bonus and they were very happy. This trick was very good for me to stimulate them ”.

-Nor with animals. “When we were going to shoot the scene with the donkeys started having sex with each other and we were dying of laughter. We just wanted to do some shots in which Ane gave them some apples and we had to wait a long time. With sheep, the surprise was that they did not beee. We recorded the sound and they were a bit stressed, their sound was like choking breath, like an anxiety attack, like distressed. Then, when Ane scared them away, they were happy. ”

The car became another protagonist of the film. A CONTRACORRIENTE FILMS

-My cousins’ car. “My mother’s cousins ​​have a Citroen dealership and the whole family has their cars, I have always known all the models. As a figure that is a legacy car I wanted to shoot the movie with a brown Visa, like my mother’s, which is ugly but has its charm. But the cinematographer told me that it had to be bigger to fit the camera and we decided to do it with a Dyane. My cousins ​​looked it up on the internet and They found an offer when we still had no financing. It was the first acquisition of the project ”.

-Tuning the Dyane. “It has a very particular noise, it turns very well and it takes the bumps. It was white and we painted it, it had no windows and we made them, we took out the rear ones and we put the back seats. But the instructions were real, they came with the car. The phrase about the oil change is part of them and I included it in the script. She was the diva of the movie. In the scene where Nora has to get it going It was true that the car did not work, it cost us, and when she finally gets it started, it’s really, it was a rush … Then she didn’t give us any more problems, we took it to the previews, to the San Sebastian festival and as Ane became her best host, she took it and we went on a spree with him, it was really cool ”.

The director was able to fulfill her dream of working with the legendary Héctor Alterio. A CONTRACORRIENTE FILMS

-Working with a legend. “I’m not a fan of almost anyone but I have always been a fan of Hector Alterio which, for me, was somewhere else. His character was going to be Basque first, then Mexican and, already put, that I was Argentine and I tried to fulfill my dream. We found out that he lived in Madrid and we succeeded. When he got to rehearsals and I saw him get out of the car it was one of the most special moments of my life. He was then 89 years old and his job as an actor showed. He stands out for his incredible humility, now he works very little and chooses his projects a lot. When I am his age I will be able to count it as a very important experience in my career, to be able to say that I worked with him. I will rarely experience something like this. It was impressive and very beautiful, it is a love. Ane said that she couldn’t imagine someone better to play her grandfather. He is an incredible human being. ”

-Memorizing an unreleased song. “I fondly remember filming the concert at the Talako bar. The singer Izaro had composed the lyrics for the song and we did not want to publish it before the presentation of the film. But she wanted people to sing it with her to make it sound like a popular summer song. The extras received the letter at home and had to learn it. Before filming we played it several times so that they would know it. It was very funny, you saw them singing in small groups, some out of tune, but it was beautiful, it was like a mantra ”.

-From Lara to Nora. “To find the locations I went like Nora, driving and looking at everything. I saw the stones at the back of the Caserío de Marisel and I did the same route as Nora in the movie, I found it because you don’t see it until you pass the curve. I went out like crazy because it was perfect for what I needed. I turned around, looked around and everything was beautiful ”.

-The magic library. “Making the casting In Hendaye to find the actor who should play Ximun, one day I was tired and stayed in the apartment we had rented, while Ane and Naiara went out to buy dinner. When they arrived they told me They had found a bookstore that was ideal for the movie. Also, it was a travel bookstore, something I didn’t even know existed, and it was very magical. Among, I met Catherine, the bookseller, I asked her if she dared to appear in the film and she ended up being one more character. I am very fond of bookstores and could not even imagine it, and in such a wonderful environment … I would stay there to live ”.

The chance discovery of the bookstore was magical for the director. A CONTRACORRIENTE FILMS

-Wetting the protagonist. “The hostage that Ane receives was one of the most difficult scenes because it was like an anxiety attack and getting the actress wet is always a problem, you had to dry her between takes, change her clothes, maintain continuity and it was a tragicomic situation. It was the most feared by Ane and by me, but luckily we had Itziar Ituño who came very prepared for the role and it was like the pillar that made Ane confident enough to do it and that it would work in the movie. We rehearsed it several times without water, but the first time it happened it was incredible, the whole team was waiting and it had a lot of truth. The second you know the temperature, what is going to happen and there is less surprise and, finally, the one that is mounted is the first take”.

-The unforeseen fall. “In the paddle surf scene, a family comes out that overtakes her and it took us a lot to shoot her, Ane fell down, she got her hair wet and we had to dry it, we rolled from another boat and, sometimes, it got out of square and the family went back and forth and they did it super well. Suddenly we had the ideal shot, we had achieved it, a perfect frame, a wonderful general shot and the mother, who is very expert, fell. She said she couldn’t believe it, that she hadn’t fallen in years and felt very guilty for having screwed up the shot. We liked the board we chose a lot because of its colors, but it was too big for the fall to fit well, it looked like a lie, and riding from the boat was difficult. At the end in that sequence three falls are mounted because there was no way it would look good. It was a very magical day because there was no one, we were alone, the weather was good, there was a lot of silence, you could hear the little birds. All of this led to a festive atmosphere, almost at the end of the shoot, and that day was a gift. ”

The film crew in a photograph during filming. GARIZA FILMS