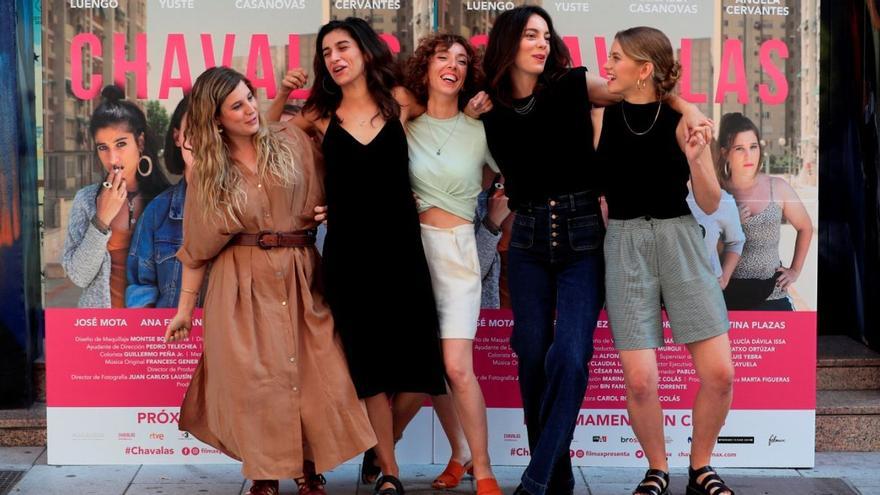 It is stimulating to see how, in recent years, new Catalan film directors have appeared who bring their talents to this art. The last to arrive is Carol Rodríguez Colás, who has just premiered her debut film, an eulogy from the suburbs entitled ‘Chavalas’, written by his sister Marina and based on the experiences of both. Is a Youth Drama Comedy Serving Four Excellent Actresses headed by the splendid Vicky Luengo (‘Riot gear’), but also with the presence of Elisabet Casanovas (‘Merlí’), Carolina Yuste (‘The cover’) and Ángela Cervantes (‘Com si fos ahir’), as well as veterans José Mota and Cristina Plazas.

The protagonist is Marta, a girl who aspires to succeed as a photographer and lives in an artistic and intellectual environment in Barcelona. But she loses her job and is forced to return, against her will, to her hometown in Cornellà. There she will meet up with her old friends, her parents and neighbors. He denies his past but has no choice but to return to it. However, in that place she will have to find herself and find her own way. It is a tender movie, which talk about not being ashamed of the origins and that it excites in many moments. A fresh, very spontaneous and credible film that is seen with pleasure and sympathy. These qualities led her to win several awards at the Malaga Festival. Its director explains the anecdotes of the filming.

-Very personal. “I am still young and he does not give me life to make an autobiography, but the film has many personal things: my neighborhood, the building where I grew up or the name of my pet, Hare, a turtle that died and was named after my father. Marta’s (Vicky Luengo) conversations with her parents are also very similar to ours. My sister, scriptwriter of the film and I, We have made a journey like that of the protagonist, from class shame to peripheral pride”.

-Previous work. “Before filming, the four protagonists had a week of rehearsals but, previously, there was much left between them to understand each other. Vicky and Carolina live in Madrid and they also saw each other before. They knew perfectly well that the essence was the chemistry between them and They went to great lengths to bond and are close friends today”.

They were looking for a representative apartment for someone who loves the phrases of Mr. Wonderful. FILMAX

-A Wonderful apartment. “We wanted the decoration of the girls’ flat to be representative of someone who loves the phrases of Mr. Wonderful, It has that naive point. But, at the same time, Bea is an intelligent woman, with an important professional career, there was that contrast and that she lived in an apartment in Cornellà, inherited from her grandparents, and with doors from the 90s ”.

-Apprentice photographer. “Vicky did not have to learn notions of photography for her character, but she was helped by Lourdes Basolí, who is the author of the photos that are displayed at the end. He came several times to the set and taught him how to take the camera and shoot so that it would be credible ”.

The film’s photographer taught Vicky Luendo how to use the camera. FILMAX

-A real bar. “The building where the Boquerón bar is located exists, but it is not called like that, It is the Peña Castilla-La Mancha. If someone wants to visit it, let them know that it is located there ”.

-A post-pandemic banquet. “The wedding banquet scene was shot after the pandemic. The first part of the shoot was from March 1 to 13 and we had to interrupt it due to confinement. Four months later we resumed it, in June, and I ran into the problem that I could not shoot with extras and the protagonist in the same take, so there was no choice but to play with the plane and the counter plane. It also affected the scene of Vicky and Carolina with the boy on the mattress, in which they had to have a threesome but, like they had to keep a safe distance We change it and that’s when Vicky hits him with the broom ”.

The film was shot in Cornellà itself and some of its neighbors appear in various scenes. FILMAX

-A happy neighborhood. “The neighbors were super happy that we were filming there. I missed them a bit, although the square is quite cinematic and has appeared in other films, but they were happy that there was a shoot in Cornellà and that it explained positive things about the neighborhood. The first scene we did was the one where the girls are sitting on the bench looking at the windows and It is exactly the block where we grew up. They also participated in the scene in which they display photos, they were all neighbors of the neighborhood, even the mother of a friend of mine from high school ”.

-Some spaghetti for laughter. “The name of gourmet gazpacho is very typical of my father. The actor who plays him, Mario Zorrilla, came from The secret of Puente Viejo and he’s not very used to comedy and when he saw the shot in which he ate a plate of spaghetti sack, he broke into a fit of laughter”.

Actor Mario Zorrilla had a fit of laughter when he saw himself eating a plate of spaghetti. FILMAX

-The protective sky. “I wanted to show the contrast between two worlds. When Marta is in her neighborhood you can hardly see the air because she she feels imprisoned, the background is the characters. When he is in Barcelona he feels freer, he is more cosmopolitan, he wanted the sky to be seen because that’s where he can breathe. A good example is the sequence where the publicist is interviewed, that we shot in a hotel right next to the Born and that, in the shots where Vicky appears, the Hospital de Sant Pau is seen in the background and, in the reverse shot, the towers of the Vila Olímpica ”.

-An impromptu party. “At the party with the boys and the drunkenness at the bar there are many improvised moments, phrases that the actors and actresses put in. We guide a bit as it would go but there are things that they improvised. Also in the scene of the farewell in Born they contributed a lot, what they are singing or the phrases they say “.

The protagonists improvised some of the phrases of the scene that takes place in Born. FILMAX

-Extreme in Catalan. “The only one of the four actresses who is not Catalan, Carolina Yuste (she is from Extremadura), is the only one who says a phrase in Catalan. But there was no problem because it is very versatile, it does the accents very well and it did it the first time”.

-Dance without music. “In the scene where they dance I want to have your presence Social Security, there was a marked choreography and we rehearsed it a lot. But the problem was that They had to know the song by heart since we couldn’t put it in the background to avoid sound problems. They sang it all at once until the moment when Marta came in, where we could stop ”.

The actresses had to sing and dance to the Social Security song without having the music reference. FILMAX

-A timely break. “The scene in which Marta has to cry was very important to Vicky and was planned for the Saturday in which they decreed confinement. I was very worried because it was vital and he saw a lot of tension in the team. Due to the stoppage we scheduled it for June and it was already in better condition. He had to concentrate a lot, but he did it wonderfully, She is a very good actress ”.

-Poetic balloons. “The balloon scene was a tribute to Soraya’s great passion for birds. We did it like this because it was more beautiful to make it real than adding some digital birds false and it was very easy because it was solved in just two takes ”.

-Playing with the lights. “We we spent the afternoons on the bench that appears in the movie. The window of our house overlooked that square, my mother watched us and let us know when it was time for dinner. The game of guessing the lights on which floors to turn off is an invention of the script, we never play that, but we do They mention the 7th 4th, which is where we lived”.

The bank that appears in the film is the same one in which the director and her sister spent their youth. FILMAX