At the end of May, when the Government and the autonomous communities planned to return to the classrooms in September, the fifth wave was not intuited, and the delta variant of the coronavirus was still a diffuse threat whose scope was not clear. With a month to go to school, the outlook has changed and the epidemiological situation, aggravated by a more contagious pathogen, raises questions about whether the measures – which do not include reducing the number of students in classrooms – are sufficient.

At the moment, the autonomies still do not contemplate modifying the security guidelines that they approved in spring, as confirmed to EL PAÍS. Then the former Minister of Education, Isabel Celaá, and the Minister of Health, Carolina Darias, met for the last time with the regional councilors of both branches and agreed that the classrooms would once again have the same students as in the pre-pandemic era: up to 25 in infantile (last year they were 20) and 30 in primary school (they were 25 until last June). In addition, it was agreed to maintain the bubble group formula so that students cannot mix with classmates from other classes.

The approved document contemplates a distance in class of 1.2 meters between high school students (instead of 1.5 meters last year), a measure requested by the autonomies to guarantee full attendance and at the same time reduce costs in hiring extra teaching staff. For the 2021/2022 academic year, it was decreed that both the students and the teachers will continue to wear masks, the ventilation of the classrooms will be maintained and both the access and the exit as well as the dining room and recess will be organized in different shifts to avoid interactions. 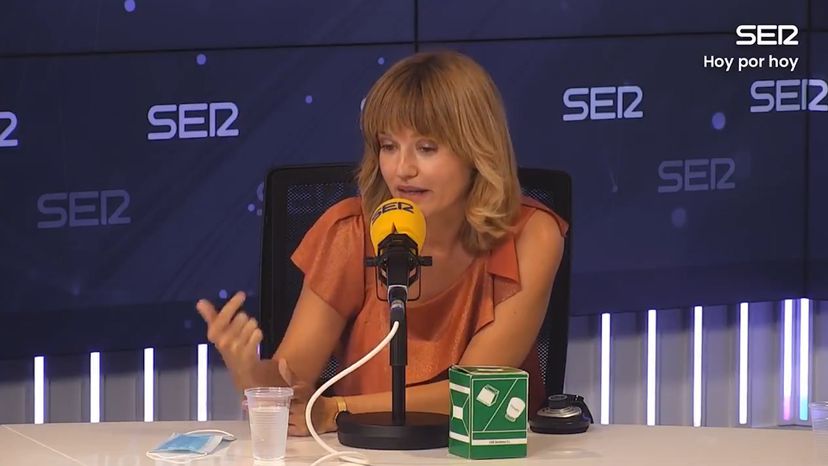 Statements by the Minister of Education and Vocational Training, Pilar Alegría, in the program ‘Hoy por Hoy’ of the SER chain, this Monday.

Will this be enough? The experts consulted disagree. What opens in September is uncharted territory. It was also last year, but the characteristics are now different: the experience of the fall of 2020 cannot be replicated in 2021. At that time it was not known what could happen when regrouping children in classrooms after months at home. The operation went much better than most expected. The result was a success that few countries were able to carry out: the course continued uninterruptedly face-to-face – except for specific closings – and the classrooms did not become vectors of propagation.

In September, it is foreseeable that the majority of adolescents will return to classrooms with at least one dose of the vaccine against covid. If everything goes as expected, throughout the first weeks of the month they will complete the pattern. For those under 12, who represent 11% of the population, however, there is no injection that has been approved by the European Medicines Agency. They will be the large age group left unimmunized, while the vast majority of older generations will have received protection.

Will the little ones become the reservoir of the virus? Will they star in a sixth wave like the youngsters did with the fifth? So far it has been proven that in the vast majority of cases children are infected very mildly or asymptomatically and that their ability to spread the virus is less than that of adults. But with the delta variant and being the only ones unvaccinated, few epidemiologists dare to make blunt statements about what will happen.

Manuel Franco, spokesman for the Spanish Society of Public Health, confirms this uncertainty: “We did not expect this fifth wave so violent. We don’t know for sure if kids can push a new wave from the bottom up [en edad], although last year it was not like that ”. In his opinion, going back to the ratios of the prepandemic classrooms is a mistake: “The delta variant is much more contagious, let’s see if we are doing it the other way around and now we would have to reduce even more.”

The number of children per classroom is less important by Quique Bassat, a member of the Spanish Pediatric Association (AEP), who has advised the Government and communities on the new measures. “They are practically the same as last year, except for the size of the classes, of the bubble groups, which is the most expensive to implement. Also the least necessary. The delta variant is much more infectious and will be more dangerous. We will have to be much more attentive to outbreaks. It must be emphasized that if a child has symptoms, no matter how slight, do not go near the school ”, he emphasizes.

Ángel Hernández Merino, member of the Vaccine Advisory Committee of the AEP, is relatively optimistic that the course will develop with some normality, despite the covid delta. For him, the vaccination of the group between 12 and 19 years old will largely stop the spread in educational centers. “Adolescents have a very different social behavior from that of children, more similar to that of adults, but without their ability to control. The fact that vaccination is progressing among them gives us some peace of mind ”, he assures.

Ventilate, ventilate and ventilate. All the experts consulted agree on this. Rafael Bengoa, a former director of the World Health Organization, emphasizes this: “We have to make anti-fidelity bubbles. That means, yes or yes, masks in and out [en clase y en el patio]. Yes or yes a lot more ventilation, probably CO₂ meters in schools ”. Jeffrey Lazarus, leader of the Health Systems group at the ISGlobal Health Institute, has the same opinion: “In September you have to ventilate a lot. return [la medida] indoors: cinemas, restaurants, schools. The children will be inside and in the cold they will not open windows. And we can’t have millions of unvaccinated kids locked up without good ventilation. “

Peace of mind in the Education departments

The departments of Education of the autonomous communities assure this newspaper to feel calm because its protocols already contemplate different scenarios depending on the alert level of each territory. They describe how the measures would be modified in case of entering alert levels 3 or 4. “Interpersonal distance would be increased to at least 1.5 meters (in secondary school) or outdoor classes would be chosen,” he details. the Valencian region in your document. In the event that presence could not be guaranteed with this change, “it would go to semi-presence”, which is what happened in the previous year.

“At the moment everything remains the same”, indicate sources from the Balearic Ministry after stating that there the vaccination of those over 12 years “is progressing at a good pace.” Madrid points out that “there is no change on what was planned.” The Education Councilor of that community, Enrique Ossorio, requested in the May meeting to reduce the distance between secondary school students to one meter, “in accordance with the provisions of the WHO,” he said. A point that was not awarded.

Catalonia responds that “for the moment there are no changes on the table”, that “it will depend on the epidemiological situation”. Sources of the Ministry of Education of the Canary Islands affirm that “there is little news”.

The document approved in May by the communities and ministries contemplates that if the pandemic indicators improve and the scenario that Health describes as a “new normal” is reached (which includes parameters such as a 14-day incidence of less than 25 cases per 100,000 inhabitants and an occupancy of critical beds less than 5% by covid patients), part of the measures will be able to relax and in schools, for example, bubble groups will be able to coincide in the courtyard with students from other classes of their own level. They are scheduled to meet again in the third week of August to reassess the situation.