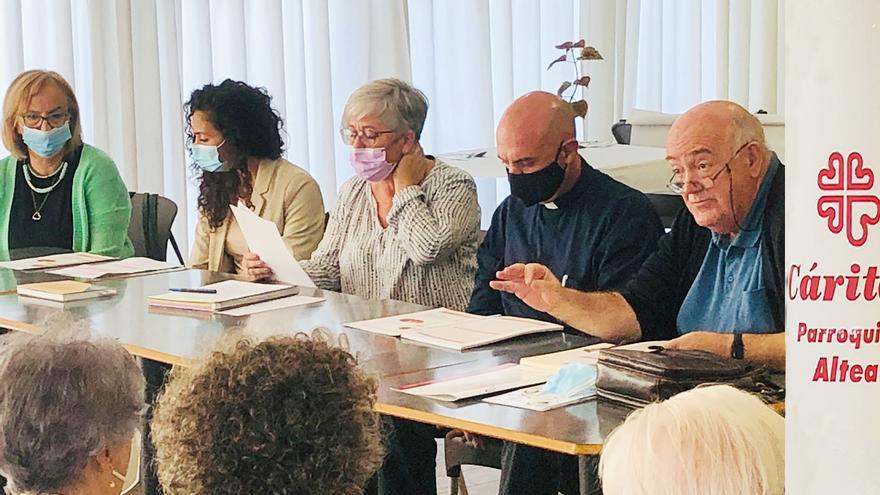 The Intercultural Encounter is part of the collaboration agreement that the consistory maintains with the charity organization Cáritas Altea. The event was chaired by the new Altea parish priest, Francisco Morató, who in turn is president of Cáritas Altea. Accompanying him were the first deputy mayor of Altea, Diego Zaragozí, representing the municipal government team; the diocesan secretary Enrique Abad, representatives of the popular municipal group, and technicians from the Department of Social Welfare. The purpose of this meeting was, mainly, to create an environment of rapprochement and knowledge of the phenomenon of emigration, from which the people of El Alto had extensive experience, especially in the 50s and 60s of the 20th century, with significant flows of emigrants who left in search of a better life in lands like Argentina, Germany, or even Algeria, as the local historian and documentary maker Luis Fuster put it.

From Cáritas they pointed out that “now the phenomenon is reversed and it is up to the people of El Alto to receive this migratory flow and make room for them in our society.” In this sense, Enrique Abad explained the reception and integration services of the Asti-Alicante program, highlighting that legal assistance “is an entirely free service that includes both the advice and the management of all kinds of procedures related to foreigners: work and residence authorizations , family reunification, community regime, nationality, etc. ”. Regarding the social care offered by the Episcopal Secretariat for Migration, its owner revealed that “it is also free and includes four services focused on different situations in which people can find themselves at any given time: Social and labor orientation, housing for respite, maternal and child support, and emotional support for mothers ”. Abad indicated that “our scope of action is the entire province of Alicante, intervening and participating in different places, but our headquarters are located on Calle Doctor Isidoro in Seville, in the Divina Pastora neighborhood of Alicante.”

Intercultural Meeting on Migration in Altea

On the other hand, the parish priest and president of Cáritas Altea, Francisco Morató, and the technician of the Immigration area of ​​the Altea City Council made known the different realities of immigration in the municipality, of the resources available to be able to attend to all the people who need it, and above all accompany them for inclusion within the municipality.

Then there was a gathering moderated by the social worker Gemma Córcoles where the experiences of the people who are welcomed in Altea today were made known in the first person, to empathize with their situation and build an adequate coexistence in addition to promoting a rapprochement between cultures. On this occasion, immigrants who arrived in Altea from other countries, such as Nepalese gynecologist Sabita Pathak and Moroccan economists Toni and Fátima Tahiri, explained to the attendees the reasons why they had to leave their countries, their properties and their roots to look elsewhere. place stability and prosperity that they could not find in their home countries. Exactly the same that, for a century, some Altea had to undertake, but in the opposite direction.

Sabita Pathak explained the tragic circumstances in which she had to leave her country, ravaged by an earthquake. While the Moroccan couple, whose husband had to leave their country in a boat and then claim his wife, they also left looking for a future for their children. All of them with a common denominator: they came to Caritas for help and support. A help that they found and that makes them say that they feel this institution like their family in Spain, for the support and help received.

Also Read  Delete the story to rewrite it | Babelia