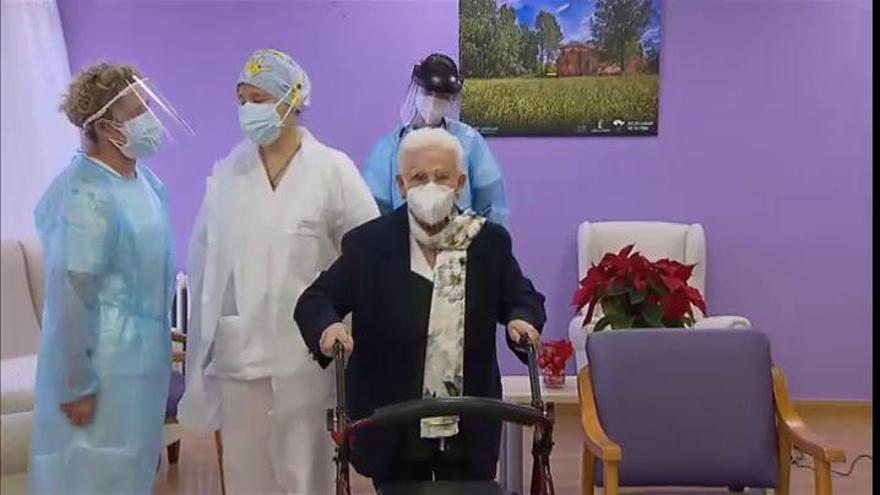 Araceli, Mónica, Josefa, Batiste, Vicente, Nicanor … Elderly people and health professionals from all over the country have given the starting gun this Sunday to the vaccination campaign against covid-19, a turning point in the pandemic, which, however, still has long months ahead.

It was 9 in the morning when Araceli Hidalgo, 96, the oldest resident of the Los Olmos center in Guadalajara, sat on a chair, crossed herself and received the long-awaited first injection. “Well thank you very much“, he said after the puncture, of which he barely felt a” little bit “of itching.

This has been communicated to Carmen Carboné, the nurse who has given him the preparation in his left arm. “Well, that’s all, Araceli, you’ve been the first,” the health worker informed him affectionately. “Thank God“, answered the woman.

After her, Mónica Tapias, a nursing assistant and the youngest worker of the residence, which has been proud that the vaccine has arrived in Spain and has encouraged the population to receive it. “That the majority get vaccinated, there are many people who have not been able to arrive on time.”

The three women have inaugurated the coronavirus vaccination campaign that began on December 27 with the first drug approved in Europe just a few days ago, that of Pfizer / BioNTech, of which Spain has received a first shipment of 9,750 doses.

Like Araceli’s, the image of hope has been repeated by all communitiess who have started the process at the same time: Consuelo, Begoña and Bernardina have put her in Euskadi; Nicanor, in Madrid; Antonio and Pilar, in Andalusia; Josefa, in Catalonia; Batiste, in the Valencian Community; Vicente and María Petra in Extremadura …

They, the most affected and vulnerable to the virus, are part of the four priority groups -inmates and workers of nursing homes and centers for people with disabilities, health personnel and large non-institutionalized dependents- to whom the first vaccines will be gradually administered as they arrive.

Cominarty, as it’s called from Pfizer and BioNTech, requires two doses, 21 days apart, to generate immune response and it will be inoculated simultaneously and free of charge in all autonomous communities thanks to the collaboration of the security forces of the State and the Army, which have been in charge of distributing the treatments throughout the national territory.

After this first anticipated batch of almost 10,000 units that arrived on Saturday from Belgium to the warehouses that Pfizer has in Guadalajara, another of 350,000 will follow this Monday. This shipment will be repeated every Monday for the next 12 weeks up to 4,591,275 vaccines purchased from this laboratory, with which 2,295,638 citizens will be immunized.

The doses will be distributed equally among the communities based on your population at risk, and it will be compensated in a staggered way with the new deliveries of this drug, which may be joined very soon by Moderna, which will be evaluated by the European Medicines Agency (EMA, for its acronym in English) on January 6 .

“It’s the beginning of the end, but there are months ahead that will not be easy“, has warned the Minister of Health, Salvador Illa, in an appearance in which he has warned that the vaccination process will be” complex and will last a few months “; his forecast is that in May or June they may be immunized between 15 and 20 million citizens.

Meanwhile, and although today is a “day of hope” that marks a “inflection point“In the pandemic, the minister has insisted on the need not to relax or lower his guard, especially during these Christmas holidays, since” the data are worrying. “Not in vain, the incidence, which broke a few days ago with several weeks of continuous descent, continues to rise this Sunday in several autonomies.

For example, the epidemiological situation has worsened in Catalonia, which added 1,048 new infections and 25 deaths in the last 24 hours and, with it, the speed of spread of the coronavirus (Rt) and the risk of regrowth have increased.

In Euskadi, 226 positives were diagnosed on Saturday and the rate of positivity continues for the third consecutive day above 5%; Andalusia, for its part, has added 682 new cases and 17 deaths in the last 24 hours, while Castilla y León has recorded 176 more infections, almost double than yesterday.

On the contrary, in Navarra the new cases have fallen to 72, which confirms a certain stability after adding 82 the day before, although there are two deaths. And the hospitals in La Rioja have registered a slight decrease in healthcare pressure, with four fewer admissions and no deaths, but active cases have increased by 13.

Given these data, Illa has called once again to “follow the instructions to the letter”. “May the joys of these days not be tears when the Three Kings Day passes,” he concluded.