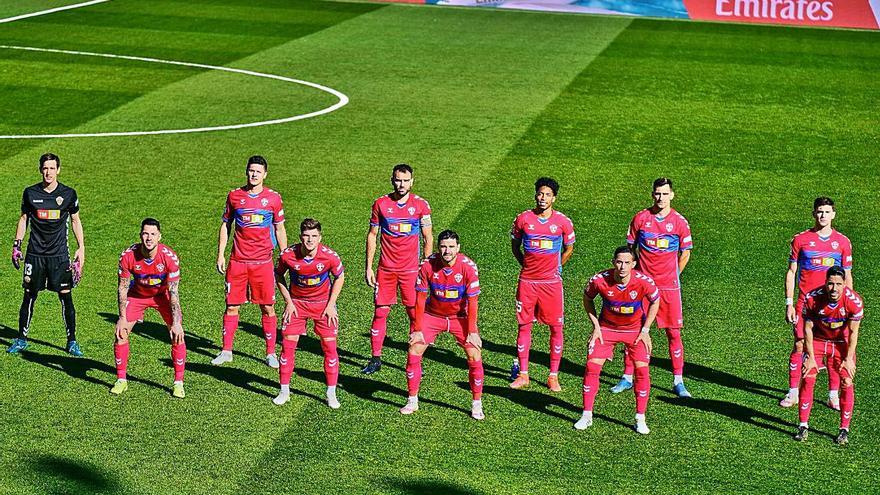 Of the five games that the Valencian coach has directed the Elche team, in four of them the starting team has been practically the same. Only some piece has changed for obligatory reasons, physical annoyances or penalties. Escribá knew that having two forwards like Lucas Boyé and Guido Carrillo had to get the most out of them. And because of this, his bet on 1-4-4-2 has been fixed from the beginning.

In goal there was no doubt that he would continue to count on Edgar Badia. Despite the arrival of Gazzaniga in the winter market, the Catalan goalkeeper is untouchable due to the great season he is having.

On the right side, the franjiverde coach was also clear that he had to recover the best version of Barragán, because from his experience, he had to be an important player. And so it has been. The Galician has played all five games and only left the field last Saturday to stop Real Madrid due to muscle discomfort that occurred at the beginning of the game and forced him to leave the pitch after 30 minutes.

On the left side, Mojica is also fixed. The Colombian missed the match two days ago against Sevilla because he had a week with hamstring problems that led to him being replaced by Josema in the Los Cármenes match against Granada.

The greatest novelty since the arrival of Escribá has occurred in the center of the rear. Gonzalo Verdú, as with Almirón, is the undisputed starter. But your partner has changed. The new coach bet from the first moment on Dani Calvo, relegated to the fourth center with the Argentine coach, and the Huesca player has responded with defensive solidity and with two headed goals, one against Eibar and the other against Madrid. Dani Calvo has only been a substitute at the Camp Nou against Barça because the Valencian coach wanted to rotate, when played during the week, and give him rest thinking about the following Sunday in Granada. Josema, the versatile man in defense, was his substitute.

Another clear thing for Fran Escribá from the first moment has been the double pivot. Marcone in more defensive tasks and Raúl Guti with more freedom. The Argentine only missed the clash against Barcelona by accumulating five cards. In the other four stakes he has started, although the new coach has not finished getting all the desired performance and, therefore, in a game, such as against Sevilla, he changed him in the last minutes for Mfulu, who was already his substitute at the Camp Nou. For his part, the Zaragoza player has played practically everything in the five games that the Valencian coach has been running, and his performance has increased.

Tete Morente has regained ownership. His versatility allows him to play on both wings, but with Almirón he played more on the left. With Write you usually start from the right. The Valencian likes to have a winger with a different leg. Josan has been the one who has lost his position and, now, the crevillentino is more time on the bench, although he usually comes out in all the games.

Rigoni started playing on the left, having improved his level in recent games with Almirón. The Argentine started the first two games against Eibar and Barcelona. But as soon as Fidel returned from his injury, after more than a month in the dry dock, the Huelva player is another of the fixed and has initially come out in the last three stakes against Granada, Seville and Real Madrid. His presence gives the team balance on the wing, more possession of the ball, centers and hitting from set pieces.

And up front there are no doubts either. Lucas Boyé and Guido Carrillo are the chosen ones. The two Argentine tanks have formed the attacking duo in all matches, except at the Camp Nou, also due to rotations, where Escribá opted for Pere Milla and gave Carrillo rest, thinking of Granada.

Five others: Dani Calvo, Mojica, Iván Marcone, Tete Morente and Guido Carrillo have done so in four and only have not played initially due to special circumstances of sanction, injury or rotation.

There are already ten of the headlines. And the one who is missing is Fidel, who missed the first two due to injury, in which Rigoni played, but since he recovered and has picked up the rhythm of the game, he is another of the untouchables. Escribá has found his eleven and it will be very difficult for substantial changes to take place.

Despite having a fairly defined eleven, Fran Escribá is giving minutes to most of the rest of the squad. Proof of this is that up to 20 footballers have participated in at least two games with the new coach. Rigoni and Josema have started in two games, Cifu has started in one and has played in two others. Josan and Mfulu have dated in all five. Pere Milla has done it in three, with one title; Nino played in the final stretch of the games against Barcelona and Granada. Diego González and Luismi Sánchez also enjoyed the last minutes against Sevilla and the first against Madrid, while Víctor Rodríguez played in the second half in Granada. Of the 24 members of the squad, the only ones who have not played with Escribá yet are the substitute goalkeeper Gazzaniga, Helibelton Palacios and the latest signing Pablo Piatti, who will make his debut shortly.