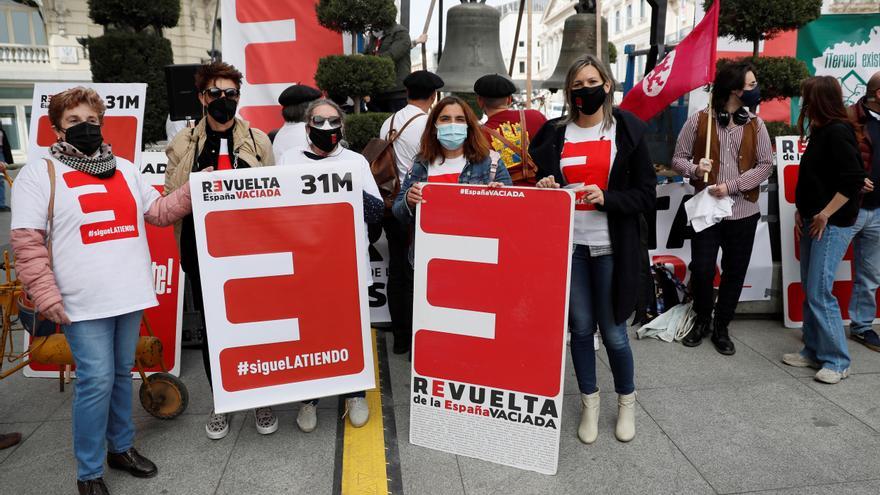 The Empty Spain is in populated Spain. Or at least part of it. With this idea in mind, several citizens who currently live in the capital of Madrid but have their origins in other increasingly uninhabited territories have decided present a platform in the Community of Madrid that represents the interests of the Emptied Spain in the region. The objective is clear: attract to his cause the population that lives in kilometer zero of the peninsula. It is not, therefore, a matter of representing the small municipalities of the community, mainly located in the north, which may be losing population and stand up to the ground to Isabel Díaz Ayuso but to defend from Madrid the discourse of territorial cohesion at a national level as they understand it.

The coming-out of this new platform will be the next January 27th in one of the many regional houses in the capital, in the House of Soria in Madrid, coincidentally located just 5 minutes from the Congress of Deputies and the Puerta del Sol. “In the capital you see the other side of the coin of the emptied Spain,” he says Diego Loras, spokesman for this new platform in the making, “with saturated public services, traffic jams on urban roads and housing with skyrocketing prices” due to the high density of the population in the capital and its nearby municipalities. In their opinion, the “Empty Spain” project has ceased to be understood as a localist proposal to become a proposal that is committed to territorial balance” and this is what encourages them to think that their platform can be successful in Madrid and drag the support of the population that at some point emigrated to the capital but still maintains ties with their place of origin.

The time has come to have a more balanced country

Together we add more!! pic.twitter.com/pDkXQHbvVL

Coincidentally, this presentation takes place after the announcement of the electoral call in Castilla y León and a few weeks before the appointment, on February 13. However, from the platform they assure that their initiative is not focused only on this electoral event. “The dates have coincided, this would have happened with or without elections in Castilla y León”, explains Loras to El Periódico de España. But he recognizes that everything that serves to add to the different candidacies that are presented to compete with the traditional parties in the neighboring community is welcome. “When these elections are over, we will continue to organize events through the regional houses, it is an independent process, but if it helps, fine.” After these elections, those of Andalusia will come, whose date for the electoral advance is not yet known, then the rest of the autonomous communities and, finally, the general ones.

political scientist Paul Simon, asked by El Periódico de España, explains that this initiative makes “a lot of sense” because the capital can serve this platform as a loudspeaker in the depopulated regions themselves. The strange thing, he points out, is that they don’t work on it anymore because there is a “floating population”, mainly university students, which they could reach.

In effect, it is difficult to know how many citizens of the so-called Empty Spain live in Madrid and that could be the object of the messages of this movement; the only certain population data are those indicated by the census, which does not specify the interterritorial origin of the new census, but there is a floating population that comes to the capital to study or work and lives there without being registered for years. In addition, due to the pandemic, the data may be fluctuating.

One study of the Autonomous University of Barcelona carried out, precisely, shortly before the appearance of the virus on the “Educational decapitalization and second wave of depopulation” and that analyzes the migratory movements of the population between 25 and 39 years between the different autonomous communities between 2013 and 2017, indicates that Madrid is consolidated as “the main receiver of talent” Y it brings together 38.7% of the migratory movements of young people. In addition, according to this study, the Community of Madrid mainly attracts a very well-prepared population, being 64.9% of young people from other regions university graduates. The study also points out that Castilla y León is the region most affected by migratory losses, but its main conclusion is that the exodus is not only from the most rural populations to large capitals such as Madrid, Barcelona, ​​Valencia or Zaragoza, but rather that “increasingly migration to these cities occurs from the capitals of province”.

Also Read  The aragonite of Crevillent and Jiménez de Cisneros

Loras himself is an example of this. Originally from the province of Teruel, he left there when he was 18 and now, at 25, he is working on his doctorate in economics at the Universidad Pontificia de Comillas, where he also teaches. The platform that will be presented at the end of January in Madrid is made up of more than twenty citizens of the so-called emptied Spain. There are people from Teruel, Soria, Burgos, Ávila, Asturias… and Loras recognizes that one of the singularities of this initiative is that both its representatives and the public they address is younger than in other provinces because there are “many students and young people developing their first professional stage in Madrid” whom they want to address, although they also include people who have made their lives in the capital after having arrived in the big city decades ago.

Candidacy for the generals?

Simón differentiates two scenarios different in the strategy of this new initiative of the Emptied Spain. On the one hand, he understands that the idea of ​​addressing that population residing in Madrid but registered in the census in their places of origin can give a positive result to your boosters. This representation and activity in the capital will serve as a loudspeaker and will provoke an echo in the different provinces and, in addition, will serve to circumvent possible difficulties they may have in local media and regional. “If someone is on a national TV show or national media it’s easier to be famous locally,” he explains.

Rather, he thinks it would be “counterproductive” and that “it doesn’t make sense” that the strategy is to work on this platform to develop a future list for Madrid facing generals. The latter, however, is not decided. Still. The idea is to present in the coming weeks the development model proposed by the Emptied Spain, a document on which all the associations and territorial groups that make up or give content to the national platform worked throughout 2020, and to organize events, mainly in the regional houses of the capital but not only, to make it known. “They will not be acts to talk about the elections,” explains Loras, neither for the immediate regional ones nor for the general ones. But he does not rule out that later, depending on the interest aroused by this new platform in the capital, the candidacy in Madrid could become a reality. “We believe that some of the people who live in Madrid would like to return to their place of origin” if the conditions and services are right, “others may simply want a better redistribution,” concludes Loras.