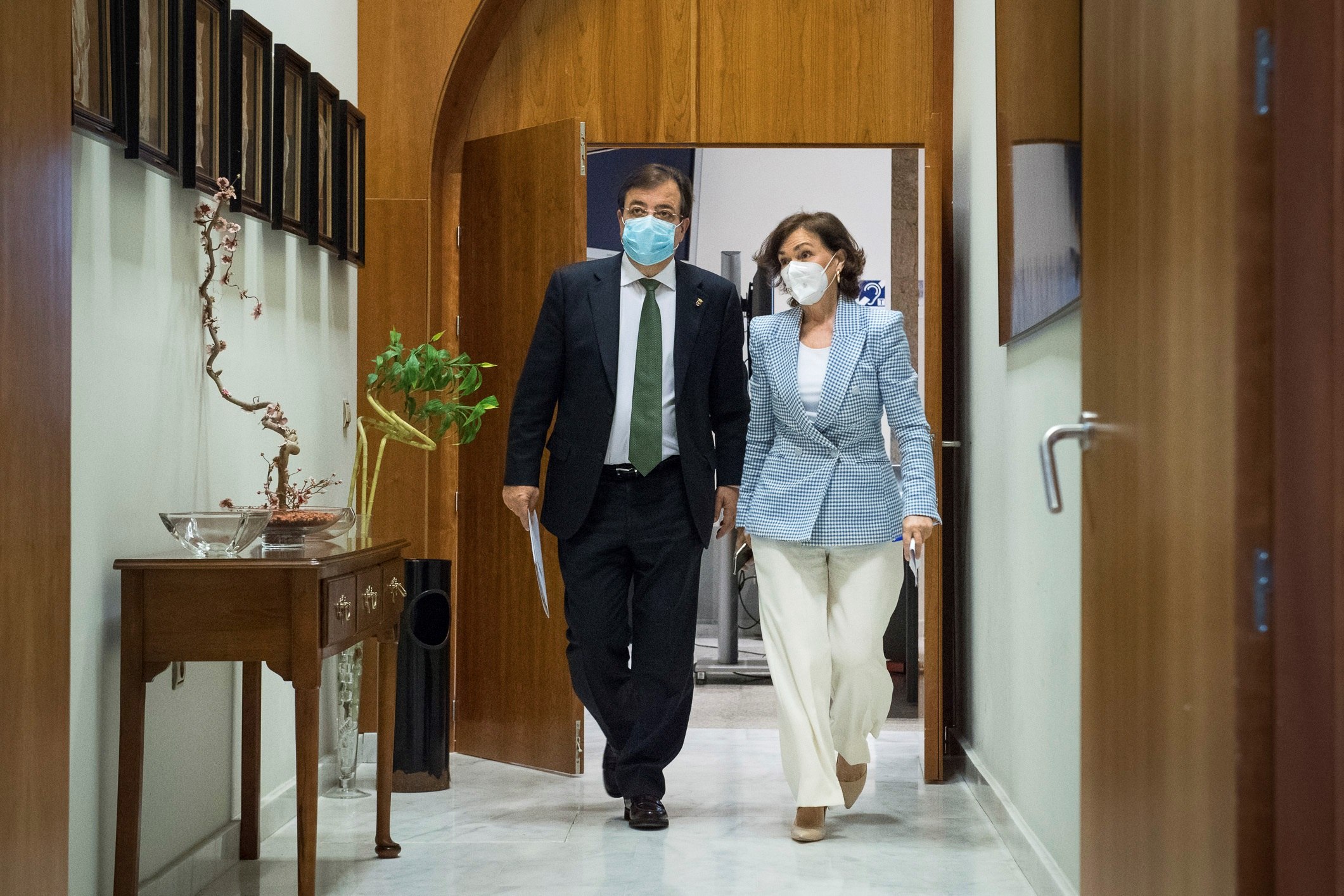 Two fronts threaten the co-governance of the pandemic: vaccination and the end of the state of alarm on May 9. The regional presidents consulted assure that they learned of the end of the rule that has protected, among other measures, the curfew, through Pedro Sánchez’s press conference last Tuesday. For Alberto Núñez Feijóo, the end of the state of alarm leads them to “a double somersault” since the restrictions they impose thereafter can be annulled in the courts. The leader of the PP, Pablo Casado, calls for an alternative legal plan, but the Executive dismisses it: “There is no need to modify the legislation.”

The Prime Minister decided to appear himself at the press conference after the Council of Ministers last Tuesday because there were two good news to share. On the one hand, he announced that by the end of August 70% of the population (33 million inhabitants) will be vaccinated in Spain. On the other hand, that, if nothing goes wrong, on May 9 the current state of alarm will end. But in just 24 hours, conflicts with the autonomous governments have exploded, annoying, above all, for learning at the same time as the rest of Spaniards of the plan to end the emergency legislation that has protected, for example, the touch of It remains in force from October 25.

The PP abstained in October in the six-month extension of the current state of alarm in Congress – and in the fortnightly extensions of the one decreed in March 2020 at the beginning of the pandemic, it used the three possible votes: yes, no, and abstention. . Its leader, Pablo Casado, has often referred to the measure as a formula for a “disguised state of exception”, although in recent days, asked about it, both the spokesperson in Congress, Cuca Gamarra, and the deputy secretary of organization , Ana Beltrán, had avoided clarifying whether they would support a new extension: “It will be seen.”

The national leadership of the PP recalls that Casado already raised to Sánchez the need to develop a plan b alternative to the state of alarm, which would mean modifying article 3 of the Law on Special Measures in Public Health, of 1986, to limit entry and exit from areas affected by the virus and control movement. “After 100,000 deaths, Sánchez continues to reject our law against pandemics. He prefers to govern by decree and to derive his responsibility in the autonomies ”, insisted this Wednesday the leader of the PP.

The Executive discards that alternative plan. Vice President Carmen Calvo tried to settle the matter this Wednesday: “No legislation has to be modified, nothing has to be added to deal with May 10. We have it rehearsed, and with a good response from our courts, like the one given by the Supreme Court not more than ten days ago. We are prepared to face the day after the disappearance of the state of alarm ”. But his words have not convinced all the regional leaders.

The Galician president, Alberto Núñez Feijóo, accused Sánchez of leading the autonomies to “a double somersault” with the end of the state of alarm because they lack a “legally sound alternative to continue managing the pandemic.” “There is no specific legislation to be able to make decisions such as limitation of movements, closure of economic activities and limitation of fundamental rights,” he insisted. Feijóo fears that the decisions taken from that moment will be annulled by the courts of justice, criticizes that the Government resorts to the Constitutional Health Law that they have approved in Galicia and demands that article by article be analyzed in the mixed commission which ones are they consider unconstitutional, especially now that he considers that said law would help them to face the pandemic once the state of alarm ends.

Both Feijóo and the people of Andalusia and Madrid, both from the PP, and the lehendakari, Iñigo Urkullu, from the PNV, urge a conference of regional presidents to analyze the steps to be followed as of May 10. The Cantabrian president, Miguel Ángel Revilla, was also surprised by Sánchez’s announcement – “it would not have hurt a little call” – although he was in favor of “opening Spain” and beginning to “live” with the virus.

Among the communities governed by the PSOE the concern is less. The president of Navarra, María Chivite, recalled that neither her government nor the central Executive has “shaken their pulse” when making decisions to limit the advance of the pandemic. Extremadura’s president, Guillermo Fernández Vara, said that the state of alarm could not last much longer.

The other open front is that of vaccinations. The Government launched this Wednesday a preventive notice to the autonomous communities after it was known that the Madrid Minister of Health, Enrique García Escudero, contacted on his own with suppliers of the Russian Sputnik vaccine and that his counterpart in Castilla y León, Verónica Casado , discontinue vaccination with AstraZeneca in the region. Carmen Calvo was blunt: “The decisions of what vaccines, with what health criteria and what calendar correspond to the Interterritorial Council and that has been decided. It does not correspond to any autonomous community ”. Board sources assure that her Health Minister, Verónica Casado, communicated her decision to the Minister of Health early in the morning and that she replied that it was within her competence. The Ministry of Health did not provide this newspaper with its version of the conversation.

The Junta de Castilla y León decided to preventively paralyze vaccination with AstraZeneca, which is provided to children under 65 years of age and groups such as teachers or police, after a position in the European Medicines Agency perceived “links” between said vaccine and cases thrombi. The European pharmaceutical regulator assured this Wednesday that blood clots should be incorporated as “very rare side effects”, but considers that the benefits of the AstraZeneca vaccine remain “much greater” than the risks. After discussing it in the inter-territorial council of Health, the Ministry of Health and the autonomous communities agreed last night to suspend vaccination with doses of AstraZeneca in children under 60 years of age, so that only people between the ages of 60 and 65 receive it. Castilla y León will resume “in the next few hours” the vaccination of this group with these doses.

Calvo against Ayuso: it is “ridiculous” to negotiate “unilaterally”

Regarding the contacts of the Madrid Health Minister with suppliers of the Russian vaccine Sputnik, the vice president Carmen Calvo yesterday called it “ridiculous” that an autonomous community negotiates “unilaterally” issues related to vaccines when the European Union defends that it is better than Member States do not do it “on their own”.

Most of the autonomies deny parallel meetings and defend the European strategy. The Galician president, Alberto Núñez Feijóo, rebuked Isabel Díaz Ayuso, without citing her: “You cannot buy vaccines not authorized by the European Medicines Agency and without notifying the Interterritorial Health Council.”

The Valencian president, Ximo Puig, denied that his meeting with representatives of Janssen was to “negotiate anything.” The almost two million vaccines he spoke of are those that will reach the community due to the proportional distribution of inhabitants signed by the European Union, he declared in the SER.

With information from Juan Navarro and Ferrán Bono.