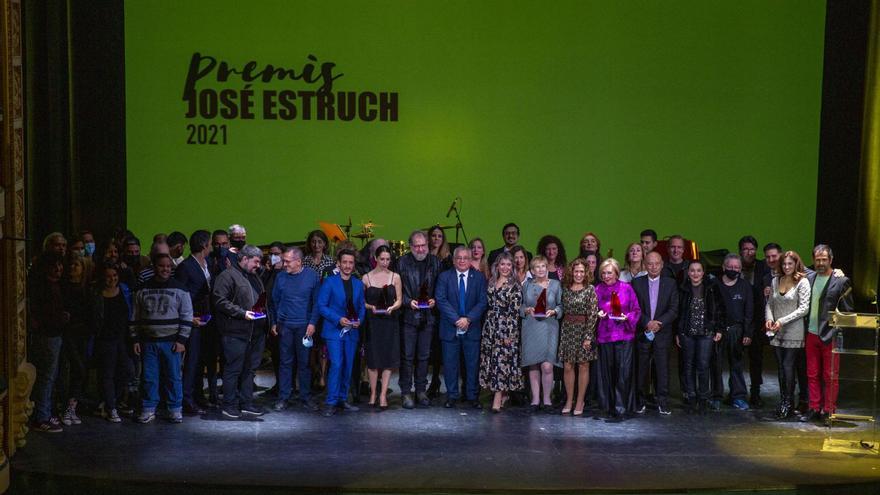 The gala -which lacked an audience to cover the winners- was led by the actor and director Morgan Blasco and began with the award for the best spectator, which on this occasion was special as it fell on two collective protagonists: the public of the theater, for having demonstrated “their ability to adapt and their confidence” in fragile times, and the staff of the coliseum itself for the same circumstances, helping to maintain seasons that have had to be rescheduled on several occasions.

The theater showed its “eternal gratitude” to the one who was its director for fifteen years, Luis de Castro, who died in May 2020, whom Blasco described as “a lover of theater who managed to place our city on the national theater scene” and recalled also to the tramoya officer and “exceptional friend” José Luis Sirvent, Pepeíllo, who died two months ago leaving “a huge void between his teammates.”

The Alicante illuminator Juanjo Llorens, winner of four Max awards (the last one for La mort i la maiden by Asun Noales) was distinguished for his contribution to the Valencian performing arts, an award that, he said, makes him “very happy” to receive it in the theater “where it all began.” Llorens recalled those who taught him the trade and his colleagues “who continue to fight for the theater” without forgetting that light, his specialty, “is the first and the last thing we see” on stage.

The complete cast of Jauría, a work created from the transcription of the La Manada trial for a gang rape, was recognized with the award for the best supporting performance in this drama staged with the direction of Miguel del Arco: Fran Cantos, María Hervás, Javier Mora, Martiño Rivas, Ignacio Mateos and Raúl Prieto. The latter two were grateful that for the first time “the cast” was recognized, who formed “family” and made an effort so that this difficult work was understood by the public. “During creation we cried, laughed and blocked ourselves with this crude story, for fear that it would not be understood,” they indicated, the message launched by gender equality. The award was dedicated “to her.”

Also Read  Ancelotti and his dilemma before El Clásico: Rodrygo, Valverde or Modric

Juan Diego Botto, recent National Theater Award for his moving work on Lorca -Una noche sin luna, also awarded here- was present at the gala through a video, in which he thanked “from the bottom of his heart” for the award to its interpretation in a text of his creation, which he described as «an opportunity to talk about memory, of Lorca, to remember that the snake’s egg is always there and that beauty and human rights must always be close to dark times do not repeat themselves ». His llàntia – the sculpture created by Miguel Bañuls – was collected by his sister Nur Al Levi, also an actress, who added the “honor” of receiving the distinction “with the name of this man, José Estruch, a member of La Barraca de García Lorca” .

Another who also could not pick up the llàntia in person was Sergio Peris-Mencheta, also director of Una noche sin luna but distinguished in the Estruch for his work in Lehman Trilogy, a play with 120 characters interpreted by six actor musicians. On his behalf, the producer Concha Busto indicated that it was not easy to carry out this work “of three hours talking about capitalism that had all the ballots to give a hostion”, so its director dedicated the award “to all the impossible projects that they risk ».

The one who did take the stage was the playwright Jordi Casanovas, author of Jauría, who endorsed what was said by his companions and recalled that risk that Peris Mencheta spoke of, since he harbored “many doubts” when working with a “so delicate” subject offering a new point of view and carrying the message that «we must take risks so that things happen in the theater» and, again, dedicating it to «her», the victim of La Manada, «a brave person who had a lot of strength and resistance» .

Sophia Acosta, Guillem Fluixà, Rosa Schmid, Nicoló Marzoli and Lomi Szil were in charge of accompanying these awards with their juggling and acrobatics, as were the musicians Dani Catalá, Carlos Porcel, Benja Marpe, Héctor Stewe, Francesco Severino and Vicente Climent.