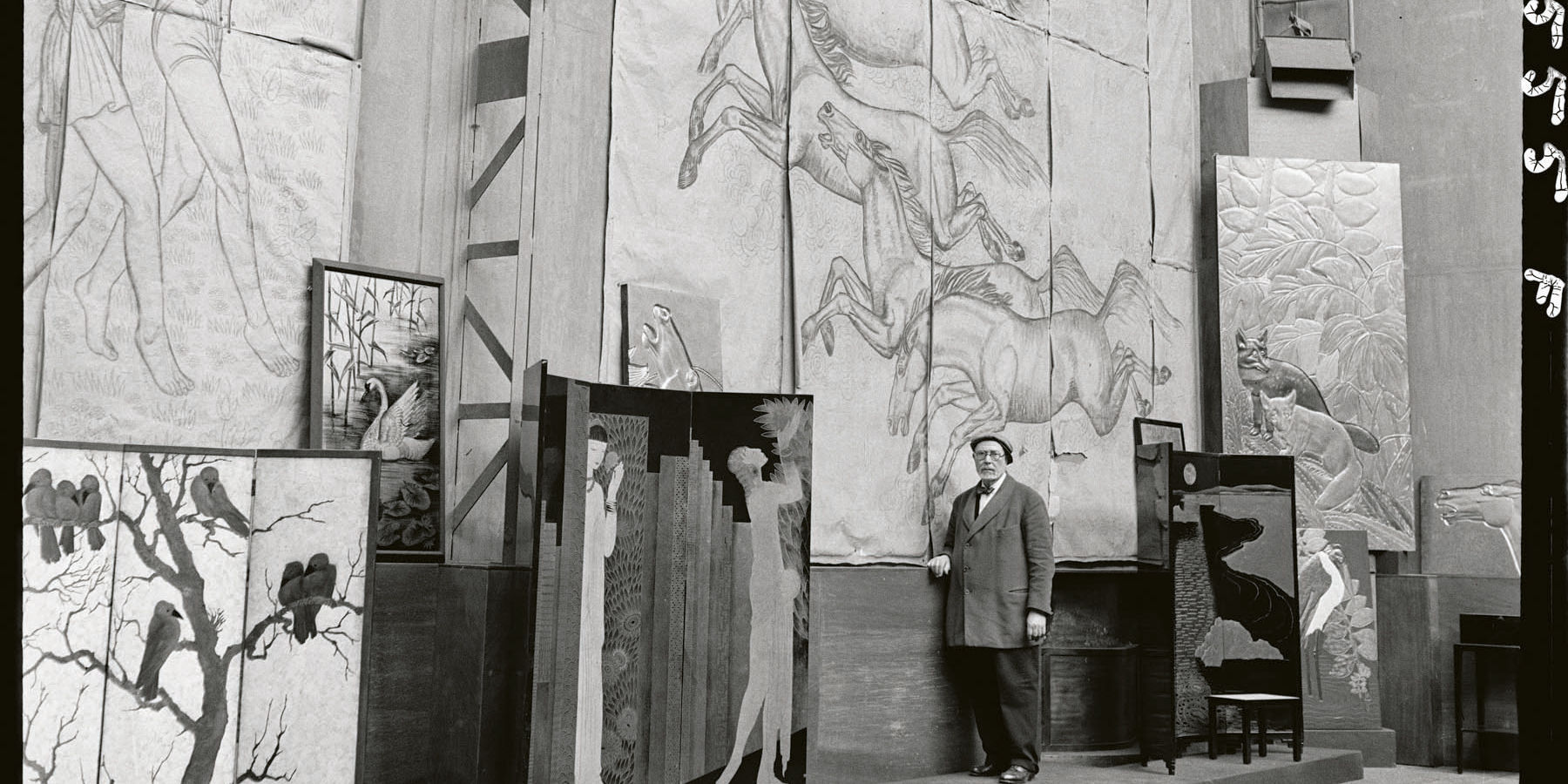 The fashion world has come to the rescue of Jean Dunand. Thanks to such illustrious admirers as Marc Jacobs, Yves Saint Laurent or Karl Lagerfeld, The Swiss artist, who died in 1942, has recovered in recent decades part of the popularity and enormous prestige that he enjoyed in life. His work is once again very high.

Because Dunand’s is a story of sustained rise, posthumous oblivion and late resurrection, when no one expected it anymore. Born in Lancy, in the Swiss canton of Geneva, and emigrated to Paris at the age of 20, he put down very firm roots in the French capital, although soon, out of sheer pragmatism, he decided to park his first vocation, sculpture, to focus on the arts decorative. Thanks to them, everything was in that Paris of the 1920s, one of the most stimulating creative environments in the history of culture and the fine arts. With its neat, precious and exquisite style, closely associated with art Deco At the time in vogue, Dunand managed a workshop with more than 60 employees, decorated ocean liners and luxury hotels, had great clients among the high aristocracy of Paris and portrayed celebrities like the American singer Josephine Baker.

However, after World War II, the work of this triumphant single verse went out of style. His name became a footnote in the great book of contemporary art. Paris left its stage behind art deco and that style, associated with a period of hedonism and euphoria, was replaced by less frivolous, more conceptual avant-gardes. It took several decades for Andy Warhol reivindicase a Dunand, which he saw as a missing link between the ornamental exuberance of interwar Paris and the pop art. Later, in the late 20th century, Lagerfeld became a relentless collector of his work and helped popularize his name among the elite of fashion designers. This belated reassessment has consolidated Dunand among the most sought-after artists precisely now, almost 80 years after his death and almost a century away from his most successful and fertile creative stage.

The last crossing of the Normandie

Just a week ago, it became clear to what extent Dunand enjoys an unexpected validity. Last Saturday, February 20, a very suggestive batch of his works was auctioned in the French port city of Le Havre, 18 decorative panels made in 1934 for the Normandie cruise line. They were expected to fetch a price of around 300,000 euros, but in the end they were sold for a much higher amount: 770,000. Almost 400 collectors, 370 to be exact, participated in the bidding, although only 50 of them, chosen by lottery, were able to be present in the room where the auction was held.

According to Amélie Marcilhac, author of a monograph on Dunand, the auctioned lot includes “some of his undisputed masterpieces”. Marcilhac explains that the artist dedicated a whole year to working on this ambitious set of decorative pieces: “He charged a lot of money for them, but he worked day and night, without rest, and at the end of the process he was exhausted. He was 58 years old, he had been working at a very high level of demand for more than 30 years and his body never fully recovered from such intense effort ”.

The Normandie, a 313-meter-long luxury ocean liner that covered the journey between Le Havre and New York for years, calling at the British port of Southampton, it was, according to New York gallery owner Jake Baer, ​​”a floating palace.” And that’s how Dunand wanted to decorate his walls, starting with those of his tea room and his smoking room: like those of a palace. By then, he had left behind the abstract and geometric motifs that predominated in his youth work. Influenced by the style of the painter Henri Rousseau, the late Dunand made sumptuous lacquered and embossed figurative art with goldwork finishes. Hunting scenes in paradisiacal environments reminiscent of the Garden of Eden, zebras, bears, cats, rabbits and penguins, trees with the texture of a tapestry and the delirious coloring of a peacock’s tail.

Dunand gave free rein to his fantasy in his studio on Parisian rue Hallé, a place that had something of a Persian souk and a zoo. In it he raised chickens and pigeons and even kept a Chilean leopard calf in a cage, a gift from a client, whom he called Toya and fed two kilos of raw meat daily. The animal kingdom with its capricious forms, had already become the main source of inspiration for him by now. But since his work hardly allowed him to walk on the street, he surrounded himself with animals in the only space he frequented: his study. His grandchildren, as recalled by one of them, Jean-Paul Dunand, were always welcome in their grandfather’s Noah’s ark: “He was a hostage to his job, but also a cheerful and joking person, who took his life with a almost childish enthusiasm and adored his family ”.

With your panels for the Normandie, the artist was able to retaliate for a disaster that hurt his soul: the destruction of another large cruise liner decorated by him, the Atlantique. The ship had burned in 1933, barely a year after its first voyage, and what Dunand considered an essential part of his own mature work was lost forever. The Normandie was for him the opportunity to recover part of what the flames had consumed. That was, according to Marcilhac, his last great project, his artistic testament.

The man who captured the essence of Josephine Baker

Years before that twilight success, in March 1927, Dunand had portrayed Josephine Baker in his studio on rue Hallé. He wanted to show her, as he noted in his diaries, “as an ebony goddess, the only inhabitant of a tropical fantasy kingdom.” In the lacquer-varnished sheet barely half a meter high that was the result of those sessions, Baker appears barefoot and half-naked at the foot of a palm tree, wearing an exotic necklace, a fancy loincloth and colored bracelets on her wrist, with her usual short, kinky, glitter-covered hair and a lipstick-filled smile on her lips.

The Harlem diva was 21 years old at the time and had just settled in Paris, where the commercial attaché of the United States embassy, ​​Donald J. Reagan, had offered her a salary of $ 250 a week for “helping to bring culture to Europe. North American”. In France, Baker caused a sensation. His jazz and variety show was valued as a lofty example of avant-garde folk art. The French press began to refer to her as the ebony Venus. Both rogue nocturnal Paris and the intellectual elite fell in love with her, with her freshness and her happy self-confidence.

Dunand met her at the end of 1926, when she was asked to take charge of the sets for It, one of the roles starring Baker. It did not go unnoticed by the singer that this Dunand was a man of original ideas and exquisite taste, the first who wanted to go beyond the cliché and surrounded her with delicious geometric fantasies instead of giant bananas, fruit crowns, boas and coconut trees. . They hit it off, and the Missouri-born diva would go on to become one of the Swiss’s VIP clients, whom she also valued for his sense of humor and always courteous manner.

At the time of his first collaboration with Baker, Dunand was riding high. At the age of 50, the painter, sculptor, designer, decorator, interior designer and goldsmith ran a massive workshop, a factory of ornamental delicacies always in full swing. His success was the result of talent, self-denial and effort. As his grandson Jean-Paul recalled, his grandfather “worked piecework, up to 19 or 20 hours a day, with no weekends or vacations that went beyond a week in the fields very occasionally. He would leave the study for just a moment, to eat with the family. He devoured his couple of dishes, made a joke on the children and went back to work ”.

This Stakhanovistic lifestyle allowed him to gain an enviable portfolio of clients and leave the troubles and hardships of his early youth far behind, but it would also end up breaking his health. Despite everything, he remained active until his death, at age 65, in the middle of the world war. The expert in contemporary art Caroline Legrand considers him “one of the most significant representatives of Parisian Art Deco of the 20s and 30s”. An extraordinarily talented professional “who always played all the clubs from a very personal sensitivity.” What makes him different from most of his contemporaries is, according to Legrand, “his application of the traditional Japanese lacquering technique, which he learned from master Seizo Sugawara and developed until it became his differential element, his signature stamp”.

The fact is that the work of the man who portrayed Josephine Baker as an ebony pop goddess has not stopped increasing its price so far in the 20th century. In February 2009, for example, a monumental vessel that Dunand had sold for 5,000 francs (the equivalent of about 7,500 euros today) in 1925 exceeded 3.5 million at an auction at Christie’s.

According to Caroline Legrand, Dunand would have loved to see the true fortunes that are being paid right now for pieces in his catalog: “He was a perfectionist and very ambitious professional, but he always had doubts about the real value of his work. He considered himself more a craftsman than an artist. I was sure that I had created a lot of beautiful objects, but I knew that, in art, the ‘beautiful’ is often considered the enemy of the sublime ”. Today, beautiful it continues to be priced very well. And the sublimeWhatever is paid for it, it is still priceless.