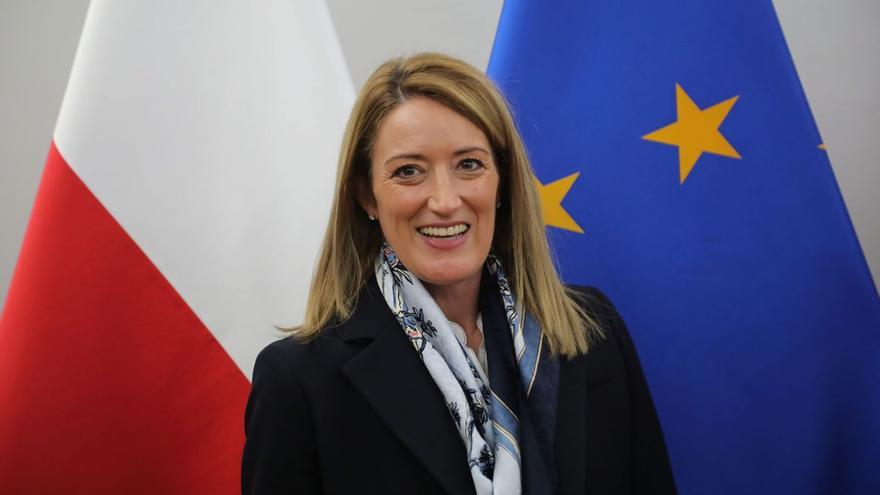 One of the first tasks of the year 2022 that will have on the table the European Parliament when it meets from 17 January in the Alsatian capital of Strasbourg it will be the election of your new president. After two and a half years in office, David Sassoli’s tenure comes to an end and in the absence of a viable alternative, the social democrats have chosen to take a step back and not fight for the position. This decision prevents the political agreement to divide the presidency between popular and socialists from being blown up in the middle of a difficult and very particular legislature, marked by a pandemic that has greatly complicated the legislative and logistical activity of the chamber.

The decision of the group of European Socialists and Democrats (S&D) and of the Liberals of Renew Europe, the second and third with the greatest weight in the chamber, not to present a candidate for office clear the way for Roberta Metsola (Malta, 42 years old), nominated by the European People’s Party (EPP) last November and a great favorite to replace Sassoli. The only two groups to present a candidate, outside of the EPP, have been the European Conservatives and Reformists (ECR) and the European Left.

The first, in which Vox is integrated, has presented the Polish ultraconservative party Law and Justice (PiS), Kosma Zlotowski. The left, for its part, has nominated the Spanish Sira Rego. Both groups have 64 and 39 MEPs respectively and, although neither Socialists nor Liberals have confirmed their support for the EPP candidate – the main group with 177 seats – the lack of a clear alternative makes it highly unlikely that they could jeopardize Metsola’s future. Before becoming one of the first MEPs for Malta in 2013, this lawyer – graduated from the College of Europe in Bruges, a pool of diplomats and senior European officials – worked in the Maltese delegation to the EU and was an advisor to the Head of European diplomacy, Catherine Ashton.

Also Read  How We Met: 'It was love at first sight, for me' | Life and Style

Current First Vice President of the chamber – she replaced Irish conservative Mairead McGuinness in 2019 when she was appointed European Commissioner for Financial Services and Capital Markets – her appointment has drawn much criticism from part of the left for her views on women’s reproductive rights and her repeated opposition to abortion, illegal in his native Malta. Despite this obvious obstacle, the Maltese, who represents the most progressive wing of the European Conservatives, has left a positive impression on another part of the bench thanks to her negotiating spirit in immigration policy and his support for the collective LGBTI.

Play too in his favor the fact that he is a woman. The presidency of the European Parliament has only counted in its history, more than twenty years ago, with two women at the helm – the French socialist Simone Veil and the French conservative Nicole Fontaine – and many of their colleagues consider that the time has come to pass the witness to a woman from a small country such as Malta, which together with Luxembourg or Cyprus has one of the smallest delegations with only 6 MEPs compared to 59 from Spain, 76 from Italy or 95 from Germany.

Transferring the presidency of the European Parliament to popular hands will allow save the pact of legislature closed two and a half years ago, although, at the same time, it will break the always difficult balance in the top European leadership, negotiated in July 2019, since the Socialists, who have regained ground at the political level and rule alone or in coalition in seven European Union countries, including powerful Germany, would lose one of the EU’s key positions. They do not preside over European Commission (Ursula von der Leyen, PPE), nor the European Central Bank (Christine Lagarde, PPE), nor the European Council (Charles Michel, Liberals). And to lose the European Parliament in two weeks -the vote is scheduled on January 18- they will only retain the post of High Representative for EU Foreign Policy, held by the Spanish socialist Josep Borrell.

An important setback for the Socialists who, before deciding the direction of their vote, will examine Metsola in audience. “We want to hear from the PPE candidate because some of their views are unacceptable for us ”, alleged last December the leader of the Social Democrats, Iratxe García. “We await commitments and clarifications on some important issues such as women’s rights, tax justice, the rule of law and social justice,” he said. If elected, Metsola, who would become the youngest president of the European Parliament, has promised to remain neutral on issues such as abortion, but it remains to be seen whether this promise will be enough.

And it is that, in addition to negotiating a more social political agenda that reflects the group’s priorities, the Socialists want to wrest from the popular the promise of new posts in other instances of the European Parliament that unbalance the balance in their favor.

For example, more presence at the table of the chamber with more vice-presidencies (of the 14 existing the EPP has four compared to three the Socialists and two the Liberals) and quaestors – a person responsible for administrative or economic affairs- (currently three the EPP, one the PSE and one the liberals) and even the position of secretary general. A position of great weight, responsible for managing the machinery of the camera, and in the hands of the German conservative Klaus Welle for no less than 13 years. If the socialists manage to impose their new weight political, the position could go to the hands of the German socialist Markus Winkler, deputy general secretary and former chief of staff of the former president of the European Parliament, Martin Schulz.