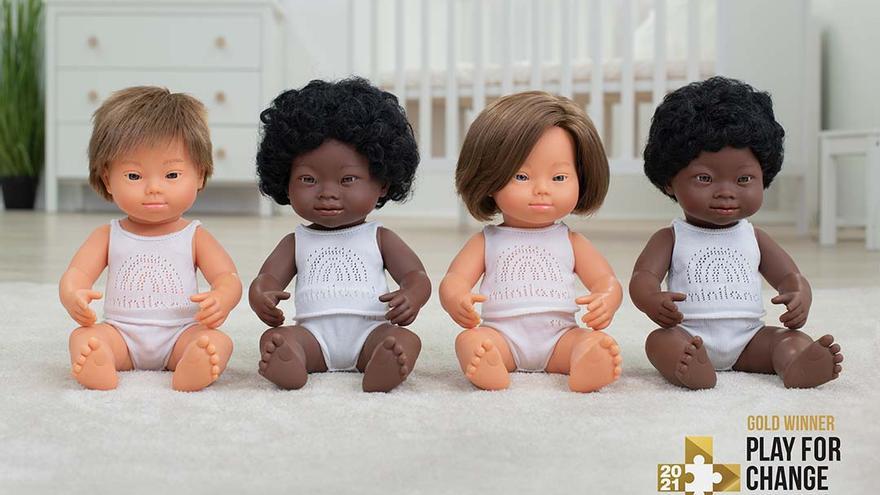 The dolls multiethnic and with Down syndrome de Miniland continue to garner awards. After receiving last year the award for Best Toy of the Year from Spanish Association of Toy Manufacturers (Aefj), now it is the European employers’ association that recognizes the initiative of the Onil firm.

Thus, Miniland Dolls have won the Gold in the category of Empowerment in the second edition of the Play for Change Awards what organizes Toy Industries of Europe (TIE). Also, your toy Amazing Inside, a stuffed animal that shows children the organs of the human body, has obtained the Bronze in the category of Future Skills, which recognizes toys that stimulate children’s abilities.

According to the company itself, this award represents a new recognition of Miniland in terms of education and “reinforces the values ​​of integration, respect and toleranceto give meaning to the entire collection of Miniland Dolls. A collection that, as they point out, was born to support diversity with dolls of different races, to which the four have joined dolls with Down syndrome (two Caucasian and two African girl and boy), thus managing to give visibility this collective.

From Miniland they have wanted to express their gratitude for this prestigious award. “Being winners of the Play for Change Awards, an initiative by the TIE, which is the voice of the most reputable Toy Manufacturers in the European Union, is an honor for Miniland. It represents a strong recognition of more than 50 years of work dedicated to children, developing toys that make a difference “, has declared Rafael Rivas, CEO of Miniland.

In the same way, the Alicante company has been recognized in this second edition of the awards with Amazing Inside, a toy from its Toys for Real Needs line, being bronze in the Future Skills category. A category that values ​​lactivities and toys that prepare children Today’s for tomorrow’s world in literacy, analytical reasoning, problem solving, adaptability, and communication and collaboration skills.

It is a toy that allows a first approach to knowing the human bodyor, through an initial exploration of our own organs, which will help the little ones to understand what is going on inside them. The game consists of removing 8 soft organs through the monster’s mouth and repositioning them in the right place on the belly. To extend the playing and learning experience, it includes some augmented reality cards, to be used with the Miniland Grow and Fun App with which children can continue learning about the human body, seeing, for example, real organs in 3D and obtaining additional information on each of them.

During the gala, which was carried out via streaming, other toy companies of the level of The LEGO Group, Mattel o Dantoy.

The jury made up of personalities such as John Baulch, Director of Toy World Magazine, Catherine Naughton, Director of EDF, Dee Saigal, Ceo and Creative Director of Erase All Kittens, Dr. Amanda Gummer, Founder of Good Play Guide, Dr. María Costa Director of AIJU Research, or Jackie Marsh, Professor of Education at the University of Sheffield, among others, have congratulated the toy manufacturers, highlighting the high level of applications this year, which have increased by 50% compared to the previous year.

Also Read  Oil mills in Alicante: who is behind the province's olive oil?