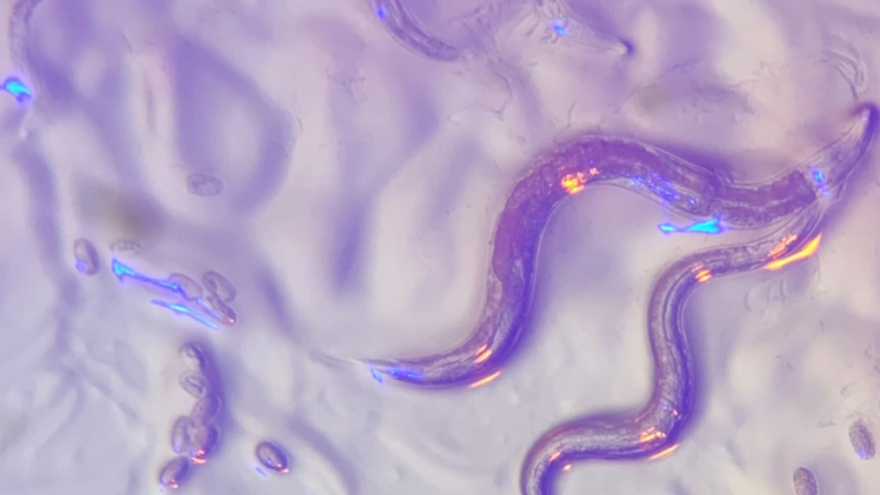 A small worm that lives in decomposed organic matter is able to perceive the blue color of a bacterium, although it does not have eyes or light-sensitive molecules.

A worm that measures one millimeter, does not have eyes or light-sensitive molecules, can, however, perceive color in a polluted environment. You don’t see it, but you feel it.

It has been discovered by an investigation by the Massachusetts Institute of Technology, which reveals unsuspected capacities in living beings as simple as the nematode Caenorhabditis elegans.

Its organic consistency is so discreet that it appears transparent, although it has many of the organs and systems of any other animal. Its half-life is three weeks.

It also behaves like any other animal, as it can smell, taste, touch and react to different temperatures and even to a flash of bright light.

Dangerous bacteria As this research has been able to verify, these worms use this ability to see without eyes to assess the risk of feeding on a potentially dangerous bacteria that secretes blue toxins.

The researchers think that this surprising ability is related to the preferences of this nematode to settle in land exposed to the sun, so they think that they may be gifted to perceive light and color in some way.

This ability is important for their survival because these nematodes basically feed on microorganisms, such as bacteria. Escherichia coli, which is part of the human biota.

Surprise in the lab

Surprise in the lab The researchers were able to verify this ability of the nematode because they identified two genes that contribute to spectral sensitivity that allow it to identify a toxic bacterium thanks to its blue color.

Previous studies had observed that this nematode, which lives in decomposing organic matter, avoids a bacterium present in these environments, called Pseudomonas aeruginosa, which is harmful (in humans it can cause pneumonia) and secretes a characteristic blue toxin.

The researchers found, first, that this nematode escapes from the decaying environment in which it lives if it is illuminated by the white light of an LED bulb.

Blue amber This showed that the worm could somehow perceive white light. In a later experiment, they also found that it was sensitive to blue light, although only if it was associated with a toxin.

That means, according to the researchers, that these worms are capable of evaluating, with such a limited sensory system, both the toxic nature of a bacterium and the color of its secretions.

Another finding obtained in this research is that the worms do not detect any chromatic scale, but can only evaluate levels of brightness and darkness.

In addition, he found that these nematodes only react to a specific type of blue, blue amber, which exhibits a rare and clear coloration and also emits a pleasant aroma.

In laboratory and in nature

In laboratory and in nature The researchers observed the behavior of this nematode, both in the laboratory and in the field, and discovered that the sensitivity to color is more intense in the specimens that live in the wild.

This is how they arrived at the final explanation for these unusual behaviors: they analyzed the genomes of both worms and discovered two specific genes (called jkk-1 and lec-3) that contribute to these variations in the ability to perceive color without any visual system. .

The researchers explain that, although the two genes perform many important functions in a variety of organisms, including humans, both are involved in molecular pathways that help cells respond to stress caused by harmful ultraviolet light.

Other animals? “We have found that the color of light in the worm’s environment can influence how the worm navigates the world,” explains one of the researchers, Dipon Ghosh, in a release.

And he adds: “Our work suggests that many genes, in addition to the two that we have already identified, can affect color sensitivity, and now we are exploring how.”

Ghosh suspects that these discoveries could be generalized to other creatures besides roundworms. At the very least, it’s clear that sensitivity to light doesn’t always require vision or eyes, he concludes.

Top photo: the nematode Caenorhabditis elegans at one point in the investigation. Credit: Eugene Lee, MIT.