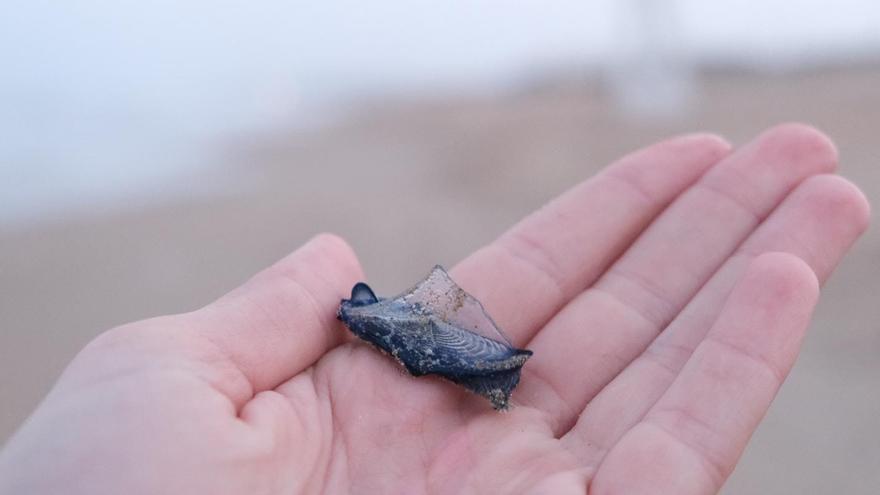 Thousands of harmless sailboat jellyfish have reached the beach of La Marina in Elche, where they are stranded in the sand and die. This species is confused with the fearsome Portuguese caravel that has forced the province’s beaches to close on several occasions and organize surveillance devices to avoid an accident due to a simple bite, which can be fatal. The sailboat is a genus of hydrozoans that live on the surface in the open sea. There is only one known species in this genus, the Velella velella, which is commonly known as sea ​​raft, purple sail or sailboat, explains the website medusas.org.

“These little cnidarians are part of a specialized community of the oceanic surfaces that also includes the best known, the Portuguese Caravel. Predator specialized in gastropod mollusks, they feed on other cnidarian. Other similar predators are the sea slug of the genus Glaucus and the snail. A sailboat, although it appears to be an individual, is a colony and is usually less than 7 cm long. They are usually deep blue in color, but its most distinctive feature it is a small candle that catches the wind and drives her on sea ​​surface. Under some wind conditions, they can be stranded on beaches. Like other cnidarians, the sailboat is a carnivorous animal. It catches its prey, usually plankton, by means of its hanging tentacles loaded with nematocytes. Even though toxins from your nematocytes they are effective in trapping their prey, the sailboat is essentially harmless to humans. ”

All cnidarians possess nematocytes. However, in some species the nematocytes and the toxins they carry are more powerful than in other species. Sailboats have nematocytes that are relatively benign to humans, although each person responds differently to contact with their toxins. In any case, it is advisable to avoid touching your face or eyes after coming into contact with a sailboat and remember that it can cause stinging in the areas of the skin exposed to this animal’s nematocytes.

Habitat and distribution of sailboat jellyfish

The sailboat lives in warm and temperate waters of all the world’s oceans. It lives in the water / wind interaction, with the sail above the water and the polyps suspended about a centimeter below. Organisms that live partially in and out of water like this are known as pleuston. Occasionally, thousands of sailboats can be found near the shore on the water’s surface.

Having no other means of locomotion other than its sail, the sailboat depends on the strongest winds to move through the seas and, in this way, they can be stranded on beaches all over the world.