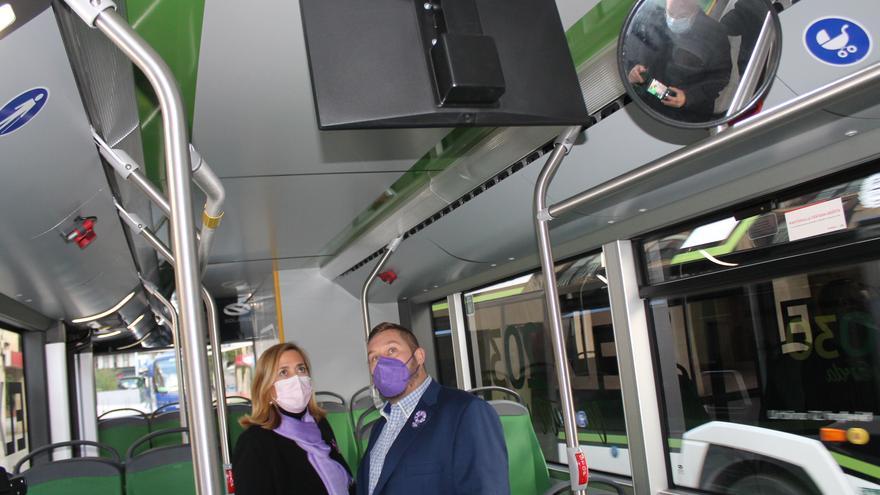 The initiative, which is actually a video of Thirty seconds with advice and empowering messages with drawings and texts by the artist Diana Raznovich, aimed at the female population that suffers gender violence, will be played from this Thursday in until seven languages –Spanish, Valencian, English, French, Arabic, Romanian and Russian– on the screens of urban buses in Elche until the end of the year. In its first phase, some 40,000 people from Elche, who are estimated to use this public transport on a daily basis, will be able to view the recording during their trips by the vehicles of Autobuses Urbanos de Elche (Auesa), the transport concessionaire.

The Deputy Mayor for Equality of the Elche City Council, Mariano Valera, and the subdelegate of the Government in Alicante, Araceli Poblador, have shown the audiovisual piece – accompanied by the head of the Violence against Women Unit of the Subdelegation, Modes Salazar, and the manager of Auesa, Ángel Andreu– which, as of 2022, will also be taken to schools and institutes in a more extensive format, in addition to the entities of the Municipal Council for Women and for Gender Equality.

“We want the video to reach to all the women who need help”, Said Valera after thanking the Subdelegation for the initiative and Auesa for its collaboration. “From the Department of Equality we do not hesitate to adhere to this action,” he stressed. The mayor, who has regretted the 1,118 murdered since 2003 up to the present time “due to the fact of being a woman”, she has regretted that in a democratic society gender violence still exists: “As it is inadmissible, we have to work and develop strategies to stop it.”

For her part, the Government sub-delegate has stressed that the video-manual is “a useful, friendly and simple tool to help the victims of this problem ”. Poblador explained that this campaign is already underway at the Alicante-Elche airport and that it has been produced in several languages ​​“because this province is heavily traveled by foreign and migrant women. We want them to know that they are not alone, that the State has the obligation to assist them ”as the Spanish Government is“ firmly committed ”to the fight against gender violence.

Although the subdelegate has acknowledged that “There is work to be done”, has emphasized that Spain “is an example” thanks to the Comprehensive Law against Gender Violence of 2004 or the State Pact, in which more than 1,000 million euros have been invested in the last five years. “Efforts are not enough as long as there is a single victim,” he said.

Mariano Valera has concluded by stating that “Not a single euro destined to stop this scourge is a waste”, and has reiterated that the council will continue preventive efforts against gender violence in educational centers: “Because in the end we understand that we must put the focus where the consciences of tomorrow are being generated,” he added.

In Spain, so far in 2021, there have been 37 deaths due to sexist violence, two of them in the province of Alicante, in Torrevieja and La Vila. 016 is a free and anonymous phone.