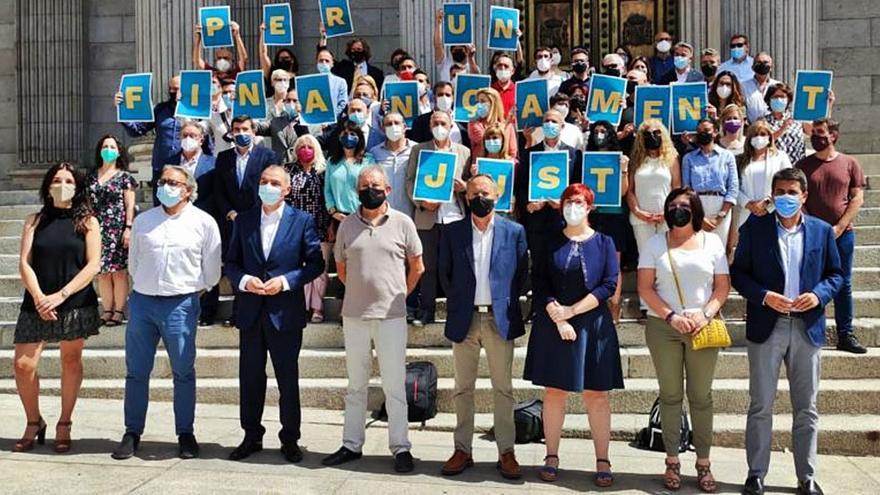 The truth is neither the 2002 model of the PP, nor the 2009 model of the PSOE have resolved the marginalization suffered by this autonomy. The Valencian Community has a structural problem that generates serious consequences for its economic and social development. All political parties agree that the current system weighs on this territory as it is the one with the worst financing per capita in all of Spain, which translates into worse public services. In this context, all eyes were fixed on Saturday at the PP regional convention to see if Genoa offered a forceful formula to seek fairer criteria. It is true that Pablo Casado addressed the issue but his way of doing it did not leave anyone indifferent. In the first place, he promised to change the autonomous financing model of Spain, understanding that the current 2009 model promoted by Zapatero “no longer works”, which is why he said that the PP model is from 2002, which, in his opinion, is based on the “Adaptation and renewal factor” because it dealt with “underfunded communities” and said that “there are more demographics than the system recognizes”, and where “each citizen has less funds to cover their basic services”, a situation that also affects Murcia. In 2002, the Community was six points below the average and was already losing the game with the rest of the autonomies. The problem lasted in subsequent years, even being 12 points below the national average.

José Luis Rodríguez Zapatero included in 2009 several aspects that improved the previous formula by incorporating a volume of additional resources. The population was also updated, since the distribution between 2002 and 2008 included the inhabitants of 1999 and it was not taken into account that the increase in the census in some autonomies, such as the Valencian Community, generated new spending needs that were not covered . But still updating the criteria, the Community continued to be the one that received the least resources per inhabitant. In these moments, every Valencian perceives 237 euros less than the state average, or 839 less than the best financed autonomy, which is equivalent to 10% and 29% less resources, respectively. And it is that Valencians are facing the health and economic crisis generated by the pandemic with a backpack loaded with discrimination. While other autonomous regions such as Cantabria or Galicia have always enjoyed a very advantageous system to feed their coffers, the Valencian region has had a much lower volume of funds. Aware of the importance of this matter, Carlos Mazón has joined the rest of the parties to demand equity. However, the proposal that Pablo Casado made on Saturday left the new regional president at the feet of the horses. Asked about this issue, Mazón did not want to make any statements and his team hid behind the fact that “what Casado wanted to say is that we must return to the 2002 model in terms of consensus.” But this explanation was not convincing for the political groups that launched yesterday in a whirlwind against the PP to brand Pablo Casado’s proposal as “clumsiness, mockery or no one”. The Socialists asked him to side with the Government of Pedro Sanchez in order to achieve a system that would amend “the prejudices that the PP caused to this land” and from Compromís and Podem they also accused it of wanting to destroy the Valencian self-government and of anchoring itself in a harmful model. Ciudadanos, with whom the PP governs in the Diputación, insisted on knowing Mazón’s position and positioned itself against the Aznar model and also against the Rodríguez Zapatero model.