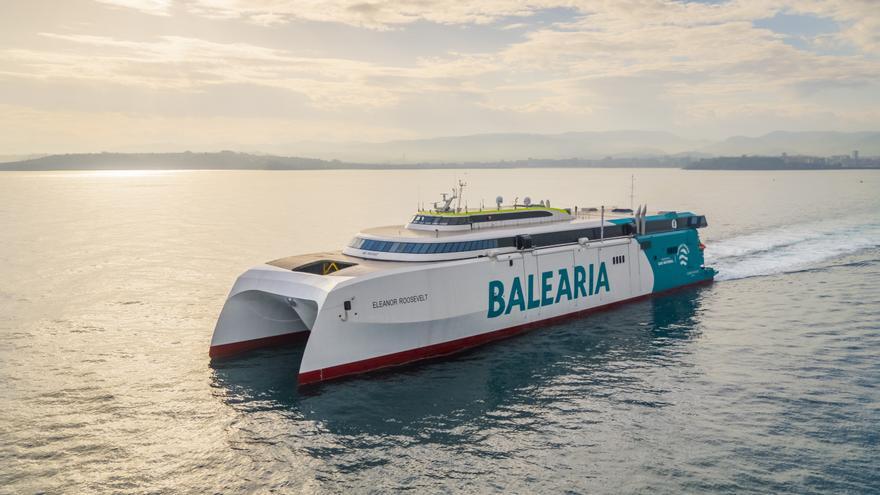 Baleària will allocate its new flagship, the Eleanor Roosevelt, the the world’s first fast ferry with natural gas engines, to cover the route between Dénia, Ibiza and Palma de Mallorca As of next April, as reported this Thursday by the shipping company chaired by Adolfo Utor. The company has invested 90 million euros in this fast ferry with capacity for 1,200 passengers and 450 cars, which becomes the spearhead of the firm’s sustainability policy.

“We are betting on the Balearic Islands as a destination with our new flagship, a pioneering fast ferry worldwide in terms of sustainability and innovation”, highlighted Utor, who recalls that 20 years ago the company already “revolutionized” the Dénia-Ibiza-Palma route by incorporating the high speed and now it intends to do the same “with a ship that, in addition to being fast, is eco-efficient Y smart“.

The firm emphasizes that comfort and safety have been prioritized in the design of the ship. On the one hand, the interiors have been adapted to the current context, considering the distance between seats and wider corridors and spaces. On the other hand, the new catamaran has high-tech innovations that considerably reduce movement, vibrations and noise, in benefit of the comfort of the passengers during the crossing.

The technology It is also a differentiating element of the services of this green and smart ship, which include a free platform for digital entertainment (series, cinema, games and press), video surveillance of pets through webcams or the Internet and WhatsApp coverage for text messages throughout the voyage. The digitization of the entrances will facilitate the maintenance of the safety distances: the passengers will receive the boarding pass through WhatsApp, with the indication of the assigned seat.

Access to the passenger area is through a mechanical stair or lift and all the seats on the ship are reclining, both unusual elements in high-speed ships. The Eleanor Roosevelt has several coffee shops, as well as a food truck on the outside deck and a children’s area. The catamaran has three VIP lounges with panoramic smart glass windows that adapt to the lighting conditions.

The ship is in the final phase of construction and testing of the equipment in the Armon shipyard in Gijón. In a few weeks, it will sail in the Balearic Islands and will be the seventh in Baleària’s fleet to use natural gas as fuel, which reduces polluting emissions. It should be remembered that in 2020 the shipping company stopped emitting 37,000 tons of CO2 thanks to its gas fleet. It is estimated that each year the Eleanor Roosevelt will reduce CO2 emissions equivalent to eliminating more than 8,900 conventional passenger cars or planting almost 27,000 trees. The actual fuel consumption and the efficiency of the engines will be monitored thanks to the measurement equipment and sensors installed on board, within the framework of a project co-financed by CEF funds from the European Commission.

Baleària is the leading shipping company in the transport of passengers and cargo in connections with the Balearic Islands, and also links Ceuta, Melilla and the Canary Islands with the peninsula. Internationally, it offers services in Morocco, Algeria and the Caribbean (between the United States and the Bahamas). The company suffered last year from the impact of the pandemic, which reduced its turnover to 342 million euros, which represents a decrease of 24% compared to 2019. The firm presented some losses of 15 million.