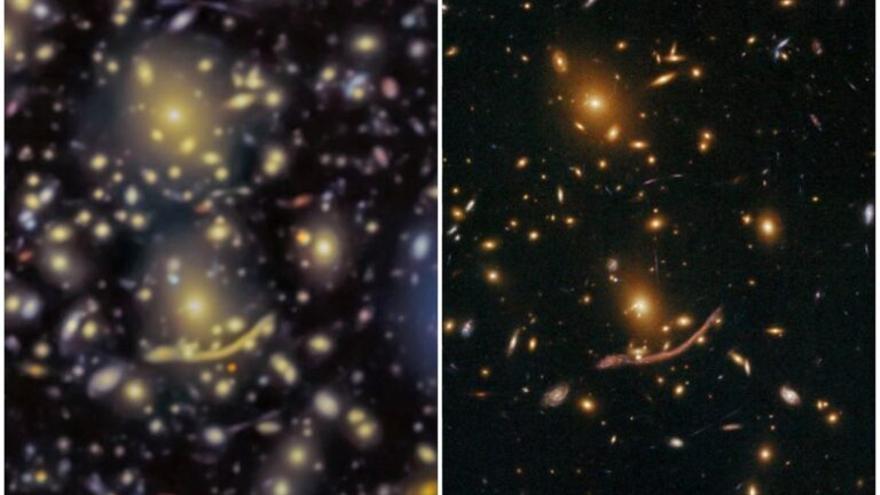 Thanks to the most powerful telescopes in the world, astronomers verified that the first galaxies in our universe were surely formed in the midst of great confusion.

Until now, astronomers have not been able to figure out how and when the first galaxies formed and have thought that such birth could have occurred in two different scenarios.

In the first scenario, the galaxies originated in large conglomerates of cosmic gas and dust: they rotated slowly, fragmenting into turbulent vortices and condensing into stars that ended up surrounded by planets.

In the second scenario, the picture is more chaotic: galaxy formation was more violent and discontinuous, with intense but short-lived starbursts of star formation triggered by turbulent cosmic events and increased gas accumulation.

Proven frenzy A new investigation, led by the Center for Astrobiology of Spain (CAB, CSIC-INTA), and in which the Institute of Astrophysics of the Canary Islands (IAC) also participated, in collaboration with researchers from the United Kingdom, Mexico and Chile, has arrived to the conclusion that the formation of galaxies was turbulent, as assumed by the second scenario.

He has verified this by analyzing highly detailed and unpublished images of some of the smallest and dimmest galaxies in our neighborhood.

Used incredibly accurate data collected as part of the project Survey for high-z Red and Dead Sources (Shards) carried out at the Gran Telescopio Canarias (GTC), located on the island of Palma, right where now the Cumbre Vieja volcano is erupting. The project has also been supported by observations made by the Hubble Space Telescope (HST).

The researchers combined the power of these advanced telescopes with the information provided by “natural telescopes.”

Natural telescopes form in the universe because some galaxy clusters contain so much mass that they bend space-time and originate the so-called gravitational lenses.

Cosmic magnifying glass These lenses are formed when light from distant and bright objects, such as quasars, bends around a massive object, located between the emitting object and the receiver: it causes an apparent displacement of their positions and distorts the images received by the observer. .

In this way, it is possible to see faint and distant galaxies with greater brightness, because they appear to be closer: the gravitational lens warps and amplifies the image of distant galaxies producing double or multiple images difficult to reach by telescopes, as well as reflections of worlds beyond the Milky Way.

That is why gravitational lenses are also called natural telescopes, because they provide astronomers with a kind of magnifying glass built by the universe itself.

Together, these telescopes allowed astronomers to detect the hot gas characteristic of newly formed stars in these faint and distant galaxies.

This hot gas emits at certain wavelengths. Analysis of these particular emission lines provided the researchers with information about the formation and evolution of the galaxy.

The researchers concluded that the onset of galaxy formation must have been irregular, with sporadic bursts of activity and incredibly large star births, capable of warping the galaxy itself and stopping its activity for a time or even forever.

However, it is still not very clear why the formation of the first galaxies followed that cosmic frenzy, astronomers acknowledge.

Alternative causes As they consider it unlikely that the mergers of galaxies played a substantial role in triggering the bursts of activity that originated the galaxies, they are looking for alternative causes that may be at the origin of the accumulation of the primordial gases, a question that still remains. pending resolution.

The researchers clarify that they did not directly study the first galaxies that emerged in our Universe, something they do not renounce either.

“For that we will have to wait for the launch of the James Webb space telescope,” said Alex Griffiths, a researcher at the University of Nottingham (United Kingdom), in a release.

It clarifies that the luminosity of these galaxies is too low to be accessible to other instruments that do not have the Webb’s capability.

The James Webb space telescope is the largest in the history of astronomy and 17 countries participate in its development. It will be operated jointly by NASA, the European Space Agency and the Canadian Space Agency, to replace the Hubble and Spitzer telescopes.

NASA plans to launch it next December and thinks it will fundamentally alter our understanding of the universe – it will also allow us to finally observe how the first galaxies formed.

Top image: The center of the galactic cluster Abell 370, located 6 million light years from Earth, as seen by GTC (left) and Hubble (right). The Hubble data have better spatial resolution because they are not affected by turbulence in the atmosphere. The GTC data is even deeper, revealing the existence of some previously unknown galaxies and not detected by Hubble. Credit: GRANTECAN / HST.