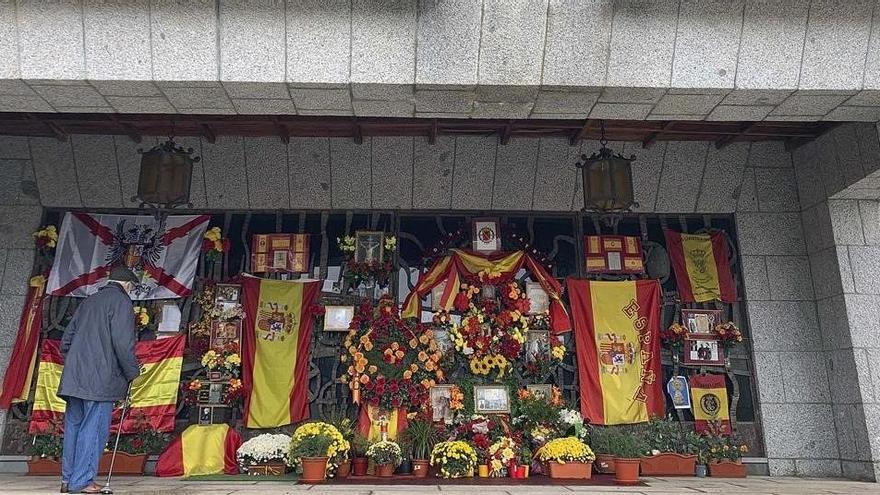 The enclosure is open from 10 to 17, open the door for any visit, “no more than three a day on weekdays”, clarifies a street sweeper, the only everyday passerby of the place.

Upon entering, to the left, Franco rests. The gate and the arcade of this pantheon of iron, glass and granite are filled from floor to ceiling with red and yellow flags, stickers, religious stamps, plastic flowers and military emblems; even a double-headed eagle of the Habsburgs. But all that imagery does not spread an inch beyond the space that is considered private.

The worst forecasts of the Government regarding the exhumation of Franco have not been fulfilled: protests in the Valley of the Fallen or in Mingorrubio, or that the new burial hosted acts of exaltation of “the military uprising, the Civil War and the repression of the Dictatorship”, as the Law of Historical Memory says.

But, as advisers from the then Minister of Justice Dolores Delgado, the Franco regime has ended up turning the new tomb into an altar; almost no faithful, but altar.

The place will take place this November 20 “uniformed police presence”, confirm sources of the Ministry of the Interior. The Police have also activated a device for information work.

The accumulation of military logos on the grave is striking. There are from the Legion, the Parachute Brigade, the Infantry, the Artillery, the Reserve and Security Group of the Civil Guard and even the little military National Police.

In Interior they do not comment on this abuse of public emblems, but they do comment on the absence of police in the cemetery on days that are not 20-N: “It was never intended to maintain a permanent presence”.

In the summer of 2019, the tense negotiation of the Government with the representative of the Franco, the lawyer Felipe Utrera Molina, it included the demand of the family that the place be guarded so that the tomb would not be desecrated.

And at the beginning it was like that. A police patrol guarded the cemetery the first days. But the absence of incidents led the Madrid Headquarters to “not dedicate more fixed resources” to the point. Now that surveillance, except for 20-N, is carried out by the Citizen Security patrols passing by from time to time.

Flags They proliferate today much more on the balconies of El Pardo than on October 24, 2019, when Franco was exhumed and his remains reached that district of Madrid. It is because of the covid, which has seeded many other windows in the city.

El Pardo is still a very reddish place. There are barracks of the Army, the Civil Guard and the Royal Guard there. Jogging soldiers flank the visitor on the sidewalks, between avenues and houses built in the postwar period by the General Directorate of Devastated Regions.

On Calle de los Caballeros, in the bar la Pepenúltima, the neighborhood has placed flags of Spain on the façade, a purple banner of Felipe VI with the acronym GREEN (Long live the King of Spain), another of the military order of Montesa, the Burgundy cross and a double-headed and imperial eagle.

Inside the fried blood sausage and grilled chorizo ​​parade under a special poster: a poster of “will enjoy a lot eating Padrón peppers (sic)”, a diploma awarded by the Civil Guard to Rosita, the owner, for complying with discipline in the confinement in March, and a red and yellow scarf with the sign: “This is Spain and who does not like it to leave.”

On Tuesday 17, the morning after the Hungarian and Polish governments vetoed the EU recovery fund, the Church celebrated the solidarity saint Elizabeth of Hungary. And the Benedictines who still live in the Valley of the Fallen remembered her in their daily eleven-hour mass in the depths of the basilica carved into the rock. Five friars and Prior Santiago Cantera co-officiated, four altar boys with black masks and the children of the choir singing in the background.

It was Tuesday, the first working day on which the burial of 34,000 dead from the Civil War can be visited. It began the week before November 20, the moment when the Francisco Franco Foundation used to warm up its engines, calling to remember the death of its mentor. This year, the start has been the traditional publication of a reminder among the obituaries of the ABC, on Sunday 15. Only that next to the general’s box was Peter Stutcliffe’s obituary this time, the Yorkshire Ripper.

At the start of the week, at the foot of the altar of the basilica, on the granite headstone of the tomb of José Antonio Primo de Rivera they have been placed three bouquets of red roses, five per branch, in pure Falangist orthodoxy. After mass, nothing, not even the glances of the few people, settled on the black Biscayan marble that, on the other side of the altar, has covered Franco’s old grave for 13 months.

Only a dozen faithful heard the prayers, one of them so that “the destiny of Spain is preserved under the protection of the holy Church and its holy law and with the intercession of the blessed whose relics we safeguard “, read the concelebrant.

The next prayer, common in all the masses of that huge tomb, was “for the fallen, so that they rest eternally and their memory preserves peace among the Spanish “.

Even before the confinement, the Civil Guard reduced the surveillance of Cuelgamuros. Now there is only one detachment, a couple from the San Lorenzo de El Escorial house-barracks, although sources from the Madrid Command clarify that for this 20-N surveillance is increased in anticipation of incidents. The Falange has summoned its followers to show their teeth before the exhumation plans of its founder.

The armed institute came to deploy 40 agents in perimeter security and the venue during the days prior to Franco’s transfer. The device grew in October 2019 as the historic day approached.

In the command of the Civil Guard of Madrid they assure that today the valley is in “absolute calm”. La Benemérita has not registered any incidents, apart from those already known on the dates prior to the exhumation, small protests at the gates of the Valley lit by Francoists demanding: “We want to go to mass!”

The same sources They even rule out that this time the 21-gun salute is repeated – actually 21 rockets of txupinazo – that two members of the extreme right launched from a nearby rocky area last year to honor the dictator.

Behind the large cross, the friars’ inn is locked up, and the pinillos are dried in the flowerpots on the door of their restaurant. The Government took advantage of the confinement to keep the bolt locked. In the neighboring convent, its inhabitants still do not receive public funds until the Treasury considers its expenses justified. Only a self-absorbed gardener of National Heritage walks the esplanade, cornering the dry leaves with his blower.

The souvenir shop is closed at the door of the basilica del Valle. Behind the glass are nativity scenes, badges, T-shirts of the “Royal Sites” and table-top holy crosses.

The store closed in March, due to the covid, and has not reopened. The same has happened in other monuments. The Heritage workers and the watchmen of the firm CMM Guard shrug their shoulders: the store is not public; was outsourced to Palaces and Museums, a subsidiary of Aldeasa, privatized and today owned by the World Duty Free Group, the Benetton family.

An air of provisionality takes possession of the solitary Cuelgamuros. The funicular that went up to the cross does not work, nor are the cafeterias open. “Everything is closed, ”says a doorman. There is only one open toilet, and because the law requires it, if not … ”