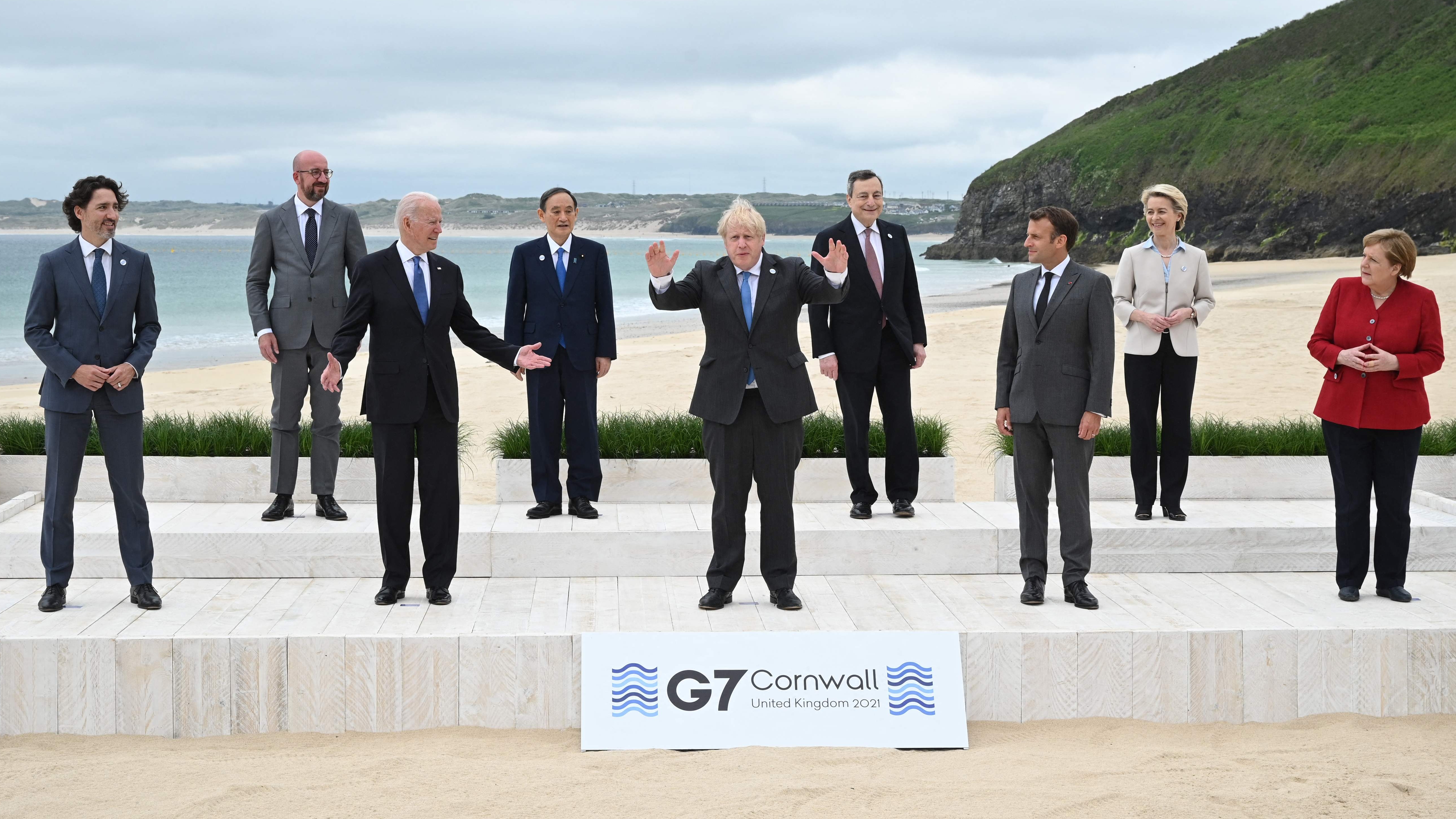 The leaders of the seven richest nations on the planet arrived this Friday in the British coastal region of Cornwall – Joe Biden went ahead, and landed in the United Kingdom a day before – with the feeling that this summit will be more relevant and less showcase than previous encounters. It is the first time they will see each other in person in almost two years, since the August 2019 meeting in Biarritz. In that interval, the world has been rocked by a pandemic that has left almost four million deaths in its wake. The preparatory documents for the meeting already use a term, the “Cornish consensus”, as opposed to the “Washington consensus” that for three decades gave a free bar to multinationals in a globalized world while tightening the noose of financial orthodoxy to countries with more problems.

‘Build Back Better’ (Rebuild better) is the slogan chosen for a summit that wants to take advantage of the seismic upheaval caused by the coronavirus, and the new airs of collaboration that arrive from the other side of the Atlantic with the current US administration, to promote ideas and objectives that, in recent years, They had not gone beyond the academic realm or the politics of good intentions. “We are entering a period in which the dilemma between democracy and authoritarianism must be resolved,” explained a senior official in the Biden Government in the hours before the Cornwall meeting. “We believe that we can show that we are united in our response, and thus prove that democracy and our shared values ​​are the best way to deliver results to our citizens and to rise to the current global challenges.” Faced with the challenge of a power like China, origin and rival in the pandemic crisis – and the priority obsession of the new occupant of the White House – the G-7 leaders have conspired to deny the “de-westernization” of the world that they denounced the 2020 Munich Security Conference and show that liberal democracies still have a lot to say.

During the opening speech of the summit, Boris Johnson told the rest of the heads of government and state: “What has gone wrong during this pandemic, and threatens to be a lasting scar, are all the inequalities that have entrenched themselves. We therefore need to ensure that, as we recover, we can balance that recovery across societies. We need to be able to rebuild better ”.

Deeds have preceded good words. The decision of the finance ministers, earlier this month in London, to promote a minimum corporate tax of “at least 15%”, to finally put an end to the tax evasion of the technological giants, was the demonstration of that something has started. The commitment, which the G-7 plans to announce in its conclusions, to distribute one billion vaccines among the poorest nations seeks to spread the message that the way out of the crisis must be joint and in solidarity. “Without any counterpart or requirement,” Biden said Thursday from the town of St. Ives. “It is about our responsibility, our humanitarian obligation to save as many lives as possible,” he continued, after recalling that the United States had already pledged to provide 5 billion of those doses for its part.

The list of goals put forward by the G-7 is ambitious enough that the leaders gathered in Cornwall cannot afford to muddle through with a mere declaration of good intentions: the fight against the pandemic; a homogeneous response to the challenges posed by Russia or China; the coordination of policies to achieve the desired economic recovery as soon as possible; and a renewed drive to face the great global challenge whose urgency to respond has accelerated the coronavirus crisis: the fight against climate change.

Brexit in the world

The summit is also presented as the occasion for Boris Johnson to demonstrate that the United Kingdom after Brexit is a relevant player on the international scene. The prime minister has prepared everything to show the world the kindest side, the soft power British (soft power) that is still attractive to millions of people. And the best claim is still the House of Windsor. Queen Elizabeth II, Prince Charles of England and his wife, Camilla Parker Bowls, and the Duke and Duchess of Cambridge, William and Kate, offered their guests a special dinner and reception at the Eden Project on Friday, immense glass domes in the town of Bodelva that host the largest greenhouse tropical forest that exists. Grilled turbot from the Cornish coasts with local potatoes, pavlova cake with strawberries from England and local cheeses. A menu and an environment, the westernmost coast of the island, which belies any prejudice about British gastronomy or tourism.

Every face has its cross, and Johnson could not prevent some shadows from covering the match. Washington has wanted to warn the British Prime Minister, hours before Biden’s arrival, that it expects a prompt resolution of the crisis in Northern Ireland, and has demanded the British politician’s commitment to stability and peace in the area. France, Germany and the EU reach the summit with the undisguised irritation towards London, for the breach of an international treaty, the Irish Protocol, which took years of negotiation to be able to unravel Brexit. And the Parliament of Westminster, in a unanimous condemnation that was not more serious because the Government prevented the vote, has drawn the colors by reminding it that the United Kingdom will be the only G-7 country that has decided, in these exceptional historical circumstances, cut its budget aid to the countries most in need.

Cornwall is not spared from protests and criticism

The small town of Carbis Bay, where the G-7 summit is held, has become a fortress paradise. More than 5,500 police officers posted from across the UK have created an impassable security perimeter. The armed forces, with personnel, helicopters and ships that monitor from the coast, have joined the effort. The Boris Johnson government has made an effort to ensure the safety of the event, but has not been able to avoid avoiding criticism or protests of an event that was intended to be the British showcase to the rest of the world. Hundreds of protesters from the Extinction Rebellion organization, which already caused chaos in the streets of London more than a year ago, have concentrated these days on nearby beaches to demand greater force from the heads of State and Government of the most important nations. rich in the fight against climate change. “We already know that we cannot trust world leaders. They already failed in [la cumbre de] Paris. They are part of a broken system, but humanity is not broken ”, said one of the founders of the movement, Gail Bradbrook, at the presentation of the Cornwall protest, baptized with the slogan Sound the Alarm.
The main criticisms of the summit come from those organizations to which the commitment announced by the G-7 to distribute the vaccine against covid-19 around the world seems slow and insufficient. The summit wants to establish a commitment to distribute one billion doses among the poorest countries, but the announced deadlines extend until the end of the year 2022. Johnson, for example, has already announced that the United Kingdom will contribute one hundred million doses, but the reality is that the amount planned for September is reduced to five million. “This summit will ultimately be judged on its ability to impose a global vaccination financial plan, while the pandemic continues to unfold,” said Kirsty McNeill, from Save The Children organization. “It is not yet clear whether Johnson will lead the G-7 in this endeavor or just play host.”
Oxfam members have also protested, wearing masks of each of the summit leaders, against the lack of agreement to liberalize vaccine patents. “Macron and Biden agree to share the patent and allow countries such as South Africa or India to manufacture it, while Germany, the United Kingdom and the rest of the G-7 have opposed this measure,” the policy director denounced. from Oxfam, Max Lawson.