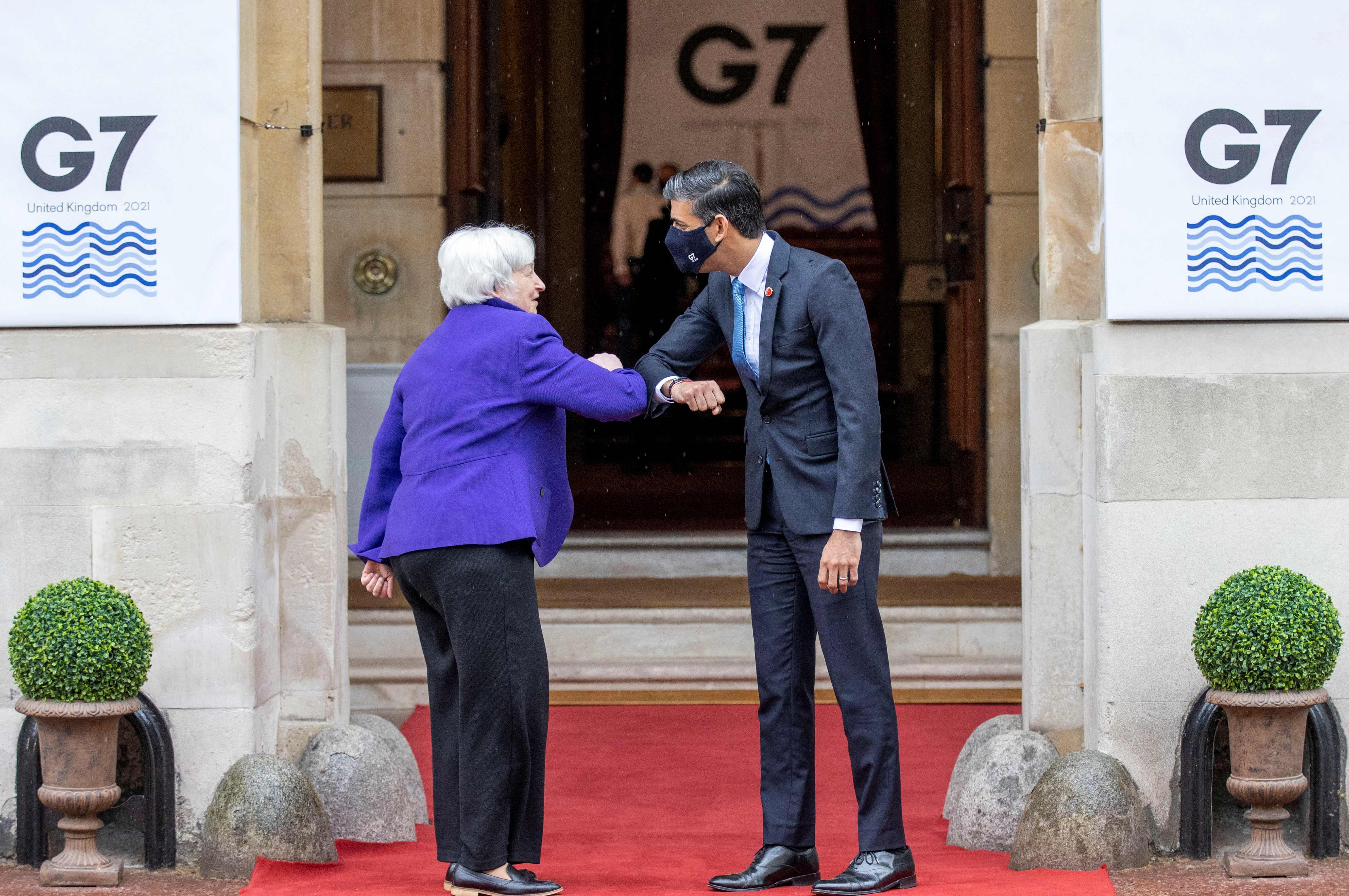 The world’s most developed economies, gathered in the G-7, reached a “historic” agreement in London on Saturday on the reform of the global tax system, according to the British Finance Minister, Rishi Sunak. The deal will require multinational tech giants to make their fiscal contribution, indicated in his Twitter account. Some details of the pact are yet to be known. In any case, it has already advanced the resolution of one of the last minute pitfalls, when speaking of a minimum corporate tax of “at least 15%”. This opens space for a subsequent negotiation to raise the figure, as some countries wish.

“My finance counterparts and I have reached a historic agreement on the global tax reform that requires the largest multinational technology giants to pay their fair share of taxes,” explained Sunak on the social network, where he has advanced a part of what agreed at the meeting, held at the Lancaster House palace in central London. “The G7 has agreed on the principle of a worldwide minimum corporate tax for large companies of at least 15%, which would be applied in each country, thus creating more equitable conditions for British companies and to fight tax evasion. prosecutor, “Sunak said.

The G-7 ministers (United States, United Kingdom, Germany, France, Canada, Italy and Japan) agreed to this minimum of 15%, although the pact will be analyzed at the meeting of finance ministers of the G-20 – developed countries and countries. emerging – and central bank governors to be held in July in Venice.

The progress in the measure is also linked to the elimination of the tax on digital services that some countries, such as the United Kingdom or France, had unilaterally imposed with the opposition of Washington. “We will facilitate proper coordination between the application of the new international tax regulations and the removal of all taxes on digital services, and other similar relevant measures, on all companies. We are committed to a global minimum tax of at least 15%, applied by each country “, states the text resulting from the meeting. The United States wanted the immediate elimination of the digital tax, but its European allies feared that in this way big technology would pay less, while the US Congress would still take time to pass the legislation derived from the new agreement.

🚨 At the @ G7 in London today, my finance counterparts and I have come to a historic agreement on global tax reform requiring the largest multinational tech giants to pay their fair share of tax in the UK.

👇The thread below explains exactly what this means. # G7UK pic.twitter.com/HdcK1HuM91

The pact is designed to adapt the tax system to the global digital age. “It is crucial to ensure that it is fair, so that the right companies [los gigantes tecnológicos] They pay the right tax in the right place and that is a huge price for the British taxpayer, ”added the British Finance Minister on an issue that has been debated for the last decade but without reaching consensus. Up to now.

The enormous public spending with which countries have had to respond to the onslaught of the pandemic has accelerated debates that dragged on for years. Specifically, that of the need for a fair and efficient tax system in the era of the digital economy. The G-7 Finance Ministers, meeting since Friday in London, were already optimistic from the start of the meeting.

The London meeting is the first face-to-face meeting of those responsible for Finance from the seven most advanced economies in the world since the coronavirus crisis ended the large face-to-face meetings. Before beginning an intense discussion, its participants read on Friday the open letter signed by the ministers of the four largest economies in the eurozone, published in EL PAÍS and the main European newspapers.

“The dumping Prosecutor cannot be an option in Europe or in any country in the world ”, the Spanish Nadia Calviño, the French Bruno Le Maire, the German Olaf Scholz and the Italian Daniele Franco stated in the text. “This practice would only lead to an even greater drop in corporate tax collection, more inequality and the inability to finance basic public services.” The four denounced the practice carried out by large technology companies of shifting their global profits to those territories – Ireland, for example – that offer them greater tax advantages. This despite the fact that its presence is already global, and its sales and benefits are particular in each specific country.

The conviction that today more than ever tax coordination is necessary to avoid the existence of winners and losers in the new digital economy has generated in a few months the consensus that was pursued without success for years. It was the new US Administration of Joe Biden that put the 15% figure on the table – although it initially proposed 21%.