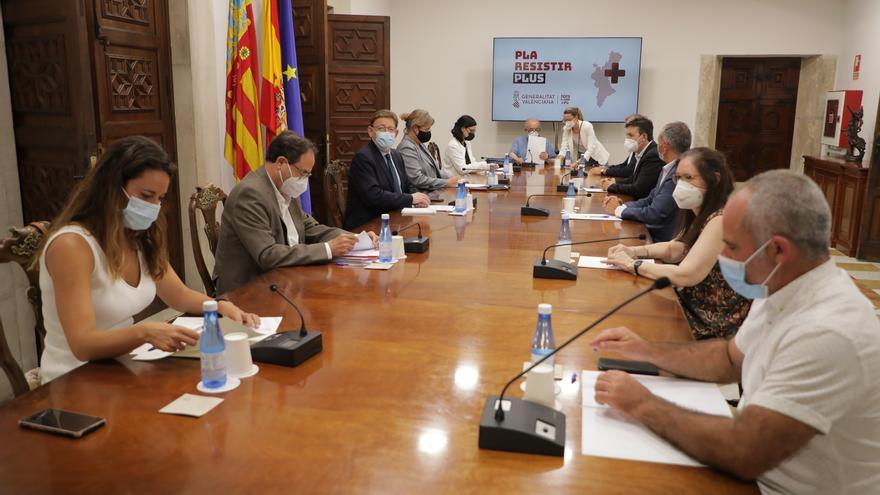 The Generalitat opens its hand with the helps for companies affected by the crisis and will allow all kinds of companies can apply for subsidies, regardless of the sector to which they belong. In addition, the application may also include fixed costs that have already been paid and not only those that appear as debt, as happened until now, provided that they have caused losses.

This was announced this Monday by the president of the Generalitat, Ximo Puig, after meeting with representatives of the Business Confederation of the Valencian Community (CEV), the Spanish Confederation of Small and Medium Enterprises (Cepyme), the Association of Self-Employed Workers of the Valencian Community (they), the Business Union of the Province of Alicante (Uepal) and the Union of Associations of Self-Employed Workers and Entrepreneurs (uatar), which was also attended by the Minister of Finance and Economic Model, Vicent Soler.

In this way, Puig has advanced that there will be a second call for the Resistir Plus Plan, in which the access criteria will be relaxed, with the aim of exhausting the 647 million budget available to this initiative, which is nourished by central government funds.

The first thing that is removed is the obligation to belong to one of the 188 CNAE that had been initially defined and that included those sectors hardest hit by the consequences of the pandemic. From now on, any self-employed person or business that pays by modules, regardless of the activity carried out, and companies that pay taxes by direct estimation that demonstrate a drop in income of more than 30% during the past year will be able to access.

Also Read  Less coffee in Colombia and more avocados in Mexico: how climate change will impact some key crops in the world

Likewise, in this second call for aid, the eligible expenditure criteria, in such a way that fixed costs may be included, regardless of whether they have been paid or are in debt, provided that these fixed costs have caused the company’s entry into losses.

It should be noted that this second call they will be able to present themselves all those companies that have already formalized their application in the first one, as long as in the resolution of the aid they had not already obtained the maximum amount established of 3,000 euros, in the case of natural and legal persons who pay tax by modules, and of 200,000 euros in the case of companies that are taxed by direct estimation.

With the new call, the Generalitat intends to fully distribute among Valencian companies the 647 million euros available in the Resistir Plus Plan in order to guarantee liquidity and business solvency of the productive fabric, and especially that of those sectors most affected by the pandemic.

It should be remembered that the Ministry of Finance and Economic Model has already resolved the first 7.4 million direct aid of the first phase of the Resistir Plus Plan, from which 2,627 companies that had requested their help in this phase will benefit. The first resolved files represent 54.27% of the total of formalized requests that have been registered for the first phase of the process, so the remaining 45.73% will be resolved in the coming days.

These first aid are aimed at the self-employed and self-employed who pay under the objective estimation regime or modules; to newly created companies in 2019, as well as to those businesses that have made changes to the trading company.

Also Read  Guterres: "The economic and social agents are the ones who will make us win or not the war against climate change"

87% of the approved files have been for an amount of 3,000 euros, that is, the maximum amount that could be requested in this phase, and the remaining 13% (345 files of a total of 2,627) have been for a lower amount, when registering applicants for outstanding debts for an amount less than the established maximum.