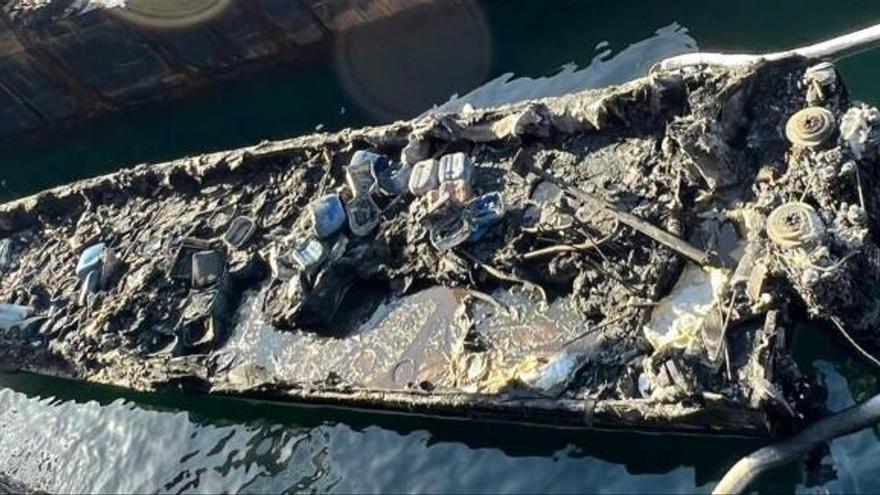 The glider that burned on saturday night for Sunday against a shipyard de Meira, in the industrial area of ​​O Cocho, in Galicia, was about 10 meters long and had up to three outboard motors and is a speedboat known as “shoe”which can reach high speeds. This model of boat is frequent in Sanxenxo, Portonovo or Vilagarcía, even for shellfish, with some incursion in the estuary of Vigo, although not with this type of engines, but for the capture of scallop.

On Monday, it was still anchored next to the wharf of the shipyard Industrias Navales A Xunqueira, next to the ship for scrapping that was also affected by the flames. Surrounded by a spill containment network, investigators from the Judicial Police worked on the boat during the morning to try to clarify what happened, with the difficulties involved in the fact that it is completely burned and fingerprints cannot be taken. The Central Operative Unit (UCO) of the Civil Guard took charge of the case and the hypothesis that it is related to a discharge of way.

The main line of open research works on the boat was ready to go to pick up drugs or other types of illegal merchandise from a ship quite far from the coast, hence it was loaded with dozens of bottles of gasoline, to guarantee autonomy throughout the journey. In fact, on Monday there were more than 20 gasoline bottles totally visible, despite the hours under the flames since many of them melted with the deflagration. Everything points, therefore, to the fact that the fire was caused by an accident, and not intentionally, as was feared during the work on the first night.

The suspicions among the researchers also jumped because some 15 minutes before the fire Civil Guard was alerted to a false suicide attempt on the bridge of Rande, call that could be a distraction maneuver.

The ship also had a metal turret for communications and double hull, which prevented it from sinking despite receiving many liters of water during the intervention of the firefighters. Already that first morning, many gasoline bottles were visible floating inside the boat.

From the shipyard, which explained that the ship was not in front of its facilities on Saturday when the work shift ended, they point out that they haven’t had operational security cameras for more than two years because of a change in the regulations that prevents him from installing them at a height of 12 meters, as they were before. “If we lower them to three meters they don’t make sense because they would record the metal pieces all the time,” they point out.

As Faro de Vigo has learned, the garments that the Civil Guard agents collected on the way up to A Peregrina the night of the event were waterproof clothing. Workers in the area assure that it was not thrown away in previous days, so suspected of belonging to the occupant(s) of the glider that, after the fire, he would escape from the place before the emergency teams arrived.

The first to see the column of smoke was a worker from Industrias Navales A Xunqueira, who called the owner directly and he began to spray the fire with a hose just when the Civil Guard arrived. The operation later included the intervention of members of the Bombeiros do Morrazo, Vigo and Ribadumia, as well as Civil Protection from Cangas. The Local Police of Moañés also intervened, which already handed over their proceedings to the Civil Guard.

Also Read  Is it really me? The Ugly Truth About Beauty Filters | Australian lifestyle

Little by little details about the work of firefighters are known. At first, around 10:30 p.m., they focused on shutting down the ship that did belong to the shipyard and was in the scrapping phase. When the rescue boat ‘Salvamar Mirach’ arrived towed the burning glider away from the industrial complex, thus minimizing the risk of the fire causing further damage. The operation was carried out in several attempts, due to the high temperatures that were generated by all the burning fuel and that caused columns of fire every few minutes.

The identity of the ship’s owner is unknown, and it could even have been stolen. From the Brotherhood of Moaña they point out that none of their workers missed their work environment.