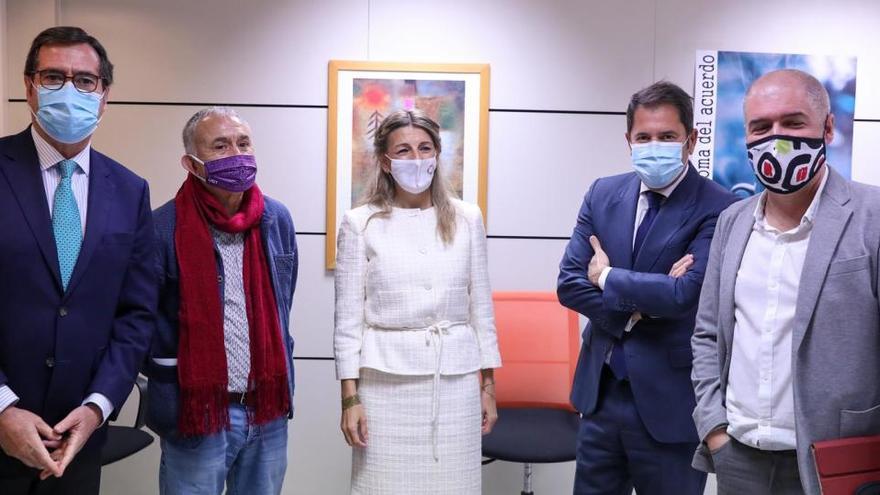 Government and social agents will meet again this Monday, starting at 5.30 p.m., to negotiate the extension of the temporary employment regulation files (ERTE), meeting in which they could close an agreement to extend this tool at least until May 31.

Later, at 7:30 p.m., another social dialogue meeting will begin, this at the highest level, with the aim of addressing changes in the labor market, according to sources familiar with the meeting.

The first meeting to extend the ERTEs took place last Friday and ended with a fair understanding between the parties, who seem to agree to extend them at least until this date, as reported to Europa Press in social dialogue sources.

After this meeting, Government, unions and businessmen convened a new meeting this Monday at 5:30 p.m. hours, to continue advancing in the negotiations, which on this occasion are not expected to be delayed until the last moment, as happened the previous time.

Thus, the Executive told Europa Press that its commitment is to close this negotiation as soon as possible, without exhausting the current period of the ERTE (January 31), as the Minister of Labor, Yolanda Díaz, advanced a few days ago.

According to the sources consulted, The Government has offered the social partners to extend the agreement currently in force, although unions and employers have to analyze the final text of the Ministry of Labor this Monday.

If the ERTE are extended until May 31, lThe tool would be valid until beyond the date on which the state of alarm (May 9) and after Easter, which this year will be celebrated between March 28 and April 4. This new date would thus allow the protection of the tourism sector, one of the hardest hit by the pandemic.

“All parties agree to extend the ERTE until May 31 and that the III Social Agreement in Defense of Employment be extended, with some adjustments, “said CCOO sources, who speak of both technical and other adjustments.

From the UGT, its secretary general, Pepe Álvarez, defended last Friday the need to prolong the ERTE while the pandemic lasts and that they be automatically extended.

“Let’s give stability to the companies, to the workers who are in ERTE, give peace of mind and resolve this issue,” said Álvarez, who asked the Government “not to remove any rabbit from the hat” and to extend this tool under current conditions .

From CCOO they also understand that the current agreement responds to current needs and those that may arise in the face of a third wave of Covid. “Not many changes are needed, although some technical elements and even some clearer wording must be introduced to avoid problems of interpretation,” they pointed out from the Unai Sordo union.

For his part, the president of the CEOE, Antonio Garamendi, has asked that the extension of the ERTE last at least until June and that companies be allowed to adjust templates without having to return the corresponding exemptions to all ERTE workers, but only those corresponding to the worker who is fired.

“Whether we like it or not, there are going to have to be squad adjustments. This is no longer March and companies have solvency problems. What cannot be is that (if they are fired) they are forced to return all the exemptions for having taken advantage of an ERTE when it would be more logical to return the part of that person who could leave, because if not, instead of consolidating positions of work, we are going to destroy many more, “defended the CEOE leader.

Currently, companies under an ERTE are obliged to maintain employment for six months after restarting their activity. If they breach this commitment must return the Social Security exemptions received by all workers of the ERTE and not only for those who are fired. What Garamendi raises is that only the aid of the worker who is fired must be returned.

This idea does not have the approval of the unions, who ask that the current employment commitment be maintained. “The CEOE knows that in France, Italy and Germany the maintenance of employment is one year and these employers of these countries have not presented any type of objection“replied the UGT leader, who added that” it seems reasonable “that” if for every 100 euros that the State has invested in the pandemic, 75 have gone to help maintain the companies, than the minimum that can be required to these is the maintenance of employment “.

Along with the ERTE meeting, this Monday there will be a meeting at the highest level between the Minister of Labor, Yolanda Díaz, and the leaders of CCOO and UGT, Unai Sordo and Pepe Álvarez, and the presidents of CEOE and Cepyme, Antonio Garamendi and Gerardo Cuerva, respectively.

It will be at 7.30 pm and, according to social dialogue sources, the objective is to talk about the Ministry’s projects for the “modernization” of the labor market, which could include the partial reversal of the 2012 PP labor reform.